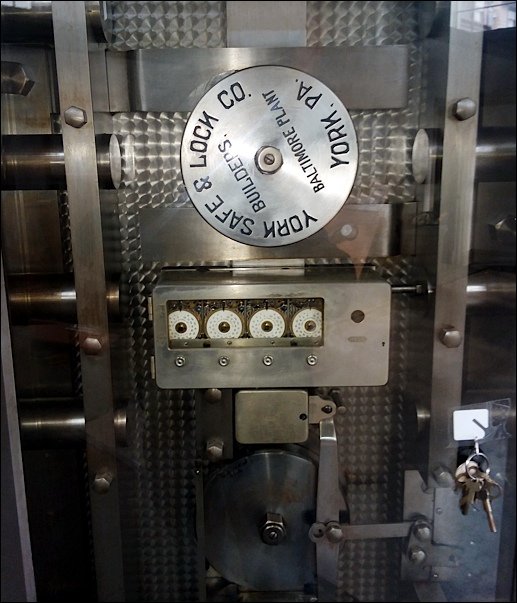 York Safe and Lock vault from their Baltimore Plant

As early as 1920, the Miller Safe & Lock Company, at Wilkins Avenue and Catherine Street in Baltimore, was a subsidiary of the York Safe & Lock Company of York, Pa. J. A. Dempwolf Architects, of York, PA, designed that 1920 Baltimore plant, which still stands about 2-miles west of the Inner Harbor in Baltimore. The York County History Center has the original drawings of that plant in their Dempwolf drawing collection. The drawings are dated June 12, 1920 and September 25, 1920.

A previous post about the Baltimore plant details resulted in comments to the original post by children of employees who worked there. Both commented about the head of the York Safe & Lock Company (i.e. S. Forry Laucks), visiting from York; however what stood out was he never missed walking through the plant every Tuesday afternoon. One reader also claimed the Baltimore plant manager and Laucks had a standing Tuesday lunch reservation, always at the same table, in a Baltimore restaurant. For the workers, the hour before lunch, that day of the week, was constantly spent tidying up the factory for his visit.

I wondered when this bank building, containing the Baltimore made York Safe and Lock vault door, was built. The Evening Journal, of Wilmington, Delaware, issue of April 15, 1926 reported on the forthcoming April 17, 1926, formal opening of the new home of the Fruit Growers’ National Bank and Trust Company, in Smyrna, Delaware. That bank was established as the second bank in Smyrna on June 17, 1876. The bank’s name came from the abundant orchards surrounding Smyrna; prominently growing the famous Delaware peaches. Quoting from that article:

“The vault is located at the rear of the public lobby and behind an attractively ornamented steel grille. The vault is truly a great concentrated and enduring bulwark of strength.”

The York Safe and Lock “vault door is built to the precision of a watch and is of latest approved design. It is 16-1/2 inches thick overall, weighing 20,000 pounds. It includes torch-resisting metal and is of a strength that permits the bank to secure the very lowest obtainable rate of insurance.”

“The floor, sides and ceiling of the vault walls alone are 21 feet thick and of the type of reinforced construction as approved for the Federal Reserve Banks of the country. Inside the concrete walls has been placed a solid steel lining to which has been attached the most ingenuously designed burglar alarm system that has yet been produced. Thousands of feet of wire have been incorporated in the concrete vault construction and an attachment has been made to the door itself, so that it is utterly impossible for anyone, under any condition to tamper with either vault or door without setting off the huge gong that has been so placed as to prevent access to it.”

A 1926 photo, nearly matching the current 2018 photo, accompanied the article. Here I zoom in on the on the top of the 1926 photo to show the original bank name at the top, carved in stone “Fruit Growers’ National Bank & Trust Co.”

Through the years that bank building, at 5 West Commerce Street, has gone through name changes through mergers and acquisitions; from the Fruit Growers’ National Bank and Trust Company, to Farmers Bank, to Mellon Bank, and most recently to Citizens Bank. The last day of bank business, in that building, was August 11, 2017, when Citizens Bank moved that office to the Smyrna suburbs.

In 2018, Centerpoint Church of Delaware purchased the building at 5 West Commerce Street in Smyrna, Delaware. Church member Chris Brown discovered my posts about the Baltimore Plant of the York Safe and Lock Company and submitted the photos.