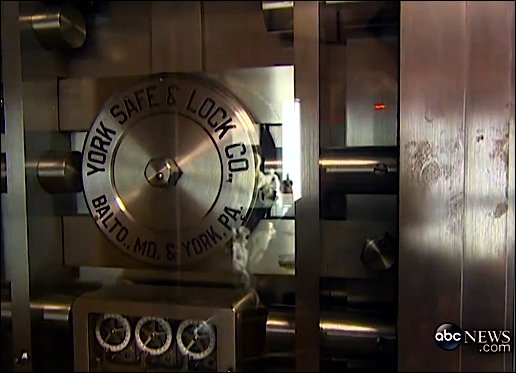 This image of a York Safe & Lock Company manufacturers plate is from a vault door captured within an ABC News story; now available at this link: http://abcnews.go.com/Politics/rare-shakespeares-edition-dcs-folger-library/story?id=31756897

Joe recently brought this image to my attention, via his comment to the YorksPast post: Eliot Ness cracks the York Safe & Lock Company

Just saw a segment on This Week with Stephanopolis about an underground bunker storing Shakespeare works. The Door to the safe said “York safe and lock company” & Balto., MD. & York, PA. Was this an abbreviation for Baltimore? Your excellent article stated that all the plants for the company were in York city in PA. Can you explain the “Balto”

I knew that Baltimore, Maryland was a direct sales branch, plus one of the major export sales offices for York Safe and Lock Company. Therefore my first thought was maybe for export sales, York Safe & Lock placed both the export city and the York, PA factory on the manufacturers plate. However, when Joe informed me this bunker was actually in Washington D.C., near the Capitol, this caused some deeper digging into the collections of the York County Heritage Trust yesterday.

I examined many photos of York Safe & Lock Company manufacturers plates on vault doors. They all only noted the York, PA location. I also found no mention of a Baltimore factory in the York Safe & Lock Co. catalogs. The following 1926 testimonial letter, to the Baltimore direct sales office at 5 West Redwood Street, is from the collections of the York County Heritage Trust. Besides the manufacturers plate, from a vault door captured within an ABC News story, this letter is, thus far, the only other reference uncovered as to the existence of a York Safe & Lock Company factory in Baltimore:

After careful investigation for a period of six months of the fur safes manufactured by the different safe companies in the United States, we decided to place our order with you for one (1) five compartment, three (3) four compartment and two (2) three compartment fur safes, to be manufactured at your Baltimore plant and to be painted mahogany to match the wood in our store.

After these safes were installed, we certainly were glad we did place our order with you, because we consider these fur safes the finest fur safes that have ever been built in the United States.

Your method of doing business and the attention we have received from you proves without any question of a doubt that it certainly is a pleasure to do business with a concern like the York Safe & Lock Co.

It is needless to say that you can use this letter as you see fit and if we can be of any service to you in helping you to make sales, you can refer any furriers in this city or anywhere in the United States to us, as we are now among the many boosters of the York Fur Safes.

Thanking you and wishing you success, we are

My initial search via Baltimore directories from the 1920s for the mystery factory has not produced results. My search will continue. However, if any of my readers can help unlock the mystery of this York Safe & Lock Company factory in Baltimore, please comment.  comment contained key find, resulting in the post: Unlocking the Mystery of Baltimore Factory of York Safe & Lock Co.