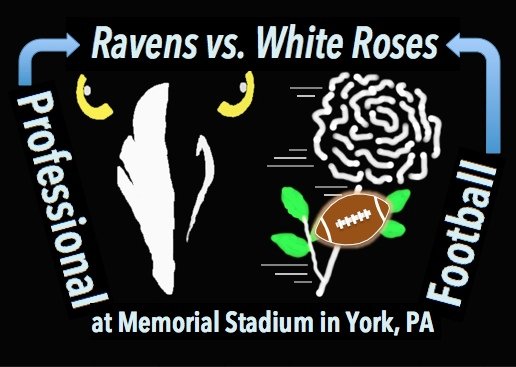 The Monessen Ravens played the York White Roses in a Professional Football game, at Memorial Stadium in York, PA, on Saturday October 8, 1949. The graphic, showing a cartoony running white rose, carrying a football, was inspired by a comment made by Dick Keller. (Illustration by S.H. Smith, 2021)
Posted by Stephen H. SmithAugust 23, 2021 All Posts, Maryland, Pennsylvania, Sports, Various Locations, York County

“Frank Moock’s one-yard plunge for a touchdown on the last play of the game gave the York White Roses a thrilling 21-14 victory over the Monessen Ravens at Memorial Stadium Saturday Night. The victory before nearly 3,000 fans kept York’s winning streak alive at 16, but undoubtedly was the toughest triumph of the entire run. Moock’s score climaxed a 92-yard drive which the Yorkers had started with less than five minutes to play.”

Those are the opening lines in The Gazette and Daily’s sports article published on October 10, 1949. That year, the York White Roses Football Team played in the Tri-State Pro Football League, with teams from Pennsylvania, North Carolina and West Virginia. The previous year, the 1948 squad had a perfect record; winning all eleven games. Their record during the 1949 season just missed being perfect; York’s only loss was to the Weirton Weirters from Weirton, West Virginia, by a narrow 7 to 10 score.

Research for this post was prompted by a recent Dick Keller e-mail: “A friend showed your article with York baseball team beating the O’s in 1955. Dad grew up near Memorial Stadium [in York] and talked of lots of games there. He really enjoyed the hard hitting football teams. They were loaded with war veterans. When Ravens was selected as name of Baltimore team, he recalled the York Roses played the Ravens. I could not believe a football team with a White Roses name. Dad described a big cartoony sign at the stadium of a running rose carrying a football.”

Monessen is a city, along the Monongahela River, in southwestern Pennsylvania. At the time the Monessen Ravens played the York White Roses, steel-making was the prominent industry in Monessen; then having a population of 18,000.

During the 1949 season, Eddie Waleski continued to coach the York White Roses. Many on the York team had college football experience, and a few had professional experience; before joining the Roses. The 24 York Roses’ players, seeing action in the October 8, 1949 football game, were:

During the previous season, i.e. 1948, photos of three well-known players, with close ties to York, were pictured in the following Gazette and Daily spread. The newspaper caption: “Pictured … are three Yorkers who will see action tonight when the York Roses’ football team opens its 1948 season. Left to right are: Charlie Cuffaro, a guard; Milt Jones, a tackle; and Wilbur Hunter, an end. All three were members of the York Roses last season.” Thus these three players were members of the York Roses’ football team, at a minimum, for the 1947, 1948 and 1949 seasons.

I decided to do a little research, on Ancestry.com, to check out Dick Keller’s comment about the teams being loaded with war veterans. Records show: Charlie Cuffaro served in the Navy, Milt Jones served in the Army, and Wilbur Hunter served in the Marines. They all entered the service during their teens. All were York High athletes. Milt Jones was co-captain of the football team in 1943, during his senior year; which was cut short a few months when he enlisted early in 1944. Charlie Cuffaro and Wilbur Hunter left school even earlier to go directly into the work force; before enlisting.

Charles J. Cuffaro was born November 3, 1924. At the time of entering the service, he resided at 604 South Duke Street in York. He enlisted in the U.S. Navy on November 11, 1942 and was discharged February 17, 1946. Charlie Cuffaro died January 6, 2013 and is buried in Gate of Heaven Cemetery, Hamilton County, Ohio.

Wilbur T. Hunter was born May 5, 1924. At the time of entering the service, he resided at 514 East Boundary Avenue in York. He enlisted in the U.S. Marine Corps on September 30, 1943 and was discharged August 31, 1946. Wilbur Hunter died June 6, 2004 and is buried in Lebanon Cemetery, North York, York County, PA. I wonder if Wilbur Hunter’s grave in recognized as a WWII Veterans grave in Lebanon Cemetery; because his service in the Marine Corps is not noted in his obituary.

The earliest discovered reference to a professional football team known as the “York White Rose Football Team” appeared in the York Daily of September 13, 1928; in which they were re-organizing the independent club. At that time, they played home games at Williams Park. In the early 1930s, their home games per played at Eagle Park, north of York. However by the mid-1930s, attendance had dropped off; such that the following paragraph appeared within an article in The Gazette and Daily of October 30, 1935:

“The York Roses professional football team has not disbanded, according to a statement made by Business Manager Hen Ness last night. The club will do a lot of traveling during the remaining days of the present season, and if the attraction warrants it, will stage probably one or two games in York, providing that the players are assured a substantial guarantee for their efforts.”

York White Roses Football was inactive during World War II. In 1946, the team was re-established, under General Manager and Coach Eddie Waleski; as a member of the Pennsylvania State Pro Football League. Their home opener that year was on Wednesday September 18th, under the lights at Small Athletic Field.

Prior to the third game of the 1949 season, the number of Black players on the White Roses Football Team increases with the arrival of Barney Ewell; joining Wilbur Hunter. The Gazette and Daily of September 30, 1949 reported: “Barney Ewell, famed Olympic sprinter from Lancaster, impressed Coach Eddie Waleski with his football talents last night and was signed to a contract with the York Roses.”

The York Roses Football Team folded following the 1954 season; attributed to a significant drop off in attendance. That year they played in the Inter-State Football League; with the York Roses home field starting at Small Athletic Field and finishing at West York Memorial Field.