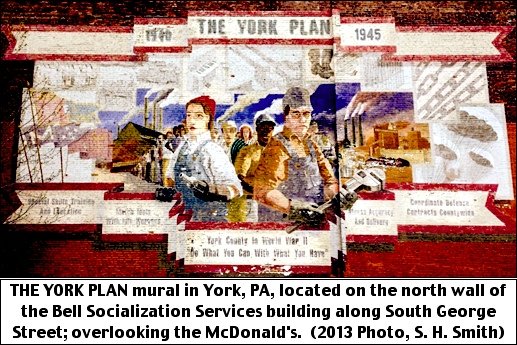 Nine weeks of filming on location in York during the fall of 1942 resulted in an epic movie telling the story of the “York Plan.” Have you ever seen, or know something about, that U. S. Army film?

The Philadelphia Inquirer, issue of November 22, 1942, reported on that movie filmed on location in York, Pennsylvania. The whole headline of the half-page article by Robert J. Lewis was “Workmen Star in Film Showing YORK PLAN As the Drama of State’s Industry.”

The article begins by describing a scene between William S. Knudsen, director of production for the War Department, and machinist Jesse Vann Breighner in a manufacturing plant in York, PA. Another article notes the factory, where that scene took place, was the York Safe and Lock Company plant.

William S. Shipley was another of the local “actors” in the film. In the movie, Shipley “reenacted his part as chairman at the meeting of manufacturers on June 29, 1940, when the plan first was discussed. Recently Mr. Shipley was appointed by President Roosevelt to membership on the board of the Smaller War Plants Corporation of the War Production Board, organized to give officials aid and encouragement to little plants not already converted to war work.”

Veteran scriptwriter, Robert Richards, arrived in town a week before the nine weeks of filming in York, Pennsylvania. The film crew of fourteen was assembled by Major Frank Capra; winner of the Academy of Motion Pictures’ prize for directing “It Happened One Night.” The director of the film was one of Hollywood’s most celebrated directors, Robert J. Flaherty; known in the motion picture world as the father of the documentary film. The crew included Private Jeffrey Lynn, of the Army Signal Corps, who had previous motion picture acting experience.

Another photo, included with The Philadelphia Inquirer article, shows one of the make-shift platforms fabricated to get good camera angles during filming in the factories. Private Edward Saeta, cameraman, has the megaphone while Jeffrey Lynn reviews the script. On the platform is Jay Reacher; with helpers.

It appeared the November 22, 1942, article was describing a film already shot, so I started looking at newspapers at least nine weeks earlier, i.e. in September of 1942, to locate additional details. The Philadelphia Inquirer had a brief bit about the filming in York, Pennsylvania, within an article about the York Fair in their September 11, 1942 issue:

“This town, as all informed citizens know, is the home of the York Plan, which is nothing more than an industrial system under which the larger industrial plants farm out part of their work to smaller plants. As a result all industrial organizations in York, large and small, are operating at capacity. The York Plan has made such a hit with the Government that the Army has sent to the town specialists who are now engaged in making a documentary film of the industrial bee-hive. Before long you will see this film in your neighborhood movie house.”

Please comment if you have seen this 1942 “York Plan” documentary film.

The earliest details discovered about this movie appear in an August 11, 1942, local article in The Gazette and Daily. That article reported, “a short sequence of the film was taken Sunday [August 9th], when Lieut Gen. William P. Knudsen, director of Production of War Department, visited the city. Knudsen is pictured with Jesse V. Breighner, a machinist at the York Safe and Lock Company. Photographic crews took pictures giving local atmosphere yesterday [August 10th] morning. Churches and the Historical Society were included in yesterday’s schedule.”

“According to Lieut. Tom Curtis the picture has been planned to show the organization of the war time effort here and its development. York was chosen as the central point of the picture because of the large number of citizens engaged in industries holding government contracts.” During the film crew’s nine weeks in York, their headquarters was the Colonial Hotel.

An 80-ft. by 28-ft. mural depicting the THE YORK PLAN is located on the north wall of the Bell Socialization Services building along 160 South George Street; overlooking the McDonald’s. The mural was painted in 1999. My photo from 2013 shows fading; however now, five years later, the mural has significantly deteriorated with flakes of paint peeling from the wall.

The ribbon of text panels at the bottom of the mural describe some of the key elements of The York Plan: “Special Skills Training And Education,” “Match Tools With Idle Workers,” “York County In World War II; Do What You Can With What You Have,” “Stress Accuracy And Delivery,” and “Coordinate Defense Contracts Countywide.”

Various production award flags are depicted on the left side of the mural. Nineteen York County war production plants were granted the Army-Navy “E” Award during World War II. The “E” Award was for Excellence in Production; it was the highest honor given industry in recognition of outstanding production of necessary war materials.

My next post will explore the award winning York plant associated with the parachutes shown on the right side of the mural.