The first fully enclosed shopping mall in York County opened in the Fall of 1968. Today its location is notably marked by a Wal-Mart Supercenter along East Market Street in Springettsbury Township. When ground was broken on January 31st 1967, this shopping hub was initially called the Lincoln Mall; however the name was changed to York Mall by the grand opening on October 3rd 1968.

The mall contained four fountains; the most notable was the Jumping Fish Fountain within the northern mall entrance to Hochschild Kohn, a large Baltimore-based, two-story department store in the center of the mall. In fact a walk through Hochschild Kohn was required to stroll the whole mall connecting the large end anchors; Montgomery Ward at the north end and J.C. Penney at the south end, along East Market Street.

A community room was located at the top of an elaborate staircase that overhung the Jumping Fish Fountain. This photo was taken, while standing at the mall entrance to the William Tally House, a very popular cafeteria-style restaurant.

Please contact me if you have better quality photo of the York Mall sign along East Market Street. This photo can be dated to the Spring of 1969. I remember taking a date to see “Where Eagles Dare” at the York Mall movie theater during Spring Break of my freshman year at Penn State. One can barely read at the bottom of the sign, “Trans-Lux Theater, Now Showing, Clint Eastwood, Where Eagles Dare;” the classic World War II action film, shot in the Bavarian Alps and also staring Richard Burton and Mary Ure. York newspaper ads note “Where Eagles Dare” opened at this theater on March 26th 1969.

The Trans-Lux started out as a magnificent 820-seat movie theater with a fabulous sound system. It was located in the north end of the mall; next to Montgomery Ward. In 1975 a wall was installed down the middle of the theater to create twin theaters; I believe they called them the Trans-Lux Gold and the Trans-Lux Blue. The end result was long narrow theaters with screens half the size of the original screen and mediocre sound systems.

Besides the mall complex, three stand-alone buildings were initially on the mall property. The Northern Way and East Market Street corner contained an A & P Food Store. This building now houses Party City and Chunk E Cheese’s, with Panera Bread anchoring an addition to the former grocery store.

Besides the three anchor stores, McCrory’s was, by far, the next largest store in the York Mall. It was considered the showcase store in the McCrory’s chain. The store was in close proximity to the McCrory’s Distribution Center, located directly next door; in fact they had a ramp that essentially went from the back door of their store, right up into the distribution center.

Hochschild Kohn vacated the mall in 1975, at which time the Bon-Ton moved in. The Bon-Ton still has a presence, not with a store however their Corporate Offices occupy the second floor over the Burlington Coat Factory. 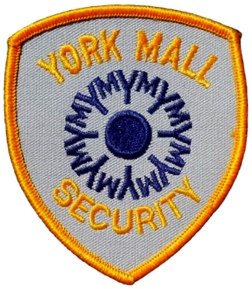 The symbol of the York Mall was the letters “Y” and “M” repeated in a circular pattern. The symbol is shown in the center of a York Mall Security patch; purchased on e-Bay. One of the reasons often touted for converting enclosed malls to exterior storefronts is the escalating insurance and security cost associated with an enclosed mall.

A 1971 newspaper ad contained an alphabetical listing of the over 60 stores within the York Mall. See how many you remember. If you have stories of the mall or any of these stores, please comment. I’ve already mentioned the major stores: Hochschild Kohn, J. C. Penney, Montgomery Ward, McCrory’s and Bon-Ton arriving at the mall during 1975. I’ve attempted to group the other stores into categories; let me know if I made any errors.

Other stores included: a Docktor Pet Center and a U. S. Post Office substation. 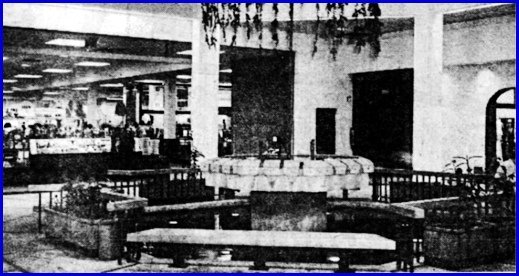 This is from an undated newspaper clipping; it shows another of the four fountains within the York Mall. The most common name for this fountain was Jack’s Fountain, since it was in front of the Jack’s store, at extreme right in clipping. The store at the left side in the clipping is the southern mall entrance to Hochschild Kohn or Bon-Ton.

The remaining two mall fountains were located where the entrance corridors from the parking lot intersected the main mall corridor. All of the fountains featured benches or flat surfaces for shoppers to sit on.