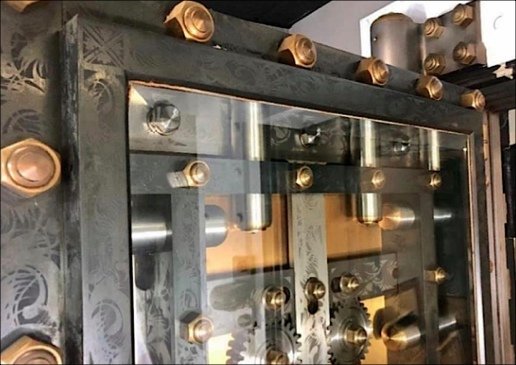 Christopher Aslam recently submitted photos of an early York made Bank Vault Door that was originally installed in Plymouth Five Cents Savings Bank in Plymouth, Massachusetts. I offered to answer his questions; however had to wait until last week, when the York County History Center opened; following their shutdown to help reduce the spread of COVID-19.

York Safe & Lock Company catalogues, in the York County History Center collections, do not contain the pictured vault design directly; however comparing the design and artistic elements in the submitted vault door to the evolution of those elements in available catalogues, does point to a 1890s to very early 1900s time frame for the bank vault door.

The York Safe and Lock Company was founded in 1882. An 1884 Company Catalogue primarily focuses on their line of small safes for offices, however also includes several Bank Vault Door options; with some illustrations containing artistic details, like those on the submitted photos. On May 2nd, 1894, the entire York Safe and Lock factory was destroyed by fire. The factory was immediately rebuilt much larger, fitted with the most modern manufacturing machinery, and resumed shipping product in August.

In the later 1800s, bank architects began hiring consulting engineers that specialized in bank vault design. Benjamin F. Tripp [1860-1940] was one of those early pioneers in that business. Such a specialist provided the vault design details, i.e. characteristics and thickness of vault’s floor, ceiling and walls and how they would be reinforced with steel; plus specifying the protection system, the vault door parameters and his view of the acceptable vault door manufacturers, capable of providing a quality vault door to his requirements.

Early on, the United States Treasury Department and Federal Reserve Banks had adopted vaults produced by the York Safe & Lock Company in York, PA as their standard. This advertisement from the 1922 International Banking Directory also states “York safes and vaults have been installed successfully in banks in nearly every country throughout the world.”

Of the instances where the paths of Benjamin F. Tripp and the York Safe & Lock Company cross, perhaps the most significant is the thirteen vaults within the 1922 Federal Reserve Bank of Boston.

The March, 1922, issue of Trust Companies, a monthly magazine devoted to trust companies and banking, reported on the vaults for the Federal Reserve Bank of Boston. Quoting from page 352: “An interesting feature of the equipment of the new building recently completed for the Federal Reserve Bank of Boston is the massive vault equipment installed by the York Safe & Lock Company of York, Pa. Over three million pounds of steel and steel products were employed in the manufacture of these vaults. They represent the third largest and heaviest bank vault system ever constructed. There are thirteen vaults in all located in various parts of the building.”

“The basement vault measures nine feet high by thirty-four feet wide by thirty-four feet deep inside and is constructed of concrete walls several feet in thickness laid up with a specially designed form of steel reinforcement never heretofore used in the building of such work.”

“This vault is equipped with a main and an emergency entrance. Each entrance has an outer door and inner door. Each outer door measures approximately twenty-one inches in thickness and each inner door five inches in thickness. The thickness of these doors are formed by the various layers of steel and steel alloys to resist any form of attack including the use of dynamite or other explosives by mob attack.” Seven of the thirteen vaults are identical, as shown in the following photo; appearing in a 1923 issue of The Architectural Forum.

The Federal Reserve Bank of Boston, completed in 1922, was located at 250 Franklin Street. In 1977, the Boston Fed moved to new headquarters at 600 Atlantic Avenue. The 1922 building was repurposed as Langham Hotel Boston; with the main bank vault repurposed into a commercial kitchen serving several of the hotel restaurants.