York is In Danger of Losing the Susquehanna Trail during 1923

Story of the Susquehanna Trail in the Good Roads Movement: Part 15 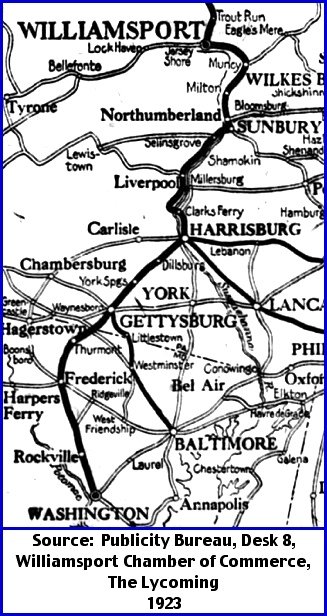 If you examined the map closely in last Friday’s post, The Susquehanna Trail as a Ribbon of Concrete, you can see the mapped highway, heading northward from York, is actually the road curving towards the river; i.e. York Haven. After five years, York had made virtually no improvement to large sections of the designated Susquehanna Trail north of York. This was the reason many people traveling the unimproved Trail between York and Newberrytown were still getting stuck in the mud during 1923.

It did not sit well with some Williamsport people, where the idea of the Susquehanna Trail originated, that York was the only county lagging behind in supporting the Trail as the top priority. The Williamsport Chamber of Commerce started to print maps, as shown in this post, to rekindle their support for a Gettysburg route of the Susquehanna Trail.

The Williamsport Chamber of Commerce sent speakers to new Trail route towns, such as Gettysburg, Thurmont, Frederick and Rockville. They referred to the old routing of the Trail as being from Harrisburg through York; while firing-up communities on the new route of the Trail to press forward and demand a Susquehanna Trail route change. The Publicity Bureau of Gettysburg did just that, as reported by The Gettysburg Times issue of December 11, 1923: “The condition of the Harrisburg-York road will be called to the attention of Highway Commissioner Wright by the Gettysburg Publicity Bureau as further argument for the designation officially of the Harrisburg-Gettysburg-Washington route as the Susquehanna Trail.” 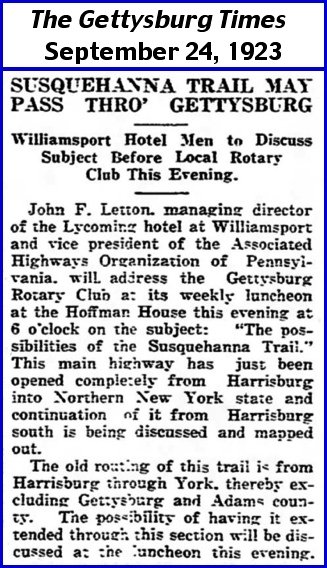 The renewed Susquehanna Trail organization, within Gettysburg, formed as a result of the following kick-off talk on September 24, 1923:

John F. Letton, managing director of the Lycoming hotel at Williamsport, and vice president of the Associated Highways Organization of Pennsylvania, will address the Gettysburg Rotary Club at its weekly luncheon at the Hoffman House this evening at 6 o’clock on the subject: “The possibilities of the Susquehanna Trail.” This main highway has just been opened completely from Harrisburg into Northern New York state and continuation of it from Harrisburg south is being discussed and mapped out.

The old routing of this trail is from Harrisburg through York, thereby excluding Gettysburg and Adams County. The possibility of having it extended through this section will be discussed at the luncheon this evening.