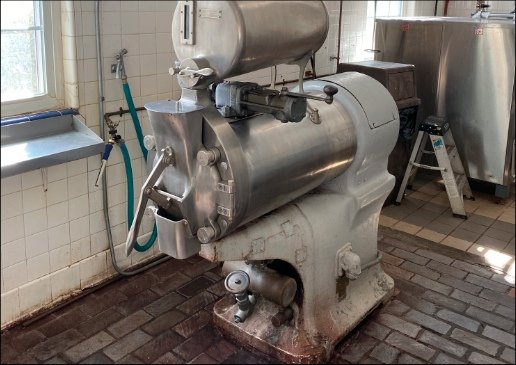 Robert Fraser would like to share experiences operating a vintage ice cream freezer with others still using 1930s freezers manufactured by YORK Ice Machinery Corporation. Robert’s grandfather, Hans Erikson, Jr., took delivery of a YORK freezer in 1937; when he started the ice cream business at his dairy. That freezer is still used at Erikson’s Ice Cream Stand in Maynard, Massachusetts; because it makes better ice cream, compared to that made in modern freezers.

The ice cream freezer was produced at YORK’s Canton Plant in Ohio; which became YORK Ice Machinery Corporation’s third major manufacturing facility in 1927. From 1927 until 1939, that plant primarily produced YORK’s extensive dairy equipment line of products. The story of that facility was told in the post YORK Ice Machinery building repurposed as Hercules Apartments.

At times, the data plate on the ice cream freezer, used at Erikson’s Ice Cream Stand, has been covered with paint. The serial number of the freezer is still visible as No. 2382373.

Albert T. Light was the engineering specialist on ice cream freezer design at YORK; upon joining the company in 1926 when it was known as the YORK Manufacturing Company. Albert had a small ice cream freezer manufacturing business in the Bronx, NY, when hired by Thomas Shipley at YORK. Albert spent many years as Chief Engineer at the Canton Plant. In his return to the York Plant, the 1940 U.S. Census lists his occupation as Mechanical Engineer, Air Conditioning; residing at 447 West Market Street in York, PA. Albert Light was a member of the 25-Year Club of York Corporation; he died in 1956 and is buried in Greenmount Cemetery in York.

It should be noted that patent illustrations are provided to illustrate the patentable claims made within patent applications. Product drawings often have various changes without departing from the spirit and scope of the invention disclosed in the patent.

Production of YORK’s continuous ice cream freezers, per Patent 1,773,912, hit the market in 1932. As part of the sales role-out, the York Dispatch of November 18, 1932 reported: “A group of engineers, including many from York, who are attending the sessions held by the York Ice Machinery Corporation for its branch engineers, tonight will take a special Pullman on the Clevelander for Youngstown Ohio, where they will inspect the new York continuous ice cream freezer in operation at a prominent dairy.”

“They will then motor to Massillon, Ohio, for an inspection of a York stainless steel milk cooler at the Lusas Dairy. The party will then motor to Canton for an inspection of the York Canton plant and final discussion relating to the engineering and design of new and improved equipment for the dairy and ice cream industries. With a closing dinner in Canton, the engineers from the various York branch offices, throughout the continent, will carry the benefits of the week’s meeting to each of the 71 direct factory branches in the United States.”

Robert Fraser noted his grandfather Hans Erikson, Jr., met with James Tweedell in 1936 when initially considering establishing an ice cream business at his dairy. James C. Tweedell, was a sales engineer at the New York and Boston branch sales offices of York Ice Machinery Corporation during much of the 1930s. Tweedell joined York as part of the Graduate Engineer Training Program in 1924 and after working at branch sales offices, in 1942 was promoted to a position in York as General Sales Manager.

Since 1937, Erikson’s Ice Cream Stand has been located at 12 Great Road in Maynard, Massachusetts.

The following photo shows the robust construction inside the 1937 YORK Batch Ice Cream Freezer used at Erikson’s Ice Cream Stand. Blades scrape icy slush, which forms on the barrel wall; due to the freezing effect of vaporizing refrigerant surrounding the barrel. The icy slush, progresses through ice floc, broken floc, ice discs, and ripening phases, in a continuous process, before exiting the ice cream freezer.

If you observe this design configuration inside your vintage ice cream freezer, it may be a YORK. Check the data plate, and if the data plate is covered with paint, scrape off the lower part. If it says “York Ice Machinery Corporation, Canton, Ohio,” Robert Fraser would like to share experiences operating these vintage ice cream freezers, manufactured by the YORK Ice Machinery Corporation.