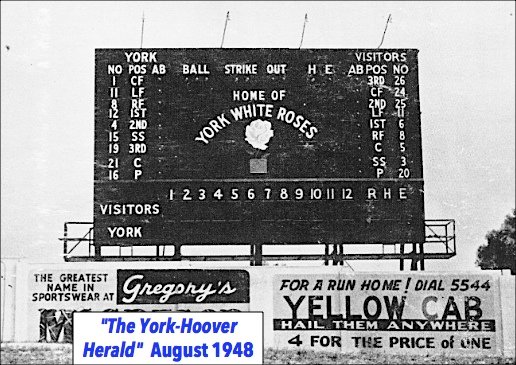 Bill Eaton has an interest in the present location and the wording on a Memorial Plaque originally affixed to the scoreboard installed by York-Hoover employees at Memorial Stadium in York. Within collections of the York County History Center, a 1948 article, with photos, was discovered in “The York-Hoover Herald,” a monthly publication by and for the employees of York-Hoover Corporation, which answered many of his questions.

Bill provided an operational description of the custom built York-Hoover scoreboard. “The operation of the electric scoreboard was a combination of physical placement of placards by an attendant on the scoreboard and a scorer behind home plate remotely controlling bright indicator lights built into the scoreboard.”

“Before each baseball game, after the managers hand their line-up cards to the umpire, the scoreboard attendant climbs side ladders to slide-in the line-up placards, that is player number and position, on the YORK and VISITORS sides of the scoreboard. During the game, the scorer electrically lights, the “at bat” player, and lights number of balls, strikes, outs, and either a hit or an error. The scoreboard attendant uses number of runs placards to keep scoreboard up to date, by inning, as the game progresses.”

Bill Eaton continues: “An employee committee of the York-Hoover Corporation had been looking for a project to honor fellow employees service during the war. They elected to install a grand scoreboard, to replace an antiquated temporary scoreboard at Memorial Stadium. On their own time, employees of York-Hoover designed and fabricated a metal electric scoreboard at the York-Hoover Body Division along Wheatfield Street.” The following photo shows workmen loading a section of the Electric Scoreboard onto a truck, for transportation to Memorial Stadium in 1948.

In 1947, Memorial Stadium, much later renamed Bob Hoffman Stadium, was constructed on the Stauffer farm in Spring Garden Township. The majority of the remainder of the farm would later be developed as the present Veterans Memorial Park.

The York White Roses played their first baseball game on the grounds of Memorial Stadium on June 3rd, 1947. During the first month of ball games, the spectators stood, brought own chairs, or sat on temporary bleachers; as erection of permanent bleachers and other stadium features continued. Stadium construction was essentially complete in time for the July 15th, 1947, initial night baseball game under the Memorial Stadium lights.

In 1948, few minor league baseball fields had scoreboards as nice as the one fabricated by York-Hoover employees. Two 1,000-foot electric cables, a 44-conductor totalizer cable and a 3-conductor power cable, connected the scorer’s box, behind home plate, to the scoreboard behind the center field fence.

This photo shows sections of the Electric Scoreboard being offloaded by York-Hoover workmen and temporarily stacked against back of left field stands at Memorial Stadium.

Quoting the introductory paragraph from the article in the August 1948 issue of “The York-Hoover Herald:” “The electric Scoreboard, finished at the Body Division, erected and fully equipped, was donated to the York Memorial Stadium July 15, 1948, designated as York-Hoover night. A crowd of 3,150 fans attended the ceremonies. The York-Hoover family occupied the stands in left field as guests of the company.”

This photo shows the structure and foundations, which support York-Hoover’s Electric Scoreboard behind center field wall at Memorial Stadium.

Quoting another paragraph in the August 1948 issue of “The York-Hoover Herald:” “The memorial plaque in the center of the scoreboard was unveiled by Mrs. Henry Gettle, wife of the late Henry Gettle who formerly was president of the AFL union at the Body plant. York-Hoover President H. W. Stone gave a brief talk as follows: “My fellow employees of York-Hoover have asked me to present to the Memorial Stadium, this electrically operated scoreboard as a memorial to their fellow employees of both divisions who gave their services, and in some cases their lives, during the last World War. May I here emphasize the fact that this scoreboard is from the employees of York-Hoover and not from the Corporation.”

This is a photo of the memorial plaque, located beneath the White Rose, near the center of York-Hoover’s Electric Scoreboard at Memorial Stadium.

Quoting the wording on the memorial plaque: “This scoreboard donated to the Memorial Stadium by the employees of the York-Hoover Corporation as a memorial to their fellow employees of both divisions who gave their services and in some cases their lives, in the cause of freedom. It is dedicated to the youth of York and York County in whose hands the future of this city, state and country squarely lies. —July 14, 1948—“

Bill Eaton shared: “My Dad often talked of Earl Alloway and Elmer Ropp. Both were Hoover Body Works friends killed in action during World War II. A few years before Dad died, we made a trip back to York. He was disappointed the scoreboard memorial was gone. We asked a few people if the memorial plaque was saved. Maybe displayed somewhere else. Nobody knew anything about the plaque.”

Bill Eaton was Google searching for information about York-Hoover and the memorial when he discovered my posts about the Jeep; and posed questions answered with this post. Everything except; what happened to the memorial plaque?