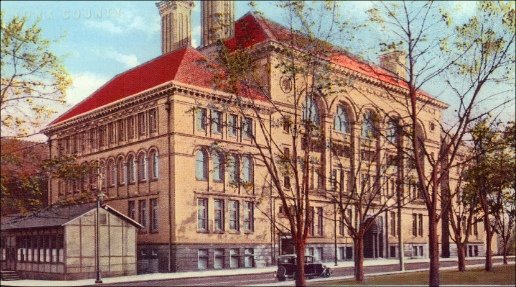 In 1926 the York High name was removed from the school building on the northeast corner of West College Avenue and South Beaver Street. Since then, the high school in York, Pennsylvania, has been officially named after William Penn. This post provides details of the 1926 meeting where York High became William Penn Senior High School.

After being established in 1870, enrollment at York High School grew rapidly, such that the student body outgrew the first two school buildings they occupied by the end of the 18th Century. The third location of York High was built upon Potter’s Field, at the northeast corner of Beaver Street and College Avenue; overlooking Penn Common.

The York High on Penn Common was first occupied during the 1899-1900 school year, with a student enrollment of 405 pupils. The name chiseled in stone over the main entrance was simply York High School, with two years; 1870 was the year York High was established and 1897 was the year ground was broken to construct the school building.

By the mid-1920s student enrollment soared. The third York High School was no longer large enough to house the entire student body. Portable classrooms were set up, around the school, to house some of the freshmen students. The School Board initiated discussions for the construction of a new high school building; neighboring the present York High School along College Avenue.

A question that I occasionally get asked, during my local history talks around the county, is: Why was York High renamed William Penn Senior High School?

While preparing for a Class of 1957 reunion talk, which I presented yesterday, I decided to dig deeper, to see if I could uncover a definitive answer. I thought the name change had to be a major School Board decision, so I started looking through newspaper accounts reporting on those meetings. I discovered articles in several newspapers, reporting on the confrontational School Board Meeting where the High School name change was adopted.

Before I describe that 1926 School Board meeting, some relevant background is warranted. In 1921, Miss Mary Owen, a former school teacher, was the first woman elected to serve on the Board of School Directors for the York City School District; in fact she was the first woman elected to any position within York City. Two years later Mrs. Mabel McClune Sullivan, a former York High teacher, was elected to the school board. Both women participated in the School Board decisions impacting the building of the new high school.

Around the nation during the 1920s, school districts were increasingly opting for the structure of a Senior High School and one, or multiple Junior High Schools, with multiple Elementary Schools. The Board of School Directors for the York City School District adopted this structure early in the decision making process for the new high school.

At a School Board meeting during the Summer of 1926, J. William Stair, chairman of the building committee, brought the matter of naming the new high school building before the board; as the deadline for making that decision was fast approaching; in order to get the stones cut to place the name in stone over the College Avenue entrance of the new building, facing Penn Common.

Miss Mary Owen suggested the new building be named the “William Penn Senior High School” and that the name “Hannah Penn Junior High School” be adopted for the old high school building; sitting next door. She cited numerous reasons of historical character for so naming the buildings.

Miss Owen finally offered a motion that the new building be named as stated and Director Horace Faber seconded the motion. During discussion, many on the Board thought the idea made sense, especially since William Penn Senior High School and Hannah Penn Junior High School would be sitting side-by-side overlooking Penn Common.

However Director John L. Gerber called attention to an action of the old board designating the plans as being for a new senior high school, in the belief that the building already had been officially named. Director Bird H. Loucks suggested rescinding Miss Owen’s motion.

Secretary David N. Crider was appealed to; he retrieved and read the minutes of an earlier session of the board, showing that Harry W. Dietz, then a director, had offered a motion, which was adopted, providing that “the plans hereafter be designated as plans for A Senior High School for the City of York, Pennsylvania.”

“A Senior High School for the City of York, Pennsylvania” was a rather lengthy name to be chiseled in the stones to be placed over the College Avenue entrance of the new building, facing Penn Common.

A vote was taken on Miss Owen’s motion and the name “William Penn Senior High School” was officially adopted for the new building, per this action by the Board of School Directors on July 15th, 1926.

Miss Owen then moved for the adoption of the name “Hannah Penn Junior High School,” to be the official name of the old high school building; sitting next door, when it becomes a junior high school. This motion was properly seconded. Confrontational discussions amongst board members ensued. Mrs. Mabel McClune Sullivan and Miss Mary Owen took the position that several of the directors were averse to naming the building in honor of a woman, even though she was such a remarkable woman as Hannah Penn.

Over the years, even at the State level, there were attempts to enhance the recognition of the significant contribution Hannah Penn made during Pennsylvania’s formative years. Thus naming York’s neighboring schools, situated on Penn Common, for William Penn and Hannah Penn was deemed an appropriate and fitting tribute.

The vote on Miss Owen’s motion was finally taken, with all voting in favor except two directors, John Gerber and Bird Loucks; each responding with the statement “not voting.” “Hannah Penn Junior High School” was now the official name of the old York High, after it was converted to a junior high school. When that occurred, it became the first school building in the city named for a woman.

Toward the end of 1926, York’s fourth high school building, the new William Penn Senior High School was nearing completion. At a School Board meeting on December 9th, 1926, T. W. Birchall was awarded the contract to remove the York High School chiseled lettering from the old York High building and then to carve on the entrance stones, the inscription “Hannah Penn Junior High School.”

The building at northeast corner of West College Avenue and South Beaver Street became the first school building named for a woman in the City of York. Student use of the building ceased in 1959 and the building was demolished in 1965, to create a parking lot.