In September of 1927 a new high school building opened in York, Pennsylvania; shown at the left side of this aerial photo taken by Karl Ort. William Penn Senior High School was built opposite Penn Park on the north side of West College Avenue, between South Beaver Street and Park Avenue. Just about where the entrance to the auditorium was located in the new high school building, a large covered vault had existed. The vault was approximately 75-feet long by 35-feet wide and was one-story high. An 1887 map, containing this vault, marked it as (Old); but how old and what was it used for?

“This aerial photo was taken by Karl Ort, a local aviator” is the photo credit line that appeared in The York-High Weekly. Also in the photo, on the right side facing Penn Park, is the former York High building, which was opening in 1899; having been built on Potter’s Field. Once the new high school building opened in 1927, that school building to the east of South Beaver Street became Hannah Penn Junior High School. The new Post Office building, located on North George Street, can be seen in the background, above the Junior High. The Hannah Penn Junior High School was later torn down to create a parking lot for St. Patrick’s Church located immediately behind, i.e. north of, the school building. 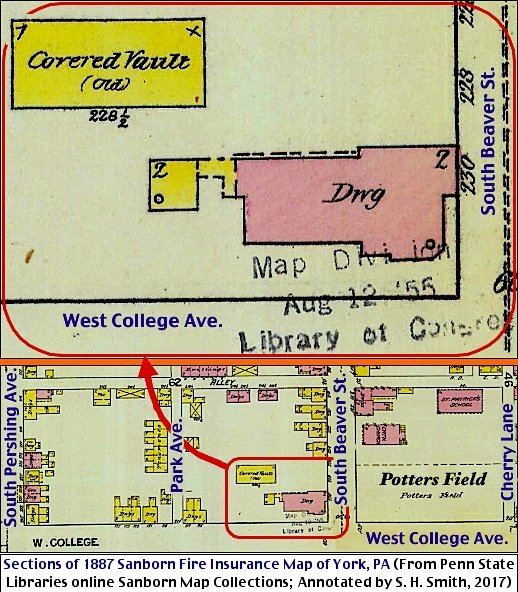 I’ve observed that building and street widths are drawn pretty accurately to scale on Sanborn Maps. Hence I’ve been able to estimate the size of the old covered vault to be 75-feet long by 35-feet wide and, as noted in the upper left of the vault on the map, it was one-story high. The 228-1/2 below the vault is the street address: 228-1/2 South Beaver Street.

I’m still searching for what this vault was used for, although I know that William H. Kurtz owned the property near the time of the 1887 map, however by that time it was already “Old,” therefore I doubt that W. H. Kurtz built the vault. I wonder if this vault had a use during the Civil War or possibly the Revolutionary War.