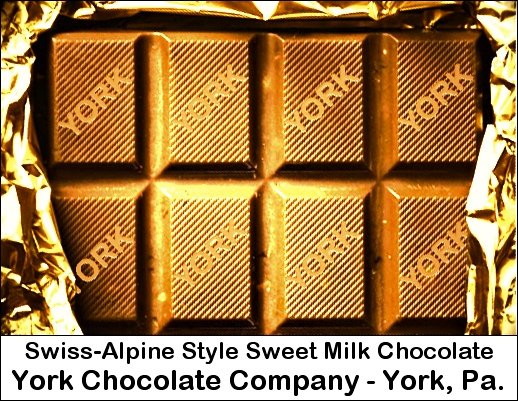 York Chocolate Company was established in 1919. In 1920, the company obtained a trademark on their brand of chocolate: “Swiss-Alpine Style Sweet Milk Chocolate.” Click on this LINK for a yorkblog.com Full View of the original illustration in this post if details are cut off in the cropping of illustration, or if it has been removed from the ydr.com site.

In this Part 2, further details about the York Chocolate Company, including the Hershey connection, are shared, complimenting the story of my discovery of the Chocolate factory in York Revolution’s centerfield.

I reviewed a copy of the January 20, 1919 Charter for the York Chocolate Company at the York County Archives. The corporation was formed “for the purpose of purchasing, manufacturing and selling cocoa and chocolate and all the products thereof.” The shareholders of the company were: D. Frank Magee (York, PA) 700-shares; D. F. Magee (Lancaster, PA) 10-shares; and Charles H. Moore (York, PA) 10-shares. $280,000 in capital was raised.

D. Frank Magee started planning this enterprise April 6, 1918, when he purchased a vacant 4-story, brick factory building on the northeast corner of North Duke and Hay Streets in York. Newspapers reported the Sphinx Motor Company formerly occupied that building. D. Frank Magee and his wife Esther sell that property to the York Chocolate Company on January 30, 1919; ten-days after the Charter was granted.

Within weeks, the factory was fully equipped with all the machinery to produce milk chocolate, such as: Chocolate Mixers, Racine Depositors, Bausman Disc Refiners, Kent Refiners, Chocolate Coolers, plus Ferguson and Haas Wrapping Machines. D. Frank Magee had the factory producing chocolate in record time. All the while he is living with his wife and children at 663 Linden Avenue in York, PA.

Based upon how quickly the factory was put into operation, it was obvious that D. Frank Magee had prior chocolate making experience, however York newspapers did not mention those details. During my wider search, I discovered an October 2, 1916 issue of the Lebanon Semi-Weekly News reporting: “In East Hershey, the imposing residence of D. Frank Magee is nearing completion.” As a result, I suspected Magee received his experience at the Hershey Chocolate factory.

However, it was the August 12, 1916 issue of the Harrisburg Telegraph where I found the definitive answer, in a little item on page 4: “Six houses are in the course of building at Hershey, the most elaborate being the handsome residence of D. Frank Magee, superintendent of the Hershey Chocolate Company.”

There are all kinds of possible scenarios as to why D. Frank Magee left, or was forced to leave, such a prominent position at the Hershey Chocolate Company; sometime between late-1916 and early-1918. If it was simply Magee’s decision, to start his own chocolate company, it turned out to be a bad choice; since the York Chocolate Company failed prior to seeing the decade of the 1930s.