I received several nice comments to both of my York Haven posts of last week. In the post First Working Canal in Pennsylvania was in York Haven I noted that Cliff Satterthwaite painted two large murals for the York Haven State Bank.

I visited the York Haven Borough Hall and got pictures of the murals in their new setting; they will be used in a future post. Cliff Satterthwaite guessed they were painted in 1980, he was close; they were signed 1974.

I got a quick tour of the building and became intrigued with a non-dated, framed blueprint; hanging in the York Haven Borough offices. Years ago, it was found as a chance discovery within the building. The blueprint notes “Floor Plans and Elevations of a Library, York Haven, Penna.” The illustration, at the beginning of this post, is the front elevation, facing the end of North Front Street; which becomes Main Street. A public library has existed at that spot in York Haven since 1920.

This photo shows the interior of the 95-year-old library. Today, volunteers operate the York Haven Community Library, with financial support and book donations coming from the public.

The blueprint was the work of noted Philadelphia architect Mantle Fielding. Several collections of Mr. Fielding are housed in Winterthur Museum and Library, in Winterthur, Delaware. The museum notes “Mantle Fielding was an architect and authority on colonial painting. Born in New York City, the son of Mantle and Anna M. Stone Fielding, he was educated at the Germantown (Pennsylvania) Academy. He graduated in 1883 and then studied architecture at the Massachusetts Institute of Technology. After working as a draftsman and architect in Philadelphia, he launched an independent firm around 1886 that continued in operation until 1938.”

The June 17, 1919, issued of The Gettysburg Times carried the announcement for the New Town Hall:

York Haven, Pa., June 17—The contract for the town hall to be erected by the York Haven Paper Company, at Pennsylvania Avenue and Main Street, has been let to J. W. Hartley, a York contractor. Mantle Fielding, of Philadelphia, is the architect. The structure will be erected at a cost approximating $50,000, it is said. A survey of the site was made Saturday. 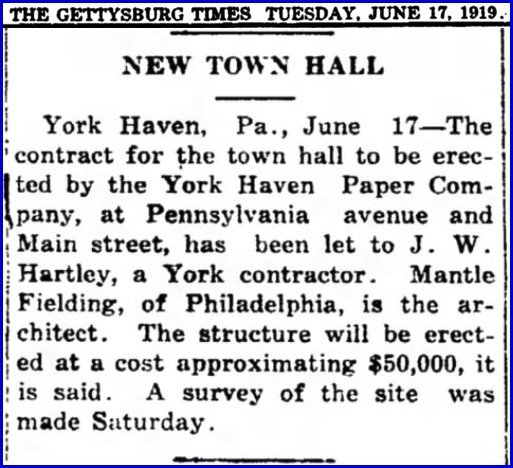 As the building took shape, the name Town Hall gave way to Community Hall. The Evening News of Harrisburg noted the dedication of the hall in their September 13, 1920 issue.

Saturday, September 11, 1920, was the official opening of “the York Haven Community Hall, which was built by the York Haven Paper Company and turned over to the Borough.”

The new hall was designed by Mantle Fielding, of Philadelphia. It is of brick and colonial architecture and cost more than $30,000. It has two stories and a basement. The interior is finished in natural wood. The Boy Scouts will use the basement; there is a library on the first floor, together with a committee room and a kitchen on the second, and the third story comprises an auditorium with seating capacity for 400. There is also a stage and a gallery.

The reported third story is actually the floor directly above the library, if one uses “It has two stories and a basement;” just as the kitchen and large community room exist today on the upper floor.

The first floor committee room serves as the Borough Hall. The entrance lobby, off of Pennsylvania Avenue, is where Cliff Satterthwaite’s murals now hang. The gallery loft above the second floor community room housed a projection room. At one time the community room was regularly set up to serve as a 400-seat movie theatre.

Continue reading for the full article about the York Haven Hall Dedication. 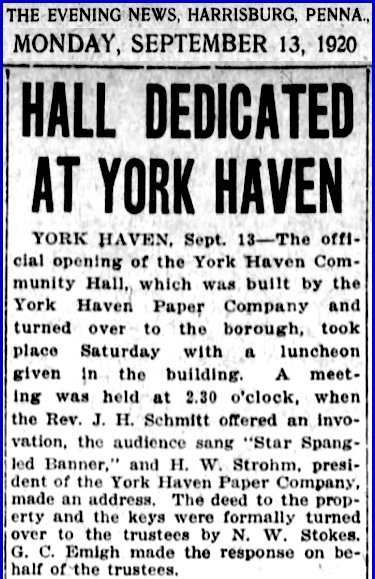 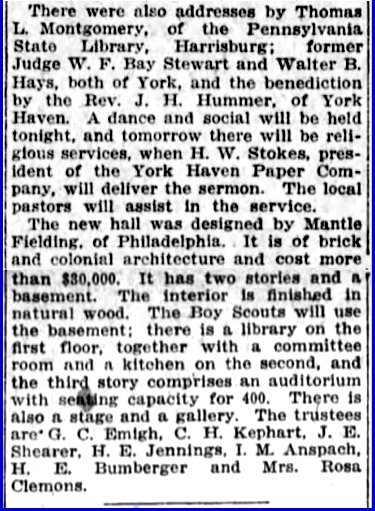