York Diner moves to the Suburbs 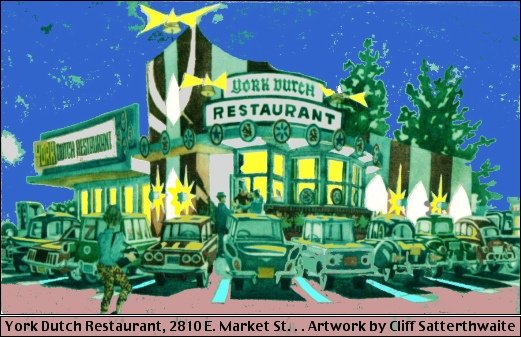 This artwork, by Cliff Satterthwaite, shows the York Dutch Restaurant at 2810 East Market Street. It was the third incarnation of Don Sternbergh’s York Diner in the suburbs, after he first established this as the place for “Such Good Food” in downtown York during 1939.

For ten years, the York Diner was located at 37-39 North George Street.  That address was one-half way between Philadelphia Street and Clark Avenue; therefore today the steps, front doors and lobby of the York County Judicial Center approximately occupy the same space where the diner sat.

Dr. Francis R. Wise purchased the lot upon which the diner sat in Downtown York. In 1949, Dr. Wise decided to convert the property into a parking lot; therefore Don Sternbergh had to find a new location for the York Diner. Don chose to move to the suburbs.

On March 30, 1949, the York Diner was split into three pieces and trucked out to the 2300 block of East Market Street in Springettsbury Township. Days later, the York Diner was back in business. This photo, by The Gazette and Daily, captured the section of the diner, previously facing North George Street, as it neared its new location. 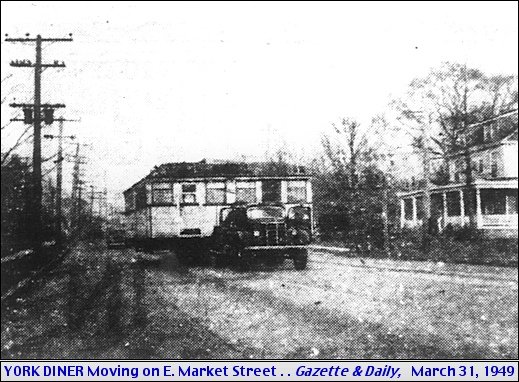 The caption of this photo in the March 31, 1949, issue of The Gazette and Daily stated:

FLITTING TIME FOR DINER—The York Diner is conveyed by truck to its new location along the Lincoln Highway, east, near the State Police Barracks. Picture was taken at 6:30 a.m. yesterday as the diner neared its new location. Old site at 37-39 North George Street, purchased by Dr. F. R. Wise, will be converted into a parking lot.

The York County Archives contains an early aerial photo showing the placement of the York Diner at 2333 East Market Street. From Directories available at the York County Heritage Trust, I’ve added the East Market Street numbers corresponding to the other buildings that stood at the time of the October 9, 1955, aerial photo. Note back then, Memory Lane did not align with Haines Road. 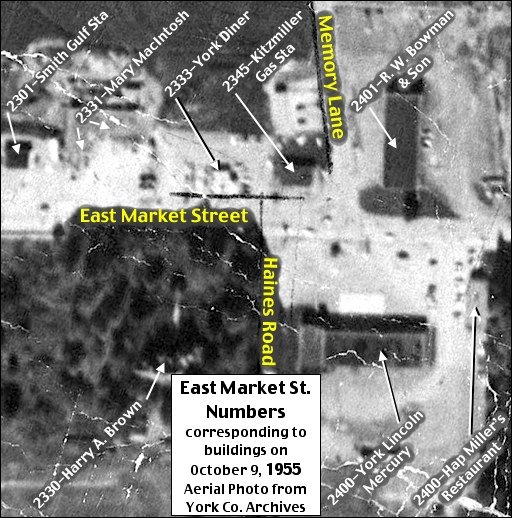 The Sunday News of April 8, 1984, ran a photo of The York Diner at their first location in the suburbs; at 2333 East Market Street. The photo appeared in their column The York That Was. 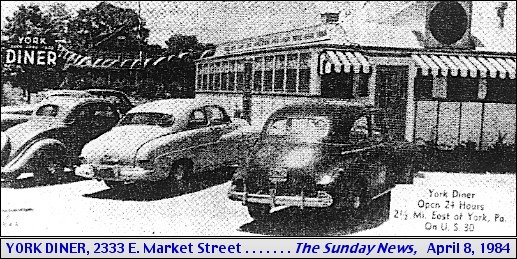 Today, the Giant Gas Station on the corner of Market Street and Memory Lane occupies the 2333 East Market Street site of the York Diner. The diner was physically moved again in 1960 due to the realignment of Memory Lane, so that it crossed Market Street directly opposite Haines Road. That York Diner move occurred because of the loss of much of the diner parking lot as the new Memory Lane cut through Don Sternbergh’s property. In future posts I’ll look at the next two locations of the York Diner along the Lincoln Highway in Springettsbury Township.