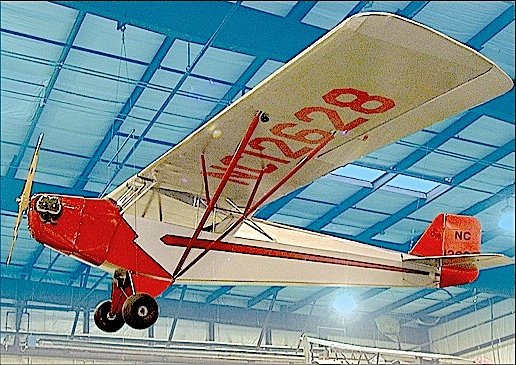 The E2 Taylor Cub Airplane originally owned by G. G. Naugle was restored and exhibited in the Virginia Aviation Museum at the Richmond International Airport. During the 1930s, this is the airplane that many in York County received their first airplane ride experience, as part of a Stony Brook service station promotion.

Curtis Ilgenfritz submitted the photo and a little history why this airplane is in a museum. In 1931, C. Gilbert Taylor and William T. Piper introduced the E2 Taylor Cub; a two-seat light aircraft; manufactured by Taylor Aircraft Company in Bradford, PA.

G. G. Naugle’s E2 Taylor Cub, Registration: NC12628, Construction No. 33, and built in 1932, is rare and museum worthy because it is one of the earliest survivors of a design that evolved into the famous Piper Cub. However it is no longer possible to visit this aircraft.

My post The Highway Bridge Service Station on the Lincoln Highway, produced a large response by readers. Thanks for your questions; and for sharing your stories and photos!

Requests were made for a photo of my G. G. Naugle’s 1936 Christmas Calendar; which was e-mailed to those readers who had close relations on the list of 203 individuals; provided in my previous post.

G. G. Naugle and his E2 Taylor Cub airplane are surrounded by 203 names, where he notes: “This remembrance is dedicated to our many friends and especially those listed herewith for their confidence and privilege in having personally given them their first airplane ride experience.”

Springettsbury Township’s inaugural History Night, featuring a presentation on Early Aviation in Springettsbury, will be postponed until October 14 2020, from the originally scheduled July 8, to help reduce the spread of COVID-19. History Night will be held in the Township Board Room, at 1501 Mt. Zion Road, York, PA from 7:00 p.m. – 8:30 p.m.