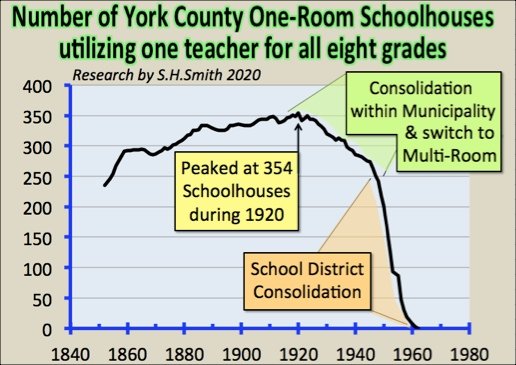 The schoolhouses of Strinestown explain one aspect of the onset of the 1920s decline in the number of York County one-room schoolhouses; which peaked at 354 during 1920.

A nice collection of early common school records and articles is housed in Penn State’s Pattee Library; where I spent several days researching last fall. Those finding were used in my second-generation One-Room Schools talk, which premiered earlier this year.

The Annual Reports of The Superintendent of Common Schools of Pennsylvania provide statistical details gathered from each county in the state. When combined with information in articles and dissertations, the resulting data allows graphing the number of York County One-Room Schoolhouses, utilizing one teacher for all eight grades; from the 1850s until 1960s.

In 1834 the Commonwealth of Pennsylvania passed a law providing the groundwork for our common school system. However it was optional for each municipality to enact local school taxes, in order to gain a State appropriation. The combined funds provided “free” public education for all children in their municipality.

Detail was lacking in the earliest annual reports, however that changed with the Twentieth Annual Report of The Superintendent of Common Schools of Pennsylvania. That report, for the school year ending June 1, 1853, noted: 34 School Districts in York County had adopted Common Schools, utilizing 247 Public Schoolhouses; of which 234 of them were one-room schoolhouses.

Public Schoolhouses are those built and maintained by the school authority. In 1853, public school districts were still renting some facilities to house classes. Renting vacant or church buildings was prevalent during the start-up decades for many school districts. However by the 1880s, almost every school district had determined it was more economical to construct and maintain their school buildings. In York County, one-room schoolhouses of brick construction were in the majority.

This stone Strinestown schoolhouse in Conewago Township, was built in 1865. It was last used as a schoolhouse during the 1927/1928 school year. This present photo shows it repurposed as a residence, at the north end of Strinestown, along Cemetery Road.

As with many of the earlier two-room schoolhouses, this “modern-looking” building continued to utilize outhouses, just as was done with one-room schoolhouses. At least for the early year, this building had no indoor plumbing, no running water and no electricity. All the big windows were for the sun to light up the rooms, however oil lamps were occasionally used.

The Strinestown Two-Room Schoolhouse stood south of Strinestown along the west side of the Susquehanna Trail. It was designed by Will H. Swartz, Architect, 515 Prospect Street, York, PA; and built by Drawbaugh Builders of Dover. The building no longer stands.

School district consolidation, from the late 1940s and through the 1950s, rapidly put the last 250 one-room schoolhouses out of existence for schooling purposes; although many still stand, repurposed as residences or businesses. The last York County one-room schoolhouse closed in 1961, within Carroll Township, in the northern part of the county.

My second-generation Stories of One-Room Schools talk was presented in January and February; however the talks scheduled in April and onwards have been on a rolling reschedule to the Fall or next Spring; in response to COVID-19. I’ll let everyone know, in future posts, when the talks will recommence.