Last month June Lloyd wrote a post on her Universal York blog about these Keystone shaped signs marking entrances to many Pennsylvania towns.  Jim McClure noted on his blog, York Town Square, Look at the size of that Keystone Marker; in commenting on York city’s work on restoring a Keystone Marker.

The article in Pennsylvania Magazine about Keystone Markers noted; “What once numbered in the tens of thousands has dwindled to about 600 throughout the state,” and “the keystone marker program was a way of strengthening community identity.”  The article includes a contest in which the magazine presented nine mystery keystone markers from around the state.  To make them a mystery, the town names were removed from photographs of the signs.  The readers have until April 25 to enter the contest to guess the names of the nine mystery towns.

I thought, what a neat idea; why not include a York County Keystone Mystery Marker every now and then in YorksPast.  The posts in this series will start with a new mystery marker, i.e. the one shown at the beginning of this post.

Any readers who know the name of this mystery town or village, post a comment.  Otherwise, I’ll reveal the answer in my next post about York County Keystone Mystery Markers.  Continue reading as I reveal details about AIRVILLE; the mystery marker from the previous post in the series. 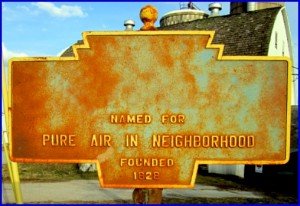 John Gibson’s 1886 History of York County has this to say about Airville on page 745:

Airville, formerly called McSherrysville, is a pleasantly located village in Lower Chanceford, twenty two miles from York.  Joseph McSherry came to the vicinity in 1796, at the age of four years, and grew to manhood with a Frenchman who was a nailmaker, and lived near the site of the United Brethren parsonage.  He married when nineteen, and started a blacksmith shop, near the site of Joseph Pearce’s store.  He kept tavern for thirty-five years.

The second house of the town was built by Aquila Montgomery, a colored man.  Of this race there are now quite a number in the vicinity.  Jackson McSherry built the next house, and afterward moved to Warrensburg, Mo.  Frederick McSherry built a store house in 1846, on the site of Mr. Pearce’s property, where he conducted the mercantile business until 1872, when he moved to his presen stand.  John Manifold conducted a store at an early period, and Robert McCollins opened one a short distance up the York road.

The first post office of the vicinity was called Lower Chanceford.  William Cowan, now ninety-five years old, was postmaster in 1828 and for several years later.  The office was then a mile from the site of the present town.

The United States Postal Service notes that the Airville post office was established January 3, 1825.  Did people recall that William Cowan was the first postmaster in 1828, and that is why the 1828 date was placed on the Airville Keystone Marker?  More than likely, there was an earlier postmaster in 1825.

This Keystone Marker is at the southwest entrance into Airville.  It is located along Woodbine Road (Rt. 425), just prior to where Fire Company Road veers off to the left.