September 10th 2013 marks the 200th Anniversary of Battle on Lake Erie.  This print is from the collections of the York County Heritage Trust.  On the back of the print is the wording “Hauling the Power from Wilmington For the Battle of Lake Erie 1813; Conestoga Wagon passing through York Co.”

J. Horace Rudy was one of the premier stained glass artisans in the country.  John Horace Rudy [1870-1940] is the son of a Norristown, PA carriage painter.  Rudy trained in Philadelphia, but established his reputation in Pittsburgh under the aegis of H. J. Heinz.  He worked mainly in opalescent glass.

J. Horace Rudy married Marian Emig from Emigsville, York County, PA in 1900 and relocated to York in 1906.  The Rudy Studio was located at 601 North Hartley Street in York.  J. Horace and Marian Rudy are buried in Prospect Hill Cemetery in York, PA.  The Rudy Art Glass Studio in York, PA, is a successor to the business founded by J. Horace Rudy in 1892 as a lead glass window fabricator.

J. Horace Rudy likely put this print together prior to 1913, from several photographs, for a stained glass window he was commissioned to create for the 100th Anniversary of Battle of Lake Erie.  Does anyone know where such a stained glass window might be located?  I’m thinking somewhere around Lake Erie, a DuPont building in Delaware or possibly the Naval Academy in Annapolis, Maryland.

The War of 1812 officially lasted from the Declaration of War against England on June 19, 1812 to the Treaty of Ghent on December 24, 1814.  I say officially, because the Battle of New Orleans was fought January 8, 1815; the United States and British Armies in New Orleans having not yet received word about the Treaty ending the War.

It was the Napoleonic wars in Europe that precipitated the War between the United States and England.  The British blockaded France and warned they would seize any United States vessel trading with Europe.  The British Navy got so bold, that they were capturing American ships long before they got close to the Europe mainland; some vessels were still within sight of the United States coastline.  Eventually British ships even captured American vessels headed to England; primarily to capture the American crews to force them to serve on British ships.

By 1812 almost 400 United States ships had been captured and their crews impressed to serve on British ships.  After the Declaration of War, President James Madison decided to invade Canada, the British Colonies to the north.  The ground battles did not go as swiftly as the Americans had expected.  It was a naval battle on the Great Lakes in 1813 that had the greatest bearing on the outcome of the war.

The experienced British Great Lakes Fleet was under Commander Robert H. Barclay; it consisted of 6 ships with a total of 63 long-range cannons.  Oliver H. Perry commanded a recently built flotilla of 9 smaller vessels for the United States; they were armed with a total of 54 shorter-range carronades.  On September 10, 1813, these fifteen wooden war ships engaged in a fierce battle on Lake Erie.  Against all odds, Commander Perry’s men achieved complete victory.  It was the first time in history that an entire British fleet had been defeated, with all British Ships either destroyed or captured virtually intact.

Commander Perry reported his victory with the simple statement, “We have met the enemy, and they are ours.”  Washington Irving almost immediately published a biography of Oliver Perry, who became a national hero.  Author Irving penned the line, “The last roar of cannon that died along the shores of Lake Erie was the expiring note of British domination.” 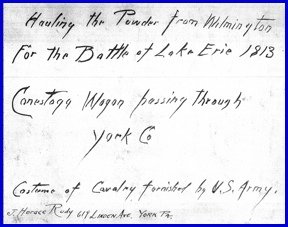 Getting back to the J. Horace Rudy print with the wording on the back “Hauling the Power from Wilmington For the Battle of Lake Erie 1813; Conestoga Wagon passing through York Co.”  The DuPont Powder Mills on the Brandywine River in Wilmington Delaware supplied this black powder.  It was hauled in a number of Conestoga powder-wagons along the Great Philadelphia Wagon Road until the wagons eventually had to turn north in the mountains and laboriously travel through wilderness to get to Lake Erie.  One of these Conestoga powder-wagons, that supposedly made this trip, is still maintained as an artifact in DuPont’s Collections.

These Conestoga powder-wagons would have passed by Ye Olde Valley Inn since it goes back to the 1730s.  Ye Olde Valley Inn was located along the Lincoln Highway (East Market Street in Springettsbury Township) approximately where the York Mall sign is presently located.  It was dismantled in 1962 to widen this main thoroughfare from two-lanes to four-lanes.  The good news is that it was dismantled very carefully and removed to Susquehanna Gardens in York County, where it has been restored.