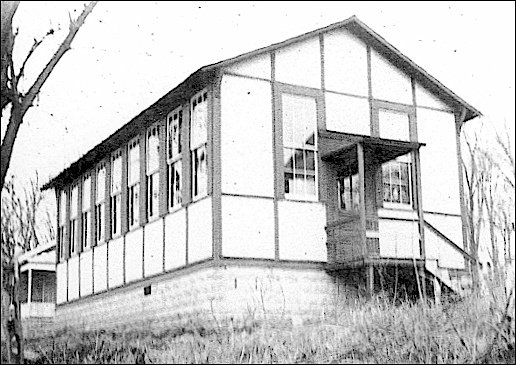 Asbestos buildings were utilized throughout York County beginning in the 1920s as temporary and permanent schoolhouses. The bolt-together, fire-proof, sections of these buildings were produced in Ambler, Pennsylvania; a borough in Montgomery County; near Philadelphia. Ambler was known as the asbestos capital of the world; which is not a good thing, since Ambler residents are diagnosed with mesothelioma three times more often than in other Pennsylvania residents.

The 1941 photo, from the Scott Knaub collection at the York County History Center, shows the asbestos building, utilized for Weiglestown Primary school; i.e. grades 1 through 4. That building was assembled in front of the 8-grade Weiglestown One-Room Schoolhouse during 1932, likely due to escalating enrollment. Thereafter, the original building became Weiglestown Grammar; for grades 5 through 8. These schoolhouses were located along Carlisle Road in the southeast part of Weiglestown.

For School Boards, the big selling points of asbestos schoolhouses was their lower cost, compared to traditional construction and ease of selling the bolt-together building, if it was no longer needed. However when these expenditures came up at School Board meetings, they were also careful to point out the safety aspects; i.e. the fire-proof nature of asbestos buildings, which was always highlighted in ads by Asbestos Buildings Company.

Per State reports, there are at lease another nine York County municipalities, yet to be determined, that utilized asbestos schoolhouses. If any of my readers remember this type of schoolhouse, I would like to hear from you.