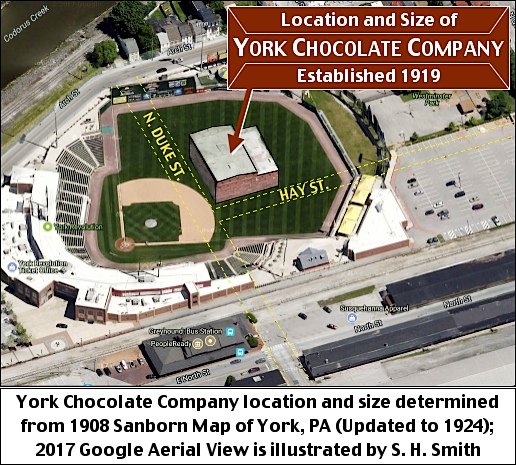 Nearly a century ago milk chocolate was produced in York at a location now replaced by centerfield of PeoplesBank Park; the home of the Atlantic League’s 2017 championship baseball team, the York Revolution. Large cans of milk, bags of cocca beans and sacks of sugar were carted a short distance from the neighboring rail yard to the factory of the York Chocolate Company.

Last week I gave a talk on early industries of York to a nice gathering of residents in Country Meadows at Leader Heights. The final business in my talk was the American Caramel Company, headquartered in York, and the factory with the fifth largest number of employees in York County during 1899. In 1900, that company acquired the Lancaster Caramel Company, owned by Milton Hershey, for $1 Million. With that money, Hershey decided to acquire land in Dauphin County and build a plant to mass-produce milk chocolate. Indirectly a significant amount of York money went into building the Hershey chocolate factory.

Following my talk, paraphrasing what a resident told me: “My father’s first job was hauling sacks of sugar and bags cocca beans, using a wheelbarrow, from the railroad station to a chocolate factory. When I tell others of this memory, nobody has ever remembered a chocolate factory in York. My Dad always told me how wonderful their Swiss milk chocolate tasted. Do you know anything about a chocolate factory? I believe there was some sort of Hershey connection with that factory also.”

I had never heard about a factory producing chocolate in York and added that to my large file of things requiring future research. On Thursday at the York County History Center, I was using Sanborn Fire Insurance Maps for other research, when I decided to do a quick skim of map pages near the railroad station. I did not have to look far, a mostly 4-story brick building, labeled York Chocolate Company stood out.

The York Chocolate Company factory was located on the northeast corner of North Duke and Hay Streets in York. I extended those streets on a 2017 Google Aerial View and illustrated on that view, an appropriately located and sized factory. Click on this LINK for a yorkblog.com Full View of the original illustration in this post if details are cut off in the cropping of illustration, or if it has been removed from the ydr.com site.