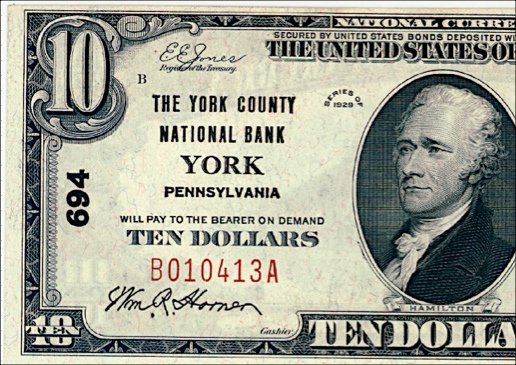 S. Forry Laucks, the President of the York Safe & Lock Company, had already been on the Board of Directors of the York County National Bank for 34-years, when he was elected the seventh President of the institution in 1930. As such, his signature began appearing on all currency bills issued by the bank.

Immediately after S. Martin Knaub saw the recent post concerning Lauxmont Farms, he e-mailed a photo of a 10-dollar bill signed by S. Forry Laucks. Mr. Knaub wrote: “Ever since I started going by my middle name, my parents have given me birthday presents related to various successful men who also went by their middle name. I think they hope some form of their achievements would rub off. Maybe there is a story to be told about my $10 bill.”

“As part of the financing measures aimed at paying the costs of the Civil War, Congress instituted legislation that reformed the nation’s banking system. Consequently, banks were required to purchase and place U.S. government securities on deposit with the government in order to be chartered as National Banks by the Comptroller of the Currency. Additionally, the National Banks could then issue new, standardized notes that would be accepted and recognized by National Banks across the country.”

“National Bank Notes were first authorized by the National Bank Act of February 25,
1863, and were issued between 1863 and 1935. Their design was the same regardless of place of issue, differing only in the name, location, and charter number of the bank. A National Bank Note was good at any National Bank or the Treasury. Therefore, anyone holding or taking such a note in payment could be sure of getting his or her money’s worth.”

The submitted York County National Bank note is part of the “Series of 1929,” which was the last series of National Bank Notes. They were issued until May of 1935, in $5, $10, $20, $50, and $100 denominations. Private companies printed the details concerning each local bank, with the Federal Bureau of Engraving and Printing doing the final printing and processing. The “Series of 1929” notes are the same size as todays paper currency and remain legal tender.

On January 9, 1865, the York County National Bank was authorized to commence the business of Banking under the National Bank Act of February 25, 1863. The bank had originally been established as the York Savings Institution in 1845.

The initial President of the York County National Bank was Philip A. Small and the first home of the bank was on the north side of East Market Street; near the Square, within the P. A. & S. Small Building. The bank occupied that site until 1889 when the bank purchased the goodwill of the Weiser Son & Carl, Private Bankers and moved into their building at what is now 12 East Market Street; which is on the south side of Market Street, i.e. where Wells Fargo Bank is now located.

The exterior of the new bank building featured Indiana limestone. The interior was described as strongly reminiscent of the Romanesque architecture of Italy, and featured Italian marble and an American marble from Tennessee.

The main bank vault appears to be a showcase for the York Safe & Lock Company. It was described as containing: “every new feature and improvement, known to its builders, which would add to its fire-proof qualities and resistance to burglarious or mob attack.”

“The entrance to the vault is a huge circular door, approximately 30 inches thick overall. The assembled weight of this door with its jambs and vestibule is 90,000 pounds.” “No paint is anywhere used throughout the vault, the entire finish being of steel polished to its natural grain.”

Possibly the York Safe & Lock Company installed the following type of vault in the new 1929 York County National Bank building. Pointed out is the key component of Dial Viewer Vaults. If anyone can confirm this vault type is, or was, used please comment.

Ed Costanza has been compiling an inventory of Dial Viewer Vaults. He notes York Safe & Lock Company built more of this vault type than any other vault door manufacturer.

Dial Viewer Vaults feature solid vault doors with no spindle hole(s). Instead, Dial Viewer boxes are mounted on vault door jambs and contain an eye piece for viewing illuminated combination dial(s), and combination knob(s) without graduations, etc. This system is designed to operate the combination locks, pressure systems and locking bolts within the vault door remotely.

The sixth president of the bank, Samuel Small, died in 1930. After which, S. Forry Laucks was unanimously elected the seventh President of the York County National Bank. He had been a director of the bank since 1896, which was five years after he became General Manager of York Safe & Lock Company, at the age of 21.

The York County National Bank was a constant in York County banking for nearly a century. Then in 1943, the bank branched out. After buying the Guardian Trust Company, and bringing them into their 12 East Market Street building; the bank name become York County National Bank and Trust Company. The former “Guardian Trust Co.” still appears in stone on their original, now repurposed, building at the southeast corner of East Market and South Duke Streets in York.

Since then, through various mergers, all the following banking businesses, located at 12 East Market Street have a lineage back to York County National Bank:

Wells Fargo Bank presently occupies the bank building at 12 East Market Street in York, PA, which was originally opened as the York County National Bank in 1929. National Central bank updated the facade in 1966, with a windowed entrance, which lightened up the interior.

2 comments on “York County National Bank had own currency”