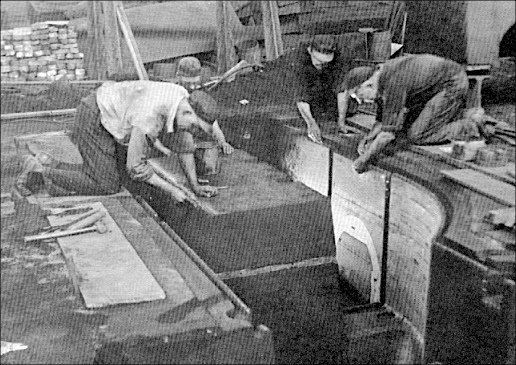 An item of York Corporation lore concerns the burial location of a large intricate casting at the Grantley Plant following WWII. Reasons for the burial range from it being less expensive than cutting up the bulky casting for scrap to a potentially secretive nature of the WWII era casting. In all my years working at the Grantley Plant, the story heard has variations, however the essence of the tale generally is as follows:

The casting was produced via a Pit Mold, i.e. assembled within the floor of the four-acre Foundry at the Grantley Plant. Pit Molding is much like that shown in the introductory photo. Highly skilled molders carefully assemble interlocking sand cores to provide the void into which molten iron is poured to produce the casting.

Word has it the buried casting turned out being used to prove out dimensional shrinkage of poured iron from the most intricate Pit Mold ever fabricated in Grantley’s four-acre Foundry. The casting became surplus scrap, after providing guidance on Pit Mold modifications for the production run of castings ordered by the government. The surplus casting was set aside outside and covered with a tarp; it next saw light of day again only after WWII ended.

The intended use of the casting is shrouded in mystery. Some claim, the secretive nature of the WWII era casting, as the reason it was quickly buried, when discovered under a tarp. The major variations to the tail involve: if the casting was actually buried; and if it was, where was it buried. The most often heard location is it was buried just west of the foundry, where a pond was located.

At a 2011 Grantley Plant Open House, I heard the following details for the first time: The large pond next to the foundry was drained shortly after the war and reduced to a smaller triangular shaped pond (recently available 1947 historic aerial photos tends to back up that statement). A contractor was hired to level the ground where most of the large pond was previously located; however before leveling the ground, they were instructed to dig a trench at the bottom of the large pond, into which the said casting was dragged and buried. Today that location is where the large machine shop (Building 29) sits. That building was constructed in 1965; supposedly the casting is buried deep, somewhere under that floor slab.

The following 1931 southwest looking aerial photo shows the Large Pond west of the Four Acre Foundry (Bldg. 9) at the Grantley Plant. Historic aerial photos from 1937 and 1938 show the same Large Pond. Building 8 was used for pattern storage. The wooden patterns were used to create the imprints in the sand molds, into which the molten iron was poured to create iron castings.

Today Buildings 8 and 9, along with several other attached buildings, are still utilized to produce YORK Chillers. After Commercial YORK Chiller production was moved from the site in 2010, Navy Systems production equipment was consolidated into Building 9. While Building 8, remained the Administration and Engineering offices for Navy Systems.

The Grantley Technology Center supplies specially designed chillers to almost every ship in the U.S. Navy and the majority of the naval vessels operated by the North Atlantic Treaty Organization (NATO). Chillers are considered “mission critical” on military ships because they keep sensitive equipment cool and functioning properly.

Buildings 8 and 9 opened as manufacturing entities of YORK Manufacturing Company in 1926. Now they serve as the location for specially designed YORK Chiller products for Naval applications.

When it opened in 1926, the York Manufacturing Company boasted, “The Four Acre Foundry, where YORK pours white hot metal into cold magic.” That boast evolved into the 1932 book “Cold Magic,” telling “the story of the progress of refrigeration, its value to commerce and industry, its relation to our everyday lives, and something of the part which YORK has been privileged to play in its development.”

These photos are from “Cold Magic.” The previous photo shows molten iron flowing from an immense electric furnace into a cupola for transport to molds. In 1932, the Four Acre Foundry had the capacity to pour 16 tons of iron per hour. During WWII, the foundry could produce 30 tons of castings per hour; many supplied as subcontractor to manufacturing companies locally and across the nation. The following photo shows molten iron being poured from cupola into a mold flask, internally consisting of molded sand.

In 1956, Borg-Warner Corporation purchased YORK Corporation for $50 million. In 1957 among the production moves out of The Yorks (Roosevelt Avenue Plant and Grantley Plant) were the foundry operations; which moved to an underutilized Borg-Warner foundry in Lawrenceburg, Indiana.

The following iron ashtrays were poured from the left-over iron in the Last Heat at York Division, Borg-Warner Foundry in Building 9, at Grantley Plant, on October 18, 1957.

The space vacated in the former foundry, Building 9, was utilized in moving YORK Chiller production from the Roosevelt Avenue Plant into the Grantley Plant, as Borg-Warner consolidated all York Division operations into Grantley during 1958.

History of YORK’s Grantley Plant, Part 2; Sequence of Seven Industrial Owners on this parcel prior to YORK (Johnson Controls)