Writing a family history book produces appreciative actions and notes of thanks for connecting distant, and sometimes no so distant, family members. The French gravesite of WWI Veteran Blaine B. Barshinger has received numerous floral decorations by even distant Barshinger relations; these are neat unexpected reactions to his story in my book “Barshingers in America.”

Corporal Blaine B. Barshinger served in Company B, 315th United States Infantry, of the famed 79th Division, during World War I. Blaine was wounded in combat on September 27th 1918 and died in France from pneumonia on October 15th 1918, at the age of 25. Blaine’s grave is located in Plot A, Row 25, Grave 19 of the St. Mihiel American Cemetery in Thiaucourt, France. This section of the cemetery is near the graves of 117 unknowns.

Blaine’s ancestors lived in York County since before the Revolutionary War; and it was his grandfather Charles Barshinger that moved a branch of the Barshinger Family to Perry County in 1859. The Blaine B. Barshinger VFW Post 882 in Marysville, Perry County, is named in honor of Blaine.

With the 100th Anniversary of the United States entry into World War I, I wondered if any of the 195 York County Veterans killed in WWI are buried in European WWI Cemeteries. If so, maybe this post will prompt those graves to receive floral decorations, as Blaine Barshinger has been receiving.

St. Mihiel American Cemetery is one of 8 A.B.M.C. (American Battle Monuments Commission) WWI cemeteries in Europe. The A.B.M.C. web site is (http://www.abmc.gov) and this link will take you directly to their web page with instructions for placing floral decorations.

The outbreak of World War I in Europe began in August of 1914 and for several years President Wilson struggled with keeping the United States out of the war. However German actions against United States shipping finally reached the tipping point, such that Wilson asked Congress for a declaration of war against Germany on April 2, 1917.

Congress approved the declaration of war on April 6th but not without several detractors; 6 Senators and 50 Representatives voting against U.S. involvement. On May 18th, Congress authorized conscription with a Selective Service Act. On May 29th, General John J. Pershing and a small staff sailed for France, the first of almost two million Americans who would be deployed in the American Expeditionary Force.

Blaine B. Barshinger was a soldier in the 79th Infantry Division of the United States Army. This unit was primarily made up of men from South Central and South Eastern Pennsylvania plus Maryland and Washington DC. This unit was activated in August of 1917 and trained in Maryland until being deployed to France in July of 1918. The unit was held in reserve during their initial weeks in France.

The 79th Division saw their initial action during the Meuse-Argonne Offensive, which was fought from September 26th until the Armistice of November 11, 1918. On the opening day of the Meuse-Argonne Offensive, the 79th Division was given the task of taking the German heavily fortified high ground at Montfaucon. This hilltop, 120-miles east of Paris, overlooked fields fronting the Argonne Forest; it had been a strategically important German observation post since the earliest days of the war.

On September 26th, it soon became clear the support of the 79th Division’s assault, was ill planned by headquarters. Nevertheless, the soldiers improvised and nearly met their objective by the end of the day; be it with many casualties. On September 27th, by Noon, against all odds, the 79th Division took Montfaucon, allowing the overall offensive to commence. It was during the second day of fighting at Montfaucon that Blaine Barshinger was wounded.

The core of the recently released, critically acclaimed book “With Their Bare Hands” is a detailed examination of the 79th Division and the battle for Montfaucon. Gene Fax spent 17-years researching the book; here is its cover, I just ordered a copy on Amazon. 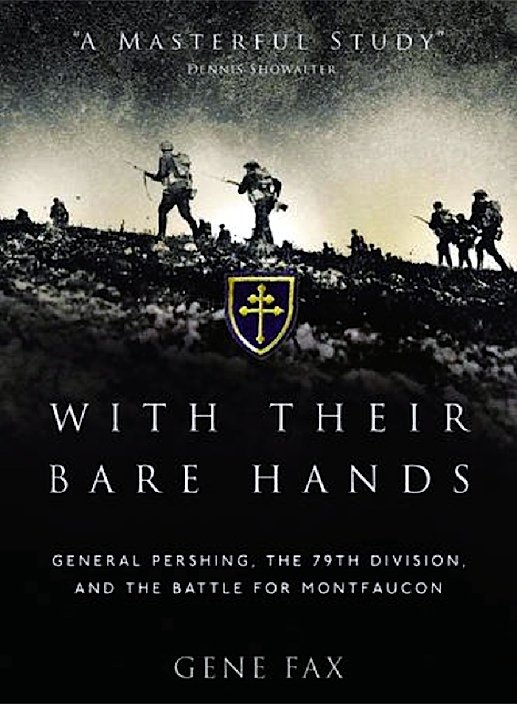 In 2002, a year after my book “Barshingers in America” was published, I discovered my “WWI Expert” was incorrect in stating that Blaine Barshinger was involved in the Battle of the St. Mihiel Salient, which occurred between September 12th and 15th of 1918. I’m anxious to read Gene Fax’s book to learn where the 79th Division was located in the weeks leading up their most famous battle.

The 79th Division was placed in reserve for several days following the taking of Montfaucon, however was back on the front lines outside Wadonville by October 8th. Wadonville is 25 miles southeast of Montfaucon. Overall, the Meuse-Argonne Offensive involved 1.2 million American soldiers and resulted in the loss of 26,277 American lives.

Most of the Americans buried in the WWI St. Mihiel American Cemetery were killed in either the Battle of the St. Mihiel Salient or in the St. Mihiel Region of the Meuse-Argonne Offensive. The map segments, in the following illustration, come from articles on the American Battle Monuments Commission web site. The top map indicates the various American Divisions located in the St. Mihiel Region during the Meuse-Argonne Offensive. I’ve pointed out the 79th Division and the lower map provides the location detail of the WWI St. Mihiel American Cemetery with respect to the town of Thiaucourt. Also note the 28th Division, made up of mostly Pennsylvania soldiers, is near Haumont; five miles to the east of the 79th Division location. 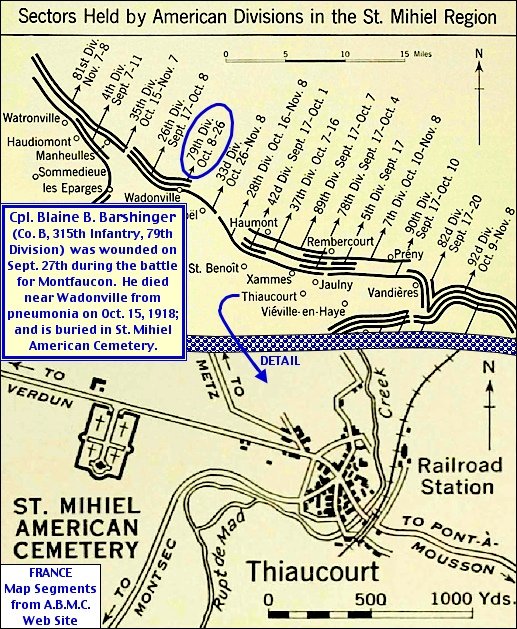 As I’ve noted in this illustration, Cpl. Blaine B. Barshinger (Co. B, 315th Infantry, 79th Division) was wounded on Sept. 27th during the battle for Montfaucon. He died near Wadonville on Oct. 15, 1918; and is buried in St. Mihiel American Cemetery.