U.S. WWI declaration to Lafayette, we are here!

The United States entered World War I on April 6, 1917, when Congress approved the declaration of war that President Wilson requested four days earlier. It was still many months before a sizeable American force was stationed in Europe. It was June when the first contingent of 200 United States soldiers boarded a ship, which arrived at St. Nazaire, France on the 26th. By that time France and its allies had been at war, with invading Germany, for nearly three years. French morale was low.

As a moral boost to the locals, the French government asked those initial United States soldiers to march through Paris on July 4, 1917. At the time, the front lines of the German armies were a mere fifty miles away. At the conclusion of the march, the commander of the American Expeditionary Force, General John J. Pershing, and his staff visited the grave of the Marquis de Lafayette at Picpus Cemetery, just outside Paris.

To a sizeable French crowd, it was the words of Pershing’s aide Colonel Charles E. Stanton, who was fluent in French, which produced a stirring response. Stanton ended his address with, “It is with loving pride we drape the colors in tribute of respect to this citizen of your great republic. And here and now in the presence of the illustrious dead we pledge our hearts and our honor in carrying this war to a successful issue.” Then he turned towards the grave, raised his arm and dramatically exclaimed, “Lafayette, we are here!”

This is one of several photos from that visit to Picpus Cemetery on July 4, 1917; it is from the Library of Congress. Closest to Lafayette’s grave is General John J. Pershing, with his hand on his hip. Colonel Charles E. Stanton is third from the left. Stanton’s remarks were originally attributed to Pershing because the press was under a strict censor policy not to print the name and location of any U.S. soldier in Europe, with the only exception, General Pershing.

American memories of Lafayette’s profound impact on the United States achieving its independence from the British resulted in an immediate small, but growing, outpouring of support for the French during World War I. That group invoked Lafayette’s name in establishing the Lafayette Fund, which started supplying comfort kits to French soldiers within months after war broke out in 1914.

A group of American pilots volunteered their talents well before the United States entered the war. That squadron of pilots took the name Lafayette Escadrille as they flew missions for France.

The July 4, 1917 visit to the grave of Lafayette by American soldiers resulted in everything from related posters in France to “Lafayette, We Are Here” songs in America. I’ll post the words and music to one of those songs closer to July 4th. For now, here is a 1917 French WWI poster by Eugene Courboin, with Uncle Sam shaking hands with a Lafayette monument. 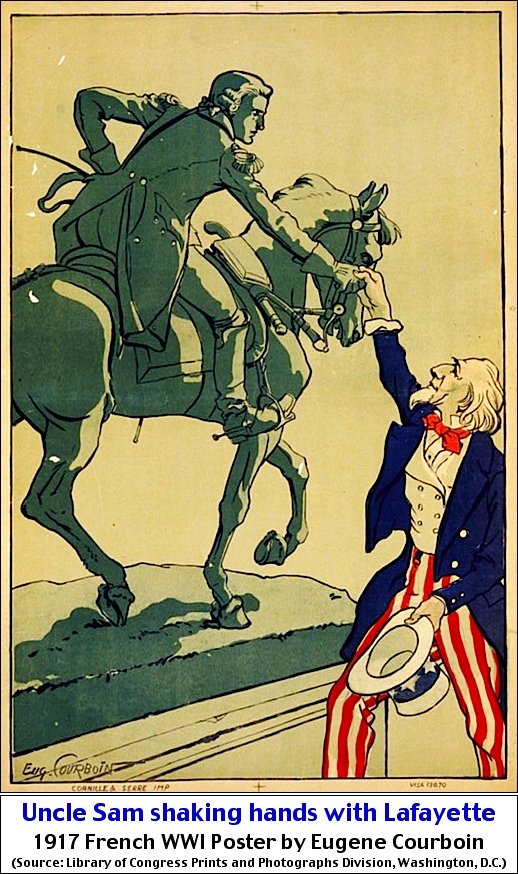