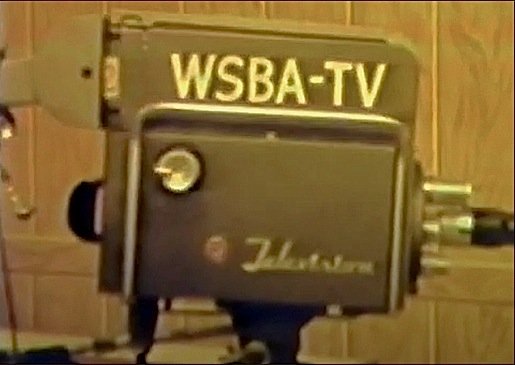 The frantic activity at the top of South Queen Street hill in 1952 centered on a race to get WSBA-TV on the air as the nation’s first commercially equipped UHF station (i.e. Channels 14 to 83). At the time, minimal TV reception was available in the York area. WGAL-TV, a VHF station (i.e. Channels 2 to 13), had been operating from Lancaster since March 1949; however on low power, and hence not viewable in many sections of York County. Likewise, three Baltimore VHF channels sent minimal signals; reaching only a small portion of southern York County.

Brenda Reisinger submitted the photo of an early WSBA-TV studio camera with questions: “The TV camera is in the room where Ed Lincoln hosted a weekly live dance show, Club 43; are there any Club 43 photos of teens dancing? Was WSBA really the first UHF station?” Newspapers.com research was used to answer Brenda’s questions. This post explores details on the race to become the nation’s first commercially equipped UHF station.

WSBA-TV was a new division of Susquehanna Broadcasting Company. The Radio Division of that company began in 1942, with WSBA-AM 910 as the flagship station. Quoting from page 26 of “Susquehanna Radio • The First Fifty Years” by Philip K. Eberly, 1992: “The feverish activity at 2005 South Queen Street centered not only on getting on the air quickly, but getting there as the nation’s first UHF station. Louis Appell, Jr., recalls that “everybody’s adrenalin started to flow” as engineers and others from the radio side put in long hours to ready the new station for broadcast. This was one of the young Susquehanna president’s first major projects since he took over the reins of leadership following his father’s death in 1951. He would attack the Company’s entry into TV with a balanced mix of conservative business orthodoxy and elements of daring that were to mark his entire career.”

By early December 1952, the WSBA-TV hilltop station and 380-foot tower at 2005 South Queen Street in Spring Garden Township was ready to accept UHF transmitter equipment. WSBA-TV was one of many start-up UHF stations that wanted to get the first commercial UHF transmitter, which RCA was originally scheduled to ship in early December. RCA decided not to favorite one station, and elected to manufacture four UHF transmitters, before any of them shipped.

The four start-up UHF stations presenting the most persuasive reasoning why they should be in the group of four, could take delivery of a transmitter at the RCA Victor factory in Camden, NJ; all at the same time. Louis Appell, Jr. swayed RCA for WSBA-TV, in York, PA, to be one of the four. The other three stations were: WFPG-TV in Atlantic City, NJ; WBRE-TV in Wilkes-Barre, PA; and WSBT-TV in South Bend, IN.

An Associated Press article appeared in Friday December 19, 1952 issues of newspapers across the country: “Ultra high frequency (UHF) television takes a giant stride today, with four stations receiving transmitters for sending programs on channels newly opened to video. They will race to get on the air as quickly as possible and the winner will be the nation’s second UHF station and the first with commercial equipment.”

The first recognized commercial UHF station was KPTV, Channel 27, in Portland, OR, which went on the air September 18, 1952. That station quickly started by re-purposing experimental equipment that RCA utilized in developing UHF broadcasting at its research station in Bridgeport, CT. Portland was not the only location that wanted that experimental UHF transmitter, however it prevailed by persuading RCA that it would be doing a public service in selling them the transmitter, since they were the largest un-served television market in the country. KPTV used the experimental transmitter until 1957, when the station merged with another broadcaster on VHF channel 12, where it has broadcast since.

The September-October, 1952, issue of Broadcast News, published by RCA Engineering Products Department in Camden, NJ, contains a 22-page technical article on the Portland UHF station. Subtitle of the article is: “KPTV – world’s first commercial UHF television station.” RCA developed UHF broadcast and receiving equipment in a two-and-a-half year effort at experimental TV station KC2XAK in Bridgeport, CT. Portland purchased the equipment after the Bridgeport station closed August 23, 1952, once RCA had enough data to finish commercial design of UHF transmitters and receivers; so that production could commence.

Since TV sets only had VHF (very high frequency) selectors (Channels 2 to 13), RCA, and other manufacturers, began producing add-on UHF selectors, to hook up to existing TV sets; usually turned to VHF Channel 5. The RCA Victor Model U-70 UHF Selector was a top of the line UHF receiver, containing four tubes. The 8 by 11 by 9-inch unit sold locally for $59.95 during December of 1952.

The Bridgeport station, which went on the air January 4, 1950, often did development testing by re-broadcasting NBC’s signal which was received via a microwave relay from the Empire State Building to the KC2XAK station. Because of that, the Bridgeport station is occasionally touted as the first UHF television station.

FINAL LEG OF THE RACE

On Friday, December 19, 1952, the final leg of the race to become the nation’s first commercially equipped UHF station begins at the shipping docks of the RCA Victor factory in Camden, NJ. At the cut of a ribbon, early Friday morning, four TV stations begin loading their trucks with their prized UHF transmitter equipment.

The relatively nearby WFPG-TV station in Atlantic City, NJ, boastfully predicted they would have their transmitter installed and test signals on the air within hours. However, technical difficulties, in making the many connections between the transmitter equipment and the previously installed station equipment, created start-up problems at all stations. It was the station that could troubleshoot the problems the fastest, that would claim the title of the nation’s first commercially equipped UHF station; which was judged as the first to broadcast a receivable test signal.

If one thought the WSBT-TV station in South Bend, Indiana had a disadvantage due to travel distance, think again. The station’s truck raced to a special chartered freight airplane. On-board were WSBT-TV engineers, doing preliminary checks during the flight to South Bend. The transmitter equipment arrived at the station well before Noon on Friday.

The Philadelphia Inquirer reported on the outcome of the race in their Monday December 22, 1952 issue, with headlines: “York UHF Station Beats Shore TV as 1st in U. S.” Quoting the initial sentences in the article: “A York, Pa. station yesterday won a race with three other outlets, including one at Atlantic City, to become the Nation’s first commercially equipped ultra high frequency television station to go on the air. Louis J. Appell, Jr., president of the York station, WSBA-TV, an affiliate of ABC, announced that it carried its first test pattern from 2:06 until 3:40 A. M. yesterday.” The article concluded: “Appell commented last night: ‘We thought it was a lost cause to get on the air before the Atlantic City station. We had some minor difficulties, but managed to overcome them early today’.”

At places on the Internet, occasionally South Bend’s WSBT-TV is listed as going on the air earlier than York’s WSBA-TV; something pointed out by Brenda Reisinger. I’ve discovered no newspapers reporting as such. In the Internet era, evidently someone incorrectly assumed WSBT-TV’s start-up being reported as Sunday Dec. 21, 1952, without a time, is earlier than 2:06 A.M., Sunday Dec. 21, 1952. It was the parent company of WSBT-TV, The South Bend Tribune, reporting in their issue of Monday December 22, 1952, page 1: “WSBT-TV, Channel 34, went on the air late Sunday night.”

WGAL-TV improved its coverage by boosting power almost simultaneously with WSBA-TV going on the air in 1952. Channel 8 had affiliation agreements with NBC and CBS. In June of 1954, WGAL-TV moved its transmitter to a hilltop in Hellam Township, York County; which enabled it to reach the entire coverage area of WSBA-TV.

Rapidly TV sets were produced with built-in UHF selectors. The following illustration shows the settings to receive WSBA UHF Channel 43 on a Zenith TV equipped with VHF and UHF selector knobs. Remember these, from the days before TV and Cable Box remote controls.

ABC was the prime affiliate of WSBA-TV, however during the earliest years, the station was, at times, also affiliated with the Dumont Network until 1954. The McCarthy hearings, carried exclusively by ABC-TV, helped build additional interest in Channel 43, as did ABC’s stepped-up sports coverage.

In 1963, WSBA-TV became a CBS affiliate. Channel 43 was now home for the CBS blockbusters of the seventies and eighties: “The Ed Sullivan Show,” “The Lucy Show,” “The Jackie Gleason Show,” “The Andy Griffith Show,” “All in the Family,” “Beverly Hillbillies,” “Have Gun, Will Travel,” “Gunsmoke,” “Dallas,” and “Mission Impossible.”

In 1983, Susquehanna Broadcasting decided to sell WSBA-TV. On March 11, 1983, the buyer was Mohawk Broadcasting, an Idaho corporation specializing in independent TV stations. On August 28, 1983, the last WSBA -TV station identification flashed on the Channel 43 screen. The next day, the call letters became WPMT (for Pennsylvania Movie Time). Then on October 6, 1986, WPMT-TV became one of the charter affiliates of the newly launched FOX network.

WSBA-TV/WPMT-TV is the oldest, still operating UHF TV station in the Nation, having operated on channel 43 since 2:06 A.M., Sunday Dec. 21, 1952. Although it hasn’t actually transmitted on channel 43 since analog broadcasting ended in 2009, (it now operates its digital signal as a channel-share on 36) nevertheless, since its Program and System Information Protocol (PSIP) remains channel 43, it is still considered to be “on” that channel.

What does the Mickey Mouse Club have to do with YorksPast ?
All in The Family connection to YORK Air Conditioning
Susquehanna Broadcasting Headquarters built on site of former Dempwolf building