Funeral of George A. Wood of York following WWI 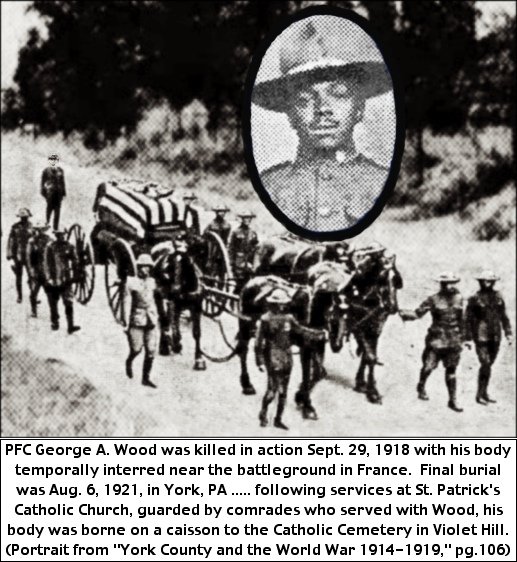 The funeral cortege of WWI veteran George Wood was escorted by fellow comrades as the caisson proceeded to the Catholic Cemetery in Violet Hill, just south of York, PA. This is part 2 of the post: African-American George A. Wood killed in WWI.

The portrait of George A. Wood is from page 106 of the book “York County and the World War 1914-1919” by Clifford J. Hall and John P. Lehn; a book which uses the incorrect surname spelling. “Woods” shows up every now and then, however “Wood” is the surname spelling used by family members of that time and in military records. On the June 5, 1917 draft registration card for George, he signs his name “George A. Wood.”

PFC George A. Wood died September 29, 1918; with his body temporally interred near the French battleground, where he was killed in action. By the Armistice of November 11, 1918, there were over 76,000 United States soldiers buried in temporary battlefield graves. No remains of fallen WWI soldiers were returned to America until well after the war ended.

During the weekend George A. Wood was laid to rest in Saint Mary’s and Saint Patrick’s Cemetery, the funerals take place over the remains of two other York County veterans, returned from France; Stewart Krider and William Myers.

The Monday August 8, 1921 issue of The Gazette and Daily reported on the Saturday August 6, 1921, funeral of George A. Wood. Quoting the entire article:

“Services over the body of Private George Wood, son of Mrs. Anna Adams, 434 Susquehanna Avenue, were held Saturday morning in St. Patrick’s Catholic Church. Borne on a caisson, provided by the local post of the American Legion, and guarded by comrades who served with Wood in the 368th field artillery, the flag draped and flower covered casket was taken from the undertaking establishment of W. J. Boll & Co., 252 South George Street, at 8:30 o’clock. The funeral cortege proceeded to St. Patrick’s Church, where a high mass of requiem was conducted at 9 o’clock by the assistant pastor, Rev. Richard N. McLaughlin. After the services the body was taken to St. Patrick’s Cemetery where interment was made.”