Witness Trees provide a living link to the past and gave witness to the surrounding events during their lifetime.  A huge majestic white oak was an impressive landmark in Emigsville until it fell in a 1997 storm.  A slice of this 300-year-old oak tree is now part of a display connecting people, history, and places.  This display is in the Agricultural and Industrial Museum of the York County Heritage Trust.  Jim McClure describes the display in a York Town Square post from 2007.

Witness Trees at Gettysburg are acknowledged as living sentinels that witnessed the Battle in July of 1863 or witnessed Lincoln’s Gettysburg Address during November of 1863.  Witness Trees at Valley Forge are acknowledged for witnessing the Continental Army encampment during the winter of 1777/1778.  Yesterday’s post asked, “Are there any Witness Trees that can be recognized for witnessing the 1781 through 1783 activities within Revolutionary War prisoner-of-war Camp Security?”

What about other possible Witness Trees in York County?  The photo at the beginning of this post shows the mammoth sycamore tree in front of the historic house located at 2901 Whiteford Road in Springettsbury Township.  In a post last summer, I called it The Mammoth Sycamore Witness Tree of Springettsbury Township.  One really does not appreciate how massive this tree is until you are standing on the sidewalk next to this sycamore.

Last year I measured a circumference of 18-feet on the tree trunk.  Earlier this month, James Meek, a Certified Arborist, indicated that the official measurement should be taken at the 4-1/2 foot height, resulting in a circumference of 17’-4”; which is still in the same size range as the Emigsville oak.

I thought, why not acknowledge such Witness Trees in York County?   Just as these trees are recognized around the country by civic groups, local & state governments and the National Park Service because they serve as silent sentinels of our heritage; connecting people, history, and places.

Witness Trees, as designated by the National Park Service, are long-standing trees that have “witnessed” key events, trends, and people in American history.  An example of a Witness Tree known to be there during a single significant historic event is the Honey Locust Witness Tree that stood about 150-feet away from the speakers’ platform when President Abraham Lincoln delivered the Gettysburg Address.  This Witness Tree received national media attention when the top of the tree was broken off during a storm in 2008, and although beaten and battered, it still hangs on. 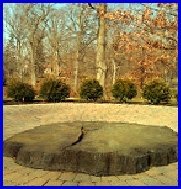 Donegal Presbyterian Church in Lancaster County is forever tied to a historic church event.  At a church service during the American Revolution, the congregation, joined by their pastor, went out and encircled a white oak planted just outside the church and pledged their allegiance as patriots of the new country.  The white oak became known as the Witness Tree and the church became known as the Witness Tree Church.  Even after the Witness Tree died, the stump remains a source of pride within the community to this single event of patriotism during the founding of our country.

Local governments have protected community Witness Trees.  The Chicago Tribune reported in 1999, “A Witness Tree that has stood in rural Coral Township for nearly two centuries was designated a historic landmark by unanimous vote of the McHenry County board.  The designation will protect the tree from real estate development or other man-made harm for the rest of its natural life.” 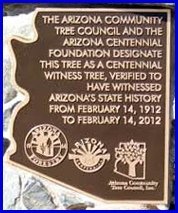 In 2000, the National Park Service created the Historic American Landscapes Survey (HALS) to document historic landscapes from gardens to battlefields.  In the summer of 2006, HALS initiated the Witness Tree Protection Program to identify and document historically and biologically significant trees.  The Witness Tree program began in the greater Washington, D.C. area and was slated to grow from there.

These are but a few of the many ways to acknowledge Witness Trees.  In each case, the end result is to connect people, history, and places.