Progress on the restoration of Witmer’s One-Room Schoolhouse continues along Stonewood Road in Springettsbury Township. Cliff Satterthwaite did a series of paintings of this one-room schoolhouse from 1971 through 1976; this particular painting was done in the spring of 1976, just as the leaves were coming out on the trees.

I had a newspaper clipping that included the wording “Witmer’s Shady Dell School,” however still have not discovered what newspaper it was from or the full date of the article; other than 1914 written on it. The surrounding text in the article gave no clue where this school was located.

The 1902 Christmas Program plus 1900 U. S. Census, combined with the article wording “Witmer’s Shady Dell School,” led me to the conclusion that early in its life, Witmer’s One-Room School was likely know as Witmer’s Shady Dell School. This post contains a few recently found articles, adding some support for that conclusion. The area where Witmer’s Schoolhouse is located can certainly be described as a shady dell.

I looked at that literary society notebook, since it was from same time frame as the mystery 1914 article. The notebook only uses the wording “Witmer’s School.” The teachers and scholars of Witmer’s School in Springettsbury Township organized the Stephen A. Douglas Literary Society on November 21, 1913.

An article in the November 21, 1914 issue of The York Daily noted, “A number of young people from this place [Stony Brook] attended the entertainment given by the Stephen A. Douglass Literary Society, at Shady Dell Schoolhouse, on Wednesday evening.”

Earlier the same year, an article in the February 25, 1914 issue of The York Daily noted:

Witmer, Feb. 24.—Washington did more for his country than Lincoln it was decided after a debate before the Stephen A. Dougless Literary Society, of the Witmer School, Springettsbury Township, last Friday. The affirmative speakers were: Beulah Throne, Chester Miller; the negative, William White, Edward White. The judges were Harvey Landes, John Ilgenfritz and Anna Strickler. 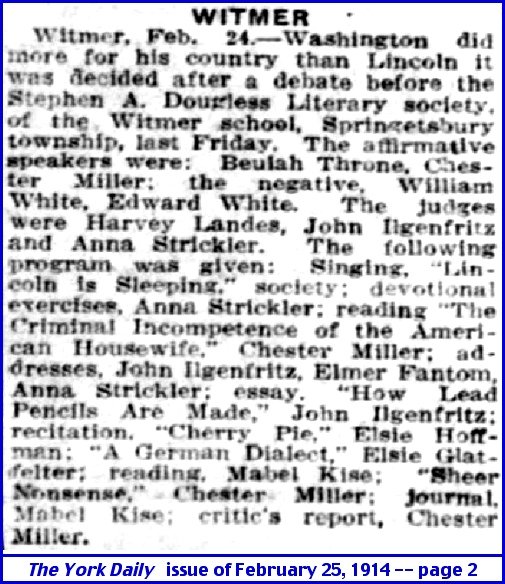 The February 25, 1914, article notes “Stephen A. Douglass Literary Society, at Shady Dell Schoolhouse” and the February 25, 1914 article notes “Stephen A. Dougless Literary Society, of the Witmer School.” While these articles are only more circumstantial evidence, I still heavily lean towards the conclusion that early in its life, Witmer’s One-Room School was likely know as Witmer’s Shady Dell School.

I’m still on the lookout for a definitive source tying together the Witmer’s and Shady Dell school names in Springettsbury Township. If any of my readers can help, please comment.