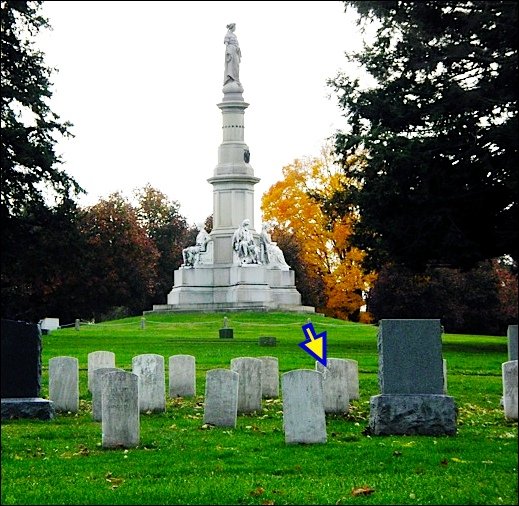 William H. Myers completes the series examining the three York County WWI Veterans who were recipients of the Distinguished Service Cross. Private Myers is one of the few WWI Veterans granted permission to be buried in Soldiers’ National Cemetery at Gettysburg.

William H. Myers is featured in “York County and the World War,” by Clifford Hall and John Lehn. The first paragraph of their article, on page 29, notes: Private Myers “was but sixteen years old when he entered the service. He was rejected at the recruiting station when he first applied for enlistment, because of his youth, but with that never-give-up spirit, which marked his whole army career, he kept trying until he was finally accepted, on his fifth attempt.”

William Hargraves Myers was born December 20, 1900, in York, Pennsylvania, to William and Emma Myers. This birth date is given in Emma’s 1934 sworn application for Veteran’s Compensation, as the widowed mother of Private William H. Myers. That claim was approved and Emma received $10 per month, with 20 months maximum.

William’s middle name, Hargraves , is the maiden name of his grandmother on his mother’s side; Mary (Hargraves) Timperlake. There are two discovered period records, where the middle initial of William H. Myers is incorrectly noted as “A.” These are: the article within “York County and the World War,” by Hall and Lehn, and a 1921 article within the Evening News, Harrisburg, PA.

In 1908, Emma Myers remarries Howard S. Sheely. The 1910 U.S. Census has Howard and Emma Sheely residing on West Poplar Street in West Manchester Township; also in the household is Howard’s stepson William H. Myers. This family is living at 1102-1/2 West King Street in York, at the time of William’s enlistment.

William Myers, from York, Pennsylvania, enlisted at Fort Logan, Colorado, on June 2, 1917. Those enlistments records show he claimed to be 18-years and 11-months old. However on William’s fifth, and finally successful, enlistment attempt, he added 2-1/2 years to his actual age of 16-years and 5-months. His mother also recalled an enlistment attempt in Kansas; which might have been his third or fourth unsuccessful attempt to enlist.

William H. Myers served his whole Army enlistment with the 10th Field Artillery. That artillery unit was organized at Fort Douglas, Arizona on June 1, 1917, and was assigned, on November of 1917, to the 3rd Infantry Division for the duration of WWI.

For heroic actions in the Battle of the Marne, the entire 10th Field Artillery was awarded the Presidential Unit Citation, with three members of the unit being awarded the Distinguished Service Cross. Private William H. Myers was killed in action during that battle, at Chateau-Thierry, France, on July 15, 1918.

William H. Myers is the only York County Veteran noted as receiving the Distinguished Service Cross in “York County and the World War,” by Hall and Lehn; thus he was likely the first of the three to receive that honor. Wilbur Suiter and Ervin Sheffer received their honors after Hall and Lehn finished research on those veterans or the book had already gone to print. For all three, the honors were presented posthumously to their parents.

The Evening News, Harrisburg, PA, reported in a March 18, 1921 article: “Private William A. (actually H.) Myers, a York boy, who died in France in the World War, will rest in the National Cemetery at Gettysburg. Permission for the burial of the body there has been given at the request of the soldier’s mother, Mrs. Emma Sheely. The body is now on the way from France. It will be interred with fitting military ceremonies. Private Myers was but 16 years old when he enlisted. He was killed in action July 15, 1918, at Chateau-Thierry. For extraordinary valor under fire the Distinguished Service Cross was awarded him and presented to his mother.”

The Gazette and Daily, York, PA, reported on Myers funeral in an August 8, 1921 article: “Funeral services over the body of Private William H. Myers were held Saturday afternoon (Aug. 6th) at 2 o’clock at St. Matthew’s Church, with Rev. M. R. Hamsher officiating. The dead hero’s body was taken to Gettysburg, where it was buried in the National Cemetery.”

The following view looks south towards Soldiers’ National Monument in Gettysburg National Cemetery; from behind “Section 8” graves. That section, of 102-graves, contains four rows; consisting of a few veterans from the Spanish American War and World War I; although the majority are aged Civil War Veterans. An arrow points to the back of the grave stone of William H. Myers, of York, PA.