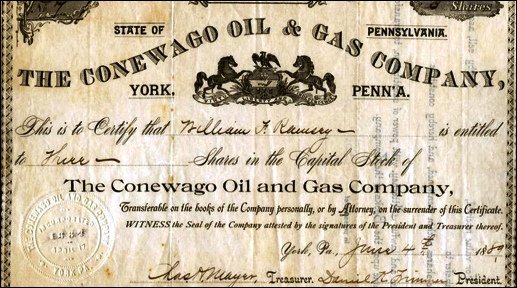 Wildcatting for oil fields in Manchester Township during 1889

The Conewago Oil and Gas Company was chartered in 1889 to wildcat for York County oil and gas fields. A wildcatter is an American term for those who drill wildcat wells, which are exploration oil wells drilled in areas not known to be oil fields.

The Conewago Oil and Gas Company was chartered April 17, 1889 to wildcat for oil and gas in York County. John Shue submitted a stock certificate from that company. A successful search of old newspapers revealed company activity was focused in Manchester Township.

THE CONEWAGO OIL AND GAS COMPANY

Edwin Drake struck oil near Titusville, Pennsylvania, in 1859. It was the first commercially successful oil well in the country and touched off an oil rush; then centered in Pennsylvania. This photo shows a typical early Pennsylvania oil field.

Over the next 40-years, many Pennsylvania counties experienced wildcatting efforts to discover the next big oil field. The most successful was the Bradford oil field; discovered in 1871. In 1881, the Bradford oil fields produced 83% of the United States entire oil output and 77% of all the oil produced in the world that year. Any hint of oil in the ground, usually touched off wildcatting efforts to become the next Bradford success; thus was the case in York County during 1889.

Four days later, “the company leased about fifteen hundred acres of land in Manchester Township in the vicinity of the Bull Road, and including the Pfaltzgraff property, where indications of oil have been plainly indicated on the surface for years.” On March 14, the company commenced boring for oil and gas on the Pfaltzgraff farm. On March 22, “a depth of four hundred feet has been penetrated without rock having been encountered.” “The drillers contend that the conditions encountered thus far are similar to those in the Bradford oil field.”

Ultimately this York County wildcatting venture turned out to be a bust. The Conewago Oil and Gas Company stock was worthless only months after it was issued. During follow-up drilling operations, there was the occasional two-line newspaper article on drilling progress, or lack thereof; however the most detailed article was discovered in The Sentinel of Carlisle, PA, on July 5, 1889:

“For the past five months drillers have been at work on the Pfaltzgraff farm, two miles northwest of York, prospecting and boring for oil and gas under contract with the Conewago Oil and Gas Company of York. They have reached a depth of 1900 feet, but the copious flood of water has caused a suspension of work. As it will entail a considerable outlay of money to overcome this hindrance the company is not disposed to prosecute operations any farther at present. They have not yet determined to abandon their search, as it is suggested that operations at another site close by would avoid a repetition of such difficulties.”

The 1876 Beach Nichols Atlas of York County shows a concentration of Pfaltzgraff properties in the vicinity just east of the present Cousler Park in Manchester Township. Maybe the borehole casing was discovered during development in the area; if not, hopefully the 1900-foot borehole was sealed adequately 130-years ago.

Click on this LINK for a yorkblog.com Full View of all the original photos in this post if details are cut off in the cropping of the photos, or if any photos or links have been removed from the ydr.com site.