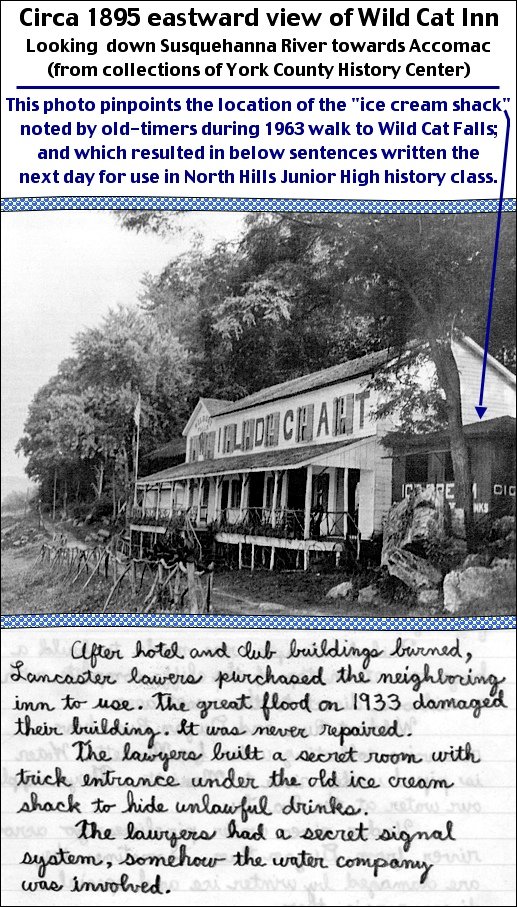 The Blackstonian Club of the Lancaster bar purchased the Wild Cat Inn, in Hellam Township, York County, on November 7th, 1924. They employed Lancaster architect Henry Y. Shaub to draw up alterations to the Wild Cat Inn for their use.

A note on those December 8th, 1924 architectural drawings, coupled with the circa 1895 eastward looking photo from the collections of the York County History Center, substantiate tales I heard in 1963; implying Lancaster lawyers utilized the former Wild Cat Inn as a prohibition speakeasy. Click on this LINK for a Full View of the illustration in this post if details are cut off in the cropping of illustration.

More than a century ago, Wild Cat Glen was known far and wide as the scenic wonder of York County. The narrow ravine, flanked with 150-foot high extremely steep rock faces, is located adjacent to the Susquehanna River; west of Accomac. Wild Cat Run, in draining some of the Hellam Hills, cascades down the rock faces as Wild Cat Falls.

On a 1963 walk from the Smith bungalow to Wild Cat Falls, a few much older guys joined us from other bungalows. They talked about the Glen Orchard Hotel and the Wild Cat Club buildings, which sat just east of Wild Cat Run and the Wild Cat Inn. The day after that walk I wrote a sentence or two about the fascinating tales I heard on that walk, thinking I would use them in my North Hills Junior High (now Central York Middle School) history class; however they remained dormant, for 54-years, until I discovered their hiding place this past summer. Quoting three paragraphs that I penned in 1963:

“After hotel and club buildings burned, Lancaster lawyers purchased the neighboring inn to use. The great flood on 1933 damaged their building. It was never repaired.”

“The lawyers built a secret room with trick entrance under the old ice cream shack to hide unlawful drinks.”

“The lawyers had a secret signal system, somehow the water company was involved.” The water company referenced is the Marietta Gravity Water Company. I don’t recall if any additional details about that comment were talked about on the 1963 walk.

The initial research, following the discovery of my 1963 paper, came from a 1954 Sunday News article; which reported, “Wild Cat Falls Inn, whose open doors welcomed the public for scores of years, lived out its last active years about the late 20s and early 30s as a private haven of the Blackstone Club of the Lancaster bar.”

From that clue, my research turned to York County Deeds; where I discovered the 18.6-acres encompassing the area around the falls and sites of the hotel, the club and the inn, was sold by the Wild Cat Falls Association, via the go-between Owen Bricker of Lancaster, to The Blackstonian Club of Lancaster on November 7th, 1924. Going back from that date I’ve looked for a newspaper article reporting on a fire in the Glen Orchard Hotel and Wild Cat Club buildings, however I have not been successful; as of yet. If anyone knows the date when these buildings burnt down, please contact me.

Ornamental changes within the December 8th, 1924 architectural drawings, for The Blackstonian Club, were things such as: a bigger fireplace with a space for the club seal, and a “B” logo within the front railing. As a whole, the building drawings appear very close to earlier postcard images; with three exceptions: (1) The addition of a porch wrapping around the east side, (2) The removal of the smaller eastside structure to the rear; which may have been damaged during the fire in neighboring hotel and club, and (3) The only foundation addition is for the present open area under the smaller westside structure, which drawings noted it is now to be closed with stone.

Parts of the letters for “Ice Cream” can be seen on the smaller structure on the west side of the circa 1895 photo of the Wild Cat Inn. It is under that westside structure that a stone foundation was added per the 1924 drawings. The combination of the photo and architectural drawings corroborate what I heard in 1963: “The lawyers built a secret room with trick entrance under the old ice cream shack to hide unlawful drinks.”

Prohibition went into effect January 17, 1920 and beer sales became legal again on March 22, 1933. Further deeds show the Blackstonian Club owned the property until 1935, so if it was severely damaged in the flood of August 1933 and the club no longer required it as a speakeasy; selling it in 1935 does seem reasonable.

The tales heard in 1963 plus this recent research implies Lancaster lawyers purchased, modified and utilized the former Wild Cat Inn as a private speakeasy during much of prohibition.