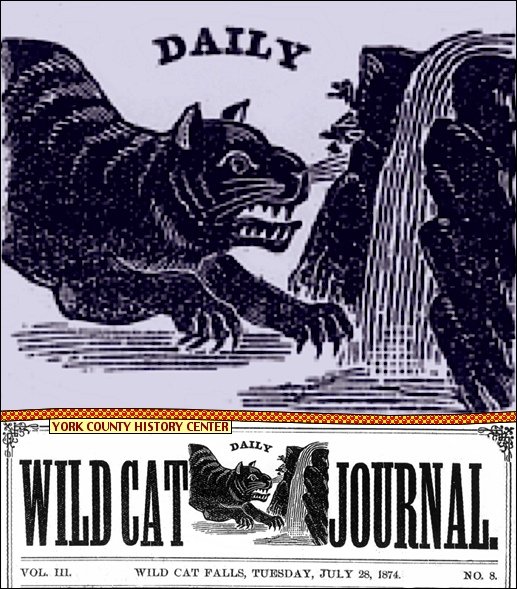 Several readers asked about the journal, which was published in the 1870s at Wild Cat Falls, along the Susquehanna River in York County. This illustration, from the collections of the York County History Center, shows the header from the July 28, 1874, issue of the Mason’s Daily Wild Cat Journal. I’ve enlarged the header logo; a combined drawing of a wildcat with a waterfall. Click on this LINK for a Full View of the illustration in this post if details are cut off in the cropping of illustration.

More than a century ago, Wild Cat Glen was known far and wide as the scenic wonder of York County. The narrow ravine, flanked with 150-foot high extremely steep rock faces, is located adjacent to the Susquehanna River; west of Accomac. Wild Cat Run, in draining some of the Hellam Hills, cascades down the rock faces as Wild Cat Falls.

In a 1963 walk to the falls, the reason for the Wild Cat naming came to light when several of the older guys started talking about an old sawmill, which stood at the base of the falls. My 1963 record of that conversation: “A sawmill contained a stuffed wildcat killed in the area. When a summer resort was created, the stuffed wildcat was adopted and became the name of the resort.”

In recent research: I did not discover any utilization of the Wild Cat name for the falls, before a Masonic resort was established there in 1870; whereupon the Mason’s obtained a 20-year lease on one section of the property in front of the falls. Shearer’s 1860 Map of York County confirmed a sawmill is at that site and an August 1870 newspaper article reported the newly established Masonic resort, there, is on the site of the old Eagle Saw Mill. Deed research revealed the original name of Wild Cat Run, prior to 1870, was Lehman’s Run. So I suppose the original name of the falls was Lehman’s Falls.

The journal was a publication of A. M. Rambo and distributed on the Wild Cat grounds every evening during the annual Masonic encampment at Wild Cat Falls. Whereas the first encampment, in 1870, lasted four days; the 1874 reunion lasted twelve days. The price was 50-cents for all twelve issues, of which a minimum of 500-copies were published daily.

The journal contained an important notice, “The board of Managers of the Wild Cat Falls Association will meet in the City of Philadelphia, at Masonic Temple, some time during next month. It is important that every member and stock holder be present as business of importance will be brought before the meeting.”

Through the 1874 reunion, attendance was members only; however the journal contained the announcement, “Many important changes will take place in the Reunion of next year. The buildings and grounds will be improved. There will be family days, that Masons can bring their wives, daughters and children to the Glen to share the beauties and enjoyments with each other.”

Besides articles, the journal contained “Drops from the Falls;” which was a column of short daily notes about those attending the encampment; such as: “Beat it who can? Kahlmus and Worrell climbed the face of Mount Eagle and returned by way of the Glen.” “Doc. Malony caught the most black bass. He is highly elated.” “Clepper is wonderfully sad. The ice chest failed to respond.” “Does Rambo snore? Ask Glatz.”