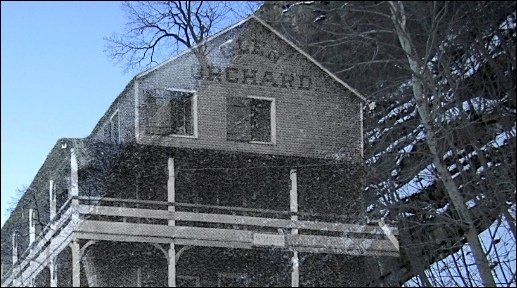 Photo ghosts an image of the upper floors of the Glen Orchard onto a photo of the exact spot in Hellam Township where that hotel once stood (Glen Orchard image from circa 1906 postcard in collections of S. H. Smith; ghosted over photo along River Drive in Hellam Township, York County, PA. S. H. Smith, 2019)
Posted by Stephen H. SmithApril 26, 2019April 26, 2019 All Posts, Buildings, Pennsylvania, Susquehanna River, Talks, Various Locations, York County

The Ghost of the Glen Orchard in Hellam Township

The Glen Orchard hotel sat in front of a high rocky bluff, which forms the eastern wall of Wild Cat Glen. Through the early 1920s, it was one of three Susquehanna River resorts, all in a row, which crowded the entrance to a narrow glen leading to Wild Cat Falls.

IMAGINE WILD CAT GLEN IN ITS HEYDAY will be presented Tuesday May 7th, 2019 at 6:30 pm in the Hellam Fire Hall. There is plenty of parking behind the fire hall—enter on Cherry Street. This FREE EVENT is open to all and sponsored by: Kreutz Creek Valley Preservation Society, Lower Windsor Area Historical Society and Historic Wrightsville.

More than a century ago, Wild Cat Glen was known far and wide as the scenic wonder of York County. The narrow glen, flanked with 150-foot high steep rock faces, is located adjacent to the Susquehanna River; west of Accomac. Wild Cat Run, in draining some of the Hellam Hills, cascades down the rock faces as Wild Cat Falls.

The presentation will not only cover the resort era, but will also delve into exploring the whole Wild Cat Run watershed over a wider time era. A few of the added-attraction topics include: lumbering, charcoaling, Burnt Cabin One-Room Schoolhouse, Marietta Gravity Water Company, the Blackstonian Club, the Big Inch pipeline and Hellam Hills Nature Preserve.

One part of the Wild Cat Glen Resort story relates to chestnuts of a specific variety. In 1878, Henry M. Engle, owner of a nursery in Marietta, acquired grafts of a unique chestnut tree that was thought to be an unintentional cross between the American and English Chestnut. It produced a sweet chestnut and the variety came to be named the Paragon Chestnut.

In 1885, it was discovered this chestnut flourished when planted, or grafted to mature trees, on the hillsides around Wild Cat Glen. In the years that followed, additional individuals joined in the endeavor, planting or grafting their own trees on the hillside; in the ever expanding Glen Orchard of chestnut trees.

A notice announcing the opening of the second Summer Resort, adjoining Wild Cat Falls, appeared in the July 17, 1901 issue of The York Daily. The three-story Glen Orchard hotel included ten mosquito and fly-proof sleeping apartments. The dining room was also advertised as fly-proof. And of course there were wrap-around porches so everybody could sit and enjoy a view of the Susquehanna River.

Mr. A. S. Flowers, the builder of the Glen Orchard, was a Paragon Chestnut fanatic. Years prior to building his hotel, he was one of the individuals that planted or grafted trees on the hillsides surrounding Wild Cat Glen.

One of the attractions of all the Wild Cat Glen resorts was the food. The Glen Orchard served the traditional food of the day, however Mr. Flowers also featured nutting dinners where the Paragon Chestnut was everywhere.

At their peak, nearly 800-acres of hillsides, near Wild Cat Falls, contained Paragon Chestnut trees. However by 1920, the Glen Orchard trees were all dead, killed in a single season by the chestnut blight. The bark-less white skeletons, of these relatively young trees, covered the hillsides until they rotted and fell. People in Marietta reminisced, “We used to be able to smell the rich odor of the chestnut blossoms clean across the river hills at Wild Cat Falls, in York County, that were covered with these grand trees, and the balm put fresh life in one’s lungs when the breezes were wafted across the waters.”