Why the Discrepancies in Civil War Records? Part 3: George R. Prowell on Burning of The Columbia-Wrightsville Bridge

This series grew out of my post A Personal Connection to the Burning of The Columbia-Wrightsville Bridge 150-Years-Ago.  This week I’m delving into the slight discrepancies between the accounts about the bridge burning; especially focusing on the list of names in the force of civilian carpenters and bridge-builders employed by Robert Crane.  The parts in this series include:

Prowell’s “Bridge Burned” account was a find after I first discovering “Data Concerning The Destroying Of The Wrightsville-Columbia Bridge, June, 1863” in the Library of the York County Heritage Trust.  The typewritten Robert Crane report in the files at the York County Heritage Trust came from an article in the Wrightsville Star; a local newspaper.  I was somewhat curious about differences in these two accounts, but since my Great-Grandfather John Gilbert appeared in both, I did not investigate for original sources any further at the time.

Last year I discovered Robert Crane’s report in the Official Records by accident; through a Google Search on John Gilbert and related terms.  A comparison of my collection of three accounts of the bridge burning showed that original source for Prowell’s “Bridge Burned” account was Robert Crane’s report in The War of the Rebellion: a Compilation of the Official Records of the Union and Confederate Armies, Series 1, Volume 27, Part 3 (Gettysburg Campaign), Pages 410 & 411, Published in 1889.

I’ve circled only three minor differences between Prowell’s “Bridge Burned” account and Robert Crane’s June 29th 1863 report in the Official Records.  Crane reported the bridge 1-1/4 mile in length, while Prowell edits this to 1-1/8 mile in length.  Maybe the term “rebel” was not politically correct in 1907, Prowell used “enemy’s” instead.  Prowell modified the spelling of Westly Up to Westly Upp. 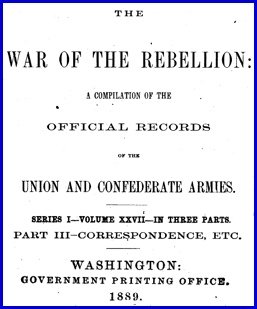 This is the title page of the volume with Robert Crane’s report in the Official Records: The War of the Rebellion: a Compilation of the Official Records of the Union and Confederate Armies, Series 1, Volume 27, Part 3 (Gettysburg Campaign), Pages 410 & 411, Published in 1889 by the United States War Department.  It is my experience doing family history research, as the reason for gravitating towards original documents as much as possible; in this case I have an example why.

The following is a scanned copy of Robert Crane’s report on pages 410 and 411 from the published Official Records: 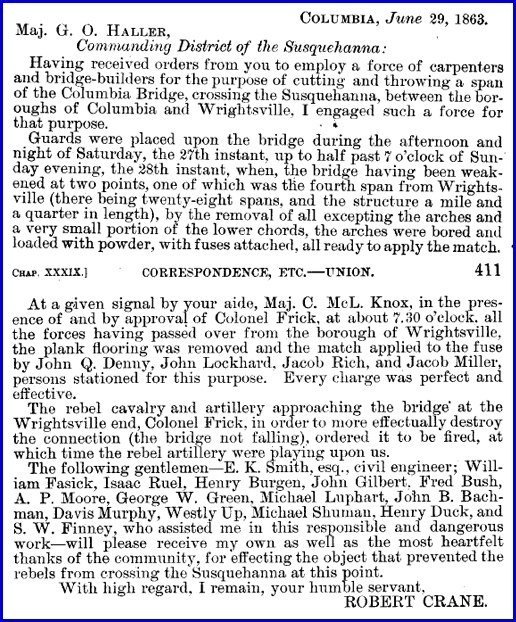 The Official Records have been transcribed on several Internet sites.  This screen shot is from the eHistory site at OSU:

This screen shot shows the transcription starting at the top of page 411.  It has been noted at various family history conferences, I have attended, that one of the top transcription errors in family history documents appearing on the Internet is the dropping of names in text containing strings of names.  This single paragraph at the top of page 411 contains two examples.

TAKE AWAY: Get your information as close as possible to the original document.  This holds true for not only family history research, but also for history research in general.

On Friday I’ll conclude my delving into the slight discrepancies between four accounts about the bridge burning; especially focusing on the list of names in the force of civilian carpenters and bridge-builders employed by Robert Crane.  Besides spelling differences in the names between the four accounts, three names do not show up on every version.