Why the Discrepancies in Civil War Records? Part 2: Jacob Hoke on Burning of The Columbia-Wrightsville Bridge

This series grew out of my post A Personal Connection to the Burning of The Columbia-Wrightsville Bridge 150-Years-Ago.  This week I’m delving into the slight discrepancies between the accounts about the bridge burning; especially focusing on the list of names in the force of civilian carpenters and bridge-builders employed by Robert Crane.  The parts in this series include:

Jacob Hoke was a first-hand witness in his book “The Great Invasion of 1863” or subtitled “General Lee in Pennsylvania.”  Jacob was a merchant in Chambersburg, PA during the Rebel occupation of that town during the Invasion of 1863. 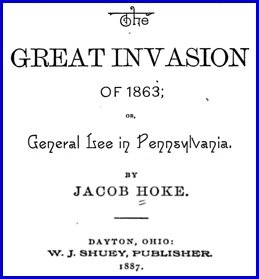 Jacob Hoke used his diary, personal observations and an interest in Civil War history to write one of the earliest books, filled with first-hand accounts, on what is overall known as the Gettysburg Campaign.  His book was published in 1887.

My post last Wednesday included the June 29th 1863 report by Robert Crane detailing the destruction of the Columbia-Wrightsville Bridge to halt the eastward invasion of the Rebels through Pennsylvania.  Crane’s report is from The War of the Rebellion: a Compilation of the Official Records of the Union and Confederate Armies, Series 1, Volume 27, Part 3 (Gettysburg Campaign), Pages 410 & 411, Published in 1889 by the United States War Department.

A short section of Jacob Hoke’s 1887 book discusses the burning of The Columbia-Wrightsville Bridge.  Jacob Hoke bucked the trend on the majority of accounts written about this event; he included the names of the force of carpenters and bridge builders, but not the names of the four men placed in charge of lighting the fuses.  Here is the relevant paragraph on page 186 of “The Great Invasion of 1863” by Jacob Hoke:

This week I’m examining four accounts where the full list of carpenters and bridge-builders are listed.  Besides the Robert Crane report of June 29th 1863, there is this 1887 book by Jacob Hoke, a circa 1890s newspaper article, and a 1907 county history.  Accounting for spelling variations, the first fourteen names in the Robert Crane report match the first fourteen names in this book by Jacob Hoke.  The fifteenth and final name in each list is decidedly different; S. W. Finney versus I. C. Turner.

What was Jacob Hoke’s source for his list?  Hoke’s book was published two years before Crane’s list was published in the Official Records in 1889.  Do any of my readers have any information on S. W. Finney or I. C. Turner?  Like everyone else in the list, they would have been civilians in Columbia, PA during June of 1863; however I’m looking for further biographical information.

Tomorrow I’ll continue delving into the slight discrepancies between four accounts about the bridge burning; especially focusing on the list of names in the force of civilian carpenters and bridge-builders employed by Robert Crane.  Besides spelling differences in the names between the four accounts, three names do not show up on every version.