Why is the Steam Into History locomotive named York #17 ?

I was walking along the Rail Trail near Hanover Junction on Sunday and afterwards stopped in New Freedom to see the York #17.  The train had just completed a round trip run to Glen Rock.

The York #17 is a 1860s era replica steam engine.  Though interpretative re-enactors on the train, travelers can experience York County’s role in Civil War History.  The excursions travel part of the Northern Central Railway route in York County, one of the targets of Confederate invaders during June of 1863.  President Abraham Lincoln traveled this same route in November of 1863 on his way to deliver the Gettysburg Address.

Continue reading to learn why this Steam Into History locomotive is named York #17.

I purchased a ticket for a ride on this train later in June and asked the question, “Why is this locomotive named York #17 ?”  I was told they occasionally get that question and that I should check their site.  This explanation being posted several days ago (on Wednesday May 29th): 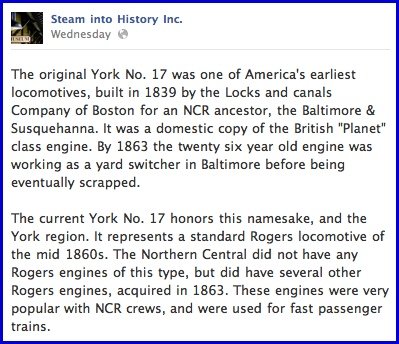 John McNulty pointed out The Locks and Canal Company, which built the original York No. 17, was actually located in Lowell, Massachusetts.  Their corporate offices were in Boston, but locomotives and other machinery were built in Lowell.

The York #17 is a replica of a Rogers 4-4-0 Steam Locomotive that would have been built in the 1860s era.  Rogers Locomotive and Machine Works were based in Paterson, New Jersey.  This company built more than six thousand steam locomotives for railroads not only in the United States but also around the world.

The 4-4-0 designation is a classification notation for steam locomotives. 4-4-0 represents the arrangement of 4-leading wheels, 4-powered and coupled driving wheels, and no trailing wheels.  There are a few original Rogers 4-4-0 Steam Locomotives that can be found in museums.  For example, the Henry Ford Museum in Dearborn, Michigan has Serial No. 812, built for the Atlantic and Gulf Railroad in 1858.  The Southern Museum of Civil War and Locomotive History in Kennesaw, Georgia has Serial No. 631, built for the Western and Atlantic Railroad in 1855.  The S/N 631 locomotive is the most famous Rogers 4-4-0, it was named The General, and was the principal locomotive in the Great Locomotive Chase that I wrote about at the end of the post Looking Back on the 100th Anniversary Commemoration of The Battle of Gettysburg; Part 1.

I’ve used trade journals and the like for reference material for my series counting down the 50 top factories in York County at the end of 19th Century.  I decided to do a similar search on Engine 17 and found the following interesting article written by an employee of the Northern Central Railroad in 1873.

I know the Rogers 4-4-0 Steam Locomotives were normally run at 15 mph, with short bursts to 25 mph.  I wonder if Northern Central engine 17, in 1873, was a later Rogers, since they were known as a maker of fast engines?  I’ll keep checking in additional sources and post again on Friday.