What did these 107 Yorkers have in common, during July 1872, for inclusion in a listing on Front Page of The York Gazette?

The answer: These 107 Yorkers are some of the many persons in and around York, who have and highly recommend the Success Washing Machine.  This post resulted from researching a question from one of my readers; she asked, “What was the cost for an S. Morgan Smith washing machine?”

An 1879 flyer, promoting the Success Washing Machine, included this illustration of a woman operating the S. Morgan Smith hand-crank washing machine.  More drawings and photos of this washing machine are in these related posts:

Continue reading to find out the cost of an S. Morgan Smith washing machine and discover if any of your ancestors are in the July 2, 1872 list of 107 persons who have and highly recommend the Success Washing Machine. 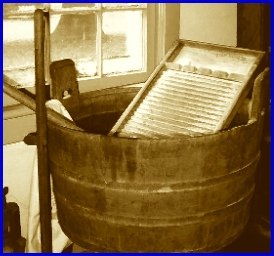 The list of 107 Yorkers was part of a large ad placed by S. M. Smith on the front page of the July 2, 1872 issue of The York Gazette.  The ad claims that clothes washed with the Success Washing Machine can be done using less than half the labor required by hand; i.e. versus clothes washed via a washboard and a wash tub.  The ad asked customers to address all orders to: S. M. SMITH, 436 West Market Street, York, PA.

I’ve alphabetized the list of 107 Yorkers, by surname, that appeared in the July 2, 1872 ad.  Spelling is taken directly from the ad.  The heading for this list stated; “The following are the names of some of the many persons in and around York, who have and highly recommend the Success Washing Machine.”