It is my understanding that a developer has put forth a rezoning proposal from the presently zoned “Neighborhood Commercial” to “Highway Commercial” zoning. “Highway Commercial” is the zoning that exists in the areas surrounding the York Marketplace and the York Mall along East Market Street. Please attend the Springettsbury Township Board of Supervisors Meeting at 7:00 P.M. on May 28 to voice your concerns during public comment at the beginning of the meeting. Spring Lane LLC has requested this rezoning proposal; their request is on the agenda later in the meeting.

Residential neighborhoods nearly surround this area where rezoning is being proposed; with Springetts Manor Apartments bordering a large portion of it. This zoning change is a necessary precursor to development that could demolish three historically significant properties and change green space to gray space.

Recently, Terrence Downs took the photo of the east side of the historic property at 3405 East Market Street. Trees nearly obscure the view of this house, except for this view when traveling west on Market Street; look for it off to your right just before you get to the Paddock.

In this post, I continue my look at “Bloomingdale,” the house at 3405 East Market Street. Rob Frey, Jr. provided some additional comments, providing more insight into the interior of this home where he grew up.

I loved the full open staircase that went from the first floor, passing two stained glass windows on the landing and continuing all the way up to the third floor. As a kid, I remember lowering a string with plastic solders attached all the way down from the top floor, passed the second floor, until it reached the radiator on the first floor. Mission accomplished.

I loved to explore the huge attic, which is a full open space covering the entire top floor of the house. It was full of old mementos i.e. old photo albums, wooden boxes and things that were saved from years gone by. I would spend hours looking through all the old boxes and dusty shelves.   Once in awhile I’d find a treasure, which I’d clean up and then display in my second floor bedroom.

The following “WEISER” sign is one such item discovered in the attic. The house at 3405 East Market Street was named “Bloomingdale” by Rob’s great grandfather, Charles S. Weiser. Rob knew this sign was probably from the time his great grandfather was in the banking business, although eventually Rob could not resist putting a “BUD” sign in front of his “WEISER” sign when he was going to college.

Charles S. Weiser (1838-1909) was one of Springettsbury Township’s most prominent residents when the Township was established in 1891. However it was his father Charles Weiser (1796-1867) that purchased the initial land in the countryside; at what is now the northeast corner of East Market Street and Mt. Zion Road. This initial purchase of 36.8-acres was made March 28, 1848, and included 916-feet of frontage, along what is now East Market Street.

Charles Weiser (1796-1867) did not live on this property in the country; he lived in a house where the Yorktowne Hotel now sits in Downtown York. His sons, John A. Weiser and Charles S. Weiser, eventually built the houses now standing on this land. These houses initially served as summer residences, however eventually becoming full time residences.

Charles Weiser (1796-1867) established a banking house in York during 1856; known as the “Banking House of Chas. Weiser.” The “WEISER” sign could have come from that business. Alternately the sign could have come from the successful dry goods firm of J. & C. Weiser, established in 1818 by Charles Weiser in partnership with his older brother Jacob Weiser. That business operated out of the Weiser Building, built by their father Samuel Weiser, in place of part of the Golden Swan Tavern (see Jim McClure’s post on Golden Swan Tavern,) that stood on the southeast corner of the square in York. 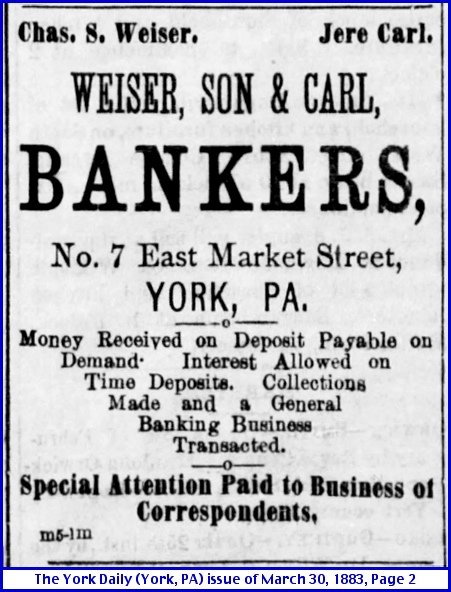 The Weiser Bank building was located on the north side of East Market Street; nearly across the street from the Weiser Building, where Charles S. Weiser’s brother, John A. Weiser, continued to run the mercantile store, until John’s two eldest sons succeeded him in 1883. It is these brothers, John A. Weiser and Charles S. Weiser, which figure prominently in the houses now standing at 3323 and 3405 East Market Street in Springettsbury Township.

York County National Bank bought the Weiser, Son & Carl banking house in 1889 and used the three-story Weiser Bank building as their headquarters for a number of years before settling on 12 East Market Street as the permanent headquarters location in 1929. Through a long series of bank mergers, this is now Wells Fargo Bank in Downtown York.

These are several businesses and buildings that could have utilized the “WEISER” sign found in the attic of 3405 East Market Street. I’ll keep an eye out for old pictures in the collections of the York County Heritage Trust, to see if this sign shows up in any of them.

This April 1989 photo of 3405 East Market Street is from the late-1980s Survey by Historic York, Inc. of Historic Properties in York County. The Colonial Revival House, “Bloomingdale”, at 3405 East Market Street has also been on list of the most historically significant structures in Springettsbury Township ever since the first list was issued in 2001. It is a house that deserves to be preserved. Does this place or green space matter to you? If so, you may want to attend the Board of Supervisors Meeting at 7:00 p.m. on May 28th and voice your concerns during public comment at the beginning of the meeting.