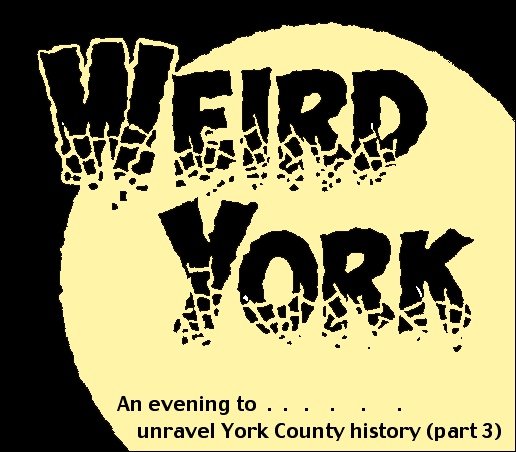 The December 6th evening to unravel York County history is Retro York’s 2017 third-edition of the annual York Daily Record event. The theme this year is Weird York. I will be one of five local historians participating.

The event is at a new location this year; DreamWrights Center for Community Arts at 100 Carlisle Avenue in York. The program starts on December 6, 2017, at 7:00PM. Tickets are $10 for general admission and can be purchased at this site.

A little background on the two topics I’ll be presenting. For me, during the 50s and early 60s, summer weekends often included a visit to the Smith bungalow, of my Grandfather; located along the Susquehanna River; west of Accomac. Many family gatherings of 30, or more, were typical. We usually went on at least two big walks each bungalow weekend; one eastward to Accomac and one westward to Wild Cat Falls.

During 1963, when I turned 14-years-old, I helped with the end-of-winter bungalow clean-up weekends for the first time. One of those weekends included an expanded walk exploring areas around Wild Cat Falls and up along Wild Cat Run that were normally off-limits.

Old-timers from several other bungalows joined us; it was a walk filled with fascinating tales I was hearing for the first time. A day after that 1963 walk, I wrote a sentence or two about each of those stories, thinking I could use them in my Junior High history class; however I never did. They remained dormant, for all those years, until I researched the tales during the past few weeks.

I was delighted to find most of the stories are backed up with multiple primary sources and many neat finds, such that the research will be rolled out as one of my new presentations in 2018. On December 6th, at the Weird York event, I’ll be sharing a few highlights in two areas:

(1) Wild Cat in the Hellam Hills … examines the naming origin of Wild Cat Falls and the multiple resorts located at Wild Cat Glen. Individuals, primarily from Lancaster County, heavily promoted that scenic wonder much more so than the locals. Isn’t that a little weird, Lancaster County heavily promoting a York County attraction?

(2) Reservoirs in the Hellam Hills … collected pristine water and via gravity it was piped under the Susquehanna River into Lancaster County. The Marietta Gravity Water Company sold some of that water back to York County river bungalows; isn’t that a little weird.

I searched for the word “weird” in all my previous posts. It showed up in the following posts associated with a ghost at the Longstown One-Room Schoolhouse. I’ve also included the link to my post about the Smith bungalow.