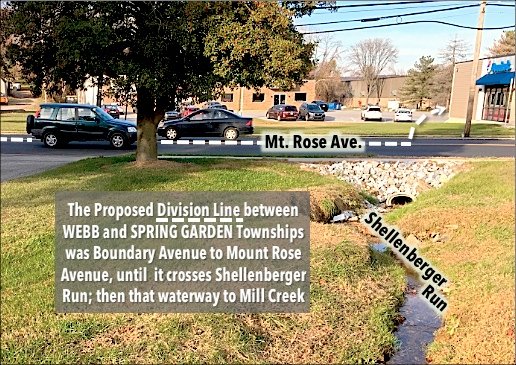 In 1892, voters narrowly turned down the ballot question for establishing Webb Township via a separation from Spring Garden Township. In the vote aftermath, the backers of this proposal were chagrined, believing with just a little more campaigning they could have changed the minds of 22 of the voters; thus reversing the result and establishing Webb Township, from the whole southern part of Spring Garden Township.

The northeast view, next to the Mount Rose Cemetery offices, illustrates a section of the 1892 Proposed Division Line between WEBB and SPRING GARDEN Townships. The whole Division Line extended from York City, along Boundary Avenue to Mount Rose Avenue, until where it crosses Shellenberger Run; then along that waterway to Mill Creek. All of Spring Garden Township south of this Proposed Division Line, i.e. the Mount Rose Cemetery side, would have been in Webb Township with a different result in the special election held Tuesday November 29, 1892.

Spring Garden Township had one polling location in 1890. It was located in the heart of Freystown, just east of York City; at the Public House of Reuben Doll, and commonly known as the Spring Garden Hotel.

The talk of division came from two directions; in the distant northeast and distant southwest areas of the township. These areas had repeatedly requested polling locations in their areas; however those requests fell on deaf ears to a governing body almost exclusively made up of and representing Freystown residents.

Those outlying areas repeatedly had no success in getting any of their people elected to positions in the township. There were claims of unequal taxation for roads and schools. Those became primary issues in the Petitions for Division; made to the Court of Quarter Sessions of the County of York.

The Courts approved a Petition for Division, by the people in the distant northeast area of Spring Garden Township. The Proposed Division Line between the new township, named SPRINGETTSBURY and SPRING GARDEN Township, would be Mill Creek. A special election was ordered and held on Tuesday February 17, 1891. At the time the whole Spring Garden Township had about 1,350 voters.

There was a 47% turnout for the election, where the results revealed; 597 voted FOR Division, and 42 voted AGAINST Division. Those results were made official at the next Court of Quarter Sessions, with a Decree of Division on April 20, 1891; thus establishing Springettsbury Township. Springettsbury Township encompassed 16.38-square-miles and Spring Garden Township was reduced to 8.36-square-miles.

Attempt to establish Webb Township in 1892

Encouraged by the success in the division by the people in the distant northeast area of Spring Garden Township, the people in the southwest area of the township submit a Petition of Division on August 22, 1892. In an attempt to neutralize the issue of distance to polling places, Spring Garden Township had established three precincts, with three polling places in their reduced 8.36-square-mile township.

Precinct 1 included all parts of Spring Garden Township north of a line between Market and King Streets; with that polling place remaining at the Spring Garden Hotel. Precinct 2 encompassed most of the southern part of Freystown; with a polling place at Anstine’s School House on Pattison Street. Precinct 3 included all parts of Spring Garden Township south of a line extending along Boundary Avenue to Mount Rose Avenue, until where it crosses Shellenberger Run; then along that waterway to Mill Creek. The polling place for the Third Precinct was designated as the Violet Hill Hotel.

Before Spring Garden Township established the three precincts, the faction in the southwest area of the township had been considering South Queen Street as the proposed Division Line for their new township. However, possibly emboldened by the Springettsbury vote, they proposing the whole Third Precinct as their new township; to be known as WEBB TOWNSHIP; named for the highest summit in their new township, Webb’s Hill.

The following map is from the August 22, 1892 Petition of Division. It shows the proposed Division Line between WEBB and SPRING GARDEN Townships; an enlarged section is shown later in this post. This map and other associated documents were discovered at the York County Archives, while researching further specifics about the formation of Springettsbury Township.

There was a 54% turnout for the election, where the results revealed; 220 voted FOR Division, and 262 voted AGAINST Division. In the vote aftermath, the backers of this proposal to create WEBB TOWNSHIP were chagrined, believing with just a little more campaigning they could have changed the minds of 22 of the voters; if they had done so, it would have resulted in 242 votes FOR Division, and 240 votes AGAINST Division.

The following enlarged section of the map of the proposed Division Line between Webb and Spring Garden Townships, shows names of individuals residing on the south side of Boundary Avenue; i.e. they would be in Webb Township if the question passed. We know all of these individuals likely voted FOR Division, because of the 99 voting in Precinct 3, i.e. want-to-be Webb Township, there was only one vote AGAINST Division. In the Freystown area, essentially Precincts 1 and 2, the vote was 122 voting FOR Division, and 261 voting AGAINST Division.

The 880-foot summit in the southwestern part of Spring Garden Township is known by several names. The earliest name, Shank’s Hill, comes from a 1788 entry in a Diary of Jacob Barnitz. York businessman James B. Webb purchases summit property in the 1820s, via showing up as a neighbor, within deeds. Whereupon the Webb’s Hill name originates; and seems to remain the primary name identified with the hill through the early 1900s.

Shearers 1860 Map of York County records: Shunk’s Hill. However, James Webb’s widow, Mary Webb does not sell the 83-acre summit property until 1869. It is interesting that Deed has two of the neighbors listed as Jacob Shank and John Shank. Did the surveyor of the 1860 Map, ask who owns this and one of the Shank individuals replied Shank, thinking they were asking about their property; and the surveyor misspelled that answer as Shunk, just like other misspelled names on that map.

The prominent usage of Webb’s Hill from the late 1800s through the early 1900s shows up in several notable examples. A national publication, The Exchangers’ Monthly contains an article about the discovery of crystals found near the summit of Webb’s Hill in York County; per page 7 of the December 1887 issue. In 1892, the citizens of southwestern Spring Garden Township choose Webb, via Webb’s Hill, as the name of their proposed township.

George Prowell’s 1907 History of York County, PA has both columns on page 1077, in Volume 1, devoted to Webb’s Hill. In that article, he also mentions “This place is frequently called Shunk’s Hill or Shank’s Hill, in honor of a family that once owned a portion of the land.” I have also seen the spelling Shenk’s Hill, used in newspaper articles.

Another example is the 1893 publication “Art Work of York,” along with historical commentary by Edward Stuck, Editor York Evening Age, and published by The W. H. Parish Publishing in Chicago. The following is an annotated section of one of the photos taken from the summit of Webb’s Hill for that publication.

To show how that area was developed as Wyndham Hills, the following aerial photo of the upper elevations in Wyndham Hills is utilized. The “Webb’s Hill” summit, is now known as Hill Top Place. Also pointed out, is the location of the still standing mansion “Lower Grantley”; which was the Estate of George Small [1825-1891], who was married to Mary Grant Jackson. George Small named his estate Grantley after the Grant name that went back through his wife’s family.

In the aerial photo, the point of view of the following photo is indicated. The northward looking photo was taken from highest spot in Spring Garden Township; Hill Top Place. In the center of the photo, above the grass, is the west end of York City in the distance. At the right side is the relatively new above ground structure over a water reservoir; most of which is below ground.

Since the 1930s, the York Water Company has maintained a covered reservoir on this hill to supply water, via gravity flow, to places in Spring Garden Township and York Township, which are at higher elevations than Reservoir Hill.