Walking the Lincoln Highway from Coast-to-Coast

One of my readers thought she’d figured out my comment that ended last Wednesday’s post; where I wrote, “check back next Monday for my experience walking the Lincoln Highway from coast-to-coast.”  She thought Monday is April 1st; that is your idea of something for April Fools Day.

She is partially correct.  Although I did not actually walk the Lincoln Highway from coast-to-coast (April Fools), I did walk the equivalent distance and “virtually walked” this highway.  This is the story of how and why this happened.

I attended a motivational lecture a few weeks before receiving my Masters Degree during November of 1977.  I came away with several things; one was Setting Life Goals and tracked their progress, at least yearly.  One of my life goals established at the beginning of 1978 was to walk at least 300 miles per year.  The criteria that I used to log these miles was to include only fast paced walks of at least 30 minutes continuous duration.

I converted the time that I walked into miles based upon a 15 minutes per mile pace.  The miles were recorded as tick marks on a calendar.  At year-end the tick marks were counted and logged as miles walked each year.  By the end of 1995, I had walked a total of 6,667 miles since the beginning of 1978; an average of 370 miles per year.  In those 18 years, I barely missed achieving my 300-mile goal during only four of those years.

In 1995, I wrote, “Next year I will definitely pass a personal 6,778-milestone.”  One might ask, why select 6,778 miles as a milestone.  Near the end of the first year that I logged miles walked, I saw an article on the Lincoln Highway; the 6,778 miles is equivalent to a round-trip walk along this highway.

At the end of each year, I would determine the equivalent location along the Lincoln Highway that I would have walked during the year; initially traveling west to San Francisco, and then returning east to New York City, and finally returning west to the starting point in York.  There was a huge map of the United States hanging on the wall of the Engineering Library at York International; I would use a mileage-scaled piece of paper to determine the closest town that I hypothetically ended up in at the end of each year.

Each year I would search out information on my newest town along the Lincoln Highway.  I often thought that sometime in the future I would take this trip; driving the entire length of the original Lincoln Highway route, with the intent of documenting the history and current circumstances of towns and sites along the route.  Years later in 2005, I saw that such a book had recently been published by Stackpole Books: “Greeting from the Lincoln Highway, America’s First Coast-to-Coast Road” by Brian Butko.

In 2006, I put together the illustration of the Lincoln Highway “Walk” for my Autobiography.  My hypothetical Lincoln Highway walked-to location at the end of each year is as follows:

How have I done with my walking goal since 1995?  Since retiring, on three occasions, I have gone over the 1000-miles walked per year.  At that rate, I could hypothetical walk coast-to-coast in a little over 3 years.

The Lincoln Highway, conceived in 1913, was America’s first coast-to-coast highway.  During 1913, many city streets were paved but most rural roads were still dirt.  The Lincoln Highway Association was formed with a plan to link already paved roads by improving strategic dirt roads throughout the country.  The association engaged more in planning and fund-raising than in actual road construction. 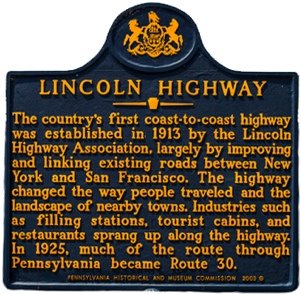 This Pennsylvania Historical and Museum Commission marker is located at the Columbia entrance to the Route 462 Veterans Memorial Bridge between Wrightsville and Columbia.  The marker was dedicated during 2003 for the 90th Anniversary of the conception of the Lincoln Highway.

The Lincoln Highway was actually completed in 1926, becoming the first fully paved route across the United States.  The highway started in Times Square in New York City.  It originally passed through 13 states (New York, New Jersey, Pennsylvania, West Virginia, Ohio, Indiana, Illinois, Iowa, Nebraska, Wyoming, Utah, Nevada, and California) before ending in Lincoln Park in San Francisco.  The Lincoln Highway’s original length was counted as 3,389 miles.  It was shortened in subsequent years by straightening and bypasses.

The Lincoln Highway was broken up into U.S. 1, U.S. 30, U.S. 530, U.S. 40, and U.S. 50.  Nearly two-thirds of the length was originally U.S. 30; from Pennsylvania to Wyoming.  In 1928 it was mandated that all markers of named roads be taken down.  The last major activity of the Lincoln Highway Association was to mark the highway not as a route from one destination to another, but as a memorial to Abraham Lincoln.

On September 1st 1928, enlisting thousands of Boy Scouts across the country, at an average of about one per mile, they installed 3400 small concrete markers with a small bust of Lincoln and the inscription, “This highway dedicated to Abraham Lincoln.”  Over the years, due to road widening and development, many of these markers have been removed.  However even now, in driving along the route of the original Lincoln Highway, one still notices some of these markers.