A chicken and waffle full dinner cost 50-cents in 1915 at Ye Olde Valley Inn along the Lincoln Highway, 3-miles east of York, in Springettsbury Township. Ann Turner wanted to know whether the waffles were topped with fried chicken rather than shredded chicken & gravy.

Ann remembered her grandmother telling a tale of her younger years in the area, when people came from all over, including Lancaster County, for the unique chicken & waffles sold at Ye Olde Valley Inn. Ann wondered maybe they were unique because the waffles were served with fried chicken, like almost everywhere else in the country, except Central Pennsylvania where waffles are instead smothered with shredded chicken and gravy.

Everybody I’ve talked to, that ate chicken & waffles at Ye Olde Valley Inn, before it was demolished in 1962, remembered Pennsylvania Dutch style chicken & waffles; i.e with shredded chicken and gravy. Unfortunately no first hand memories go back to before 1919, which is the year the family of Ann’s grandmother moved to Illinois.

Recently, while adding a donated item to Ye Olde Valley Inn file of the Springettsbury Township Historic Preservation Committee, I noticed something that popped out at me on the circa 1915 menu in that file. A century ago, the chicken and waffles at Ye Olde Valley Inn were “Ole Virginia Style;” see my green arrow on the menu. I still remember when our family took the first vacation to Virginia Beach in the early 1960s; we ordered chicken & waffles and surprisingly got waffles with pieces of fried chicken laying on them.

A July 14, 1922, article in the Harrisburg Telegraph reported: “Members of the Columbia Rotary Club with their families and friends, motored to Ye Olde Valley Inn, near York, where they held the weekly business meeting and ate chicken and waffles.” According to the circa 1915 menu, their 50-cent Chicken and Waffle Full Dinner included: “Soup, Pennsylvania Dutch Salad, Dressing, Ole Virginia Style Chicken and Waffles, Corn Bread, New Potatoes, Green Corn on Cob, Preserves, Pudding, Ice Cream, Home Made Cake, and Ice Tea or Coffee.”

Here is the full circa 1915 Ye Old Valley Inn Card in Collections of Springettsbury Township Historic Preservation Committee. I’ve zoomed in on the “Chicken and Wafle .50 Dinner” sign along the Lincoln Highway front of the building. A marketing class taught me that sometime your can draw attention by purposely misspelling on a sign; however here I believe the sign painter simply did not plan ahead and ran out of space for the second-f.

After the Lincoln Highway was established in 1913, an advertising scramble ensued in the years immediately following of claims to be the oldest so and so, along the Lincoln Highway. I think the claim Ye Old Valley Inn was built in 1697 was such a ploy, with no real documentation to back it up. In the early 1930s thorough research was conducted that documented the origin of the inn actually went back to 1738. With that in mind, I’ll quote all the small text below the photo of the inn; which shows the east side and a front side mostly blocked by trees.

Built in 1697. The oldest Inn on the Lincoln Highway. Furnished throughout in original Antiques. Replete with Colonial, Washingtonian, and Civil War Historical Interests. Originally Indian Block House. Located in the Garden Spot of York County. Table supplied from our own farm. Southern Cooking. Patronized by Autoists and others desiring refined surroundings, home-like atmosphere and excellent service. Free Camping Sites.

William Ball was the proprietor of Ye Olde Valley Inn at the time of the circa 1915 menu. By 1922, A. G. Ramsey had become the proprietor; where Ramsey’s post cards continue to note “Chicken and Waffle Dinners a specialty.”

It is possible that A. G. Ramsey switched from “Ole Virginia Style” to “Pennsylvania Dutch Style” chicken and waffles, or possibly an inn proprietor that followed; such as Alexander Rose-Leigh or Shirley C. Whitenack.

In 1946, S. C. Whitenack placed several newspaper advertisements promoting the inn’s restaurant in conjunction with a newly installed modern kitchen. The following 1946 photo of the inn, from the April 4, 1946, issue of The Gazette and Daily, is the same circa 1915 viewpoint of the inn; i.e. showing the east side and a front side, now with all the trees removed. 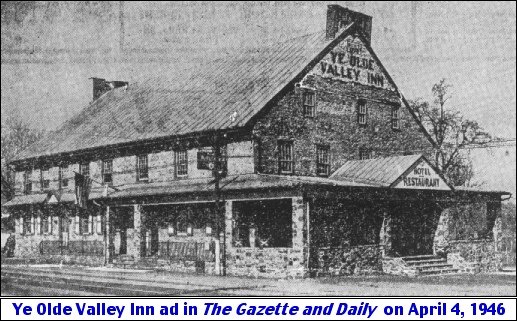 The Lincoln Highway is a State Road. When the State decided traffic volume reached a point where the road had to be widened, all the trees in front of the inn were cut down in the early 1930s to accommodate the wider roadway. A decade late, more traffic required, for safety reasons, movement of the main entrances to the east side, as shown in the 1946 photo. Shirley C. Whitenack and his wife Retta were the proprietors of the Ye Olde Valley Inn for 25-years; up till her death in 1960.

Ye Olde Valley Inn was demolished in 1962 for further widening of the Lincoln Highway. Some materials were repurposed to build a smaller version of the original inn at the Susquehanna Memorial Gardens in York Township; where it serves as the cemetery offices.

In terms of present landmarks, Ye Olde Valley Inn (1738-1962) was located directly at the main entrance to the York Mall; i.e. centered on the entrance road, adjacent to the east side of the large York Mall sign. That location can be pinpointed via the four exposure blend from a 1955 aerial photo to a 2016 aerial photo; as shown at the end of the post: Santa flight that started a York tradition.