The Vulcan Electric Gear Shift had it origins in 1909 U. S. Patents by Frank Beemer.  The Vulcan Motor Devices Company of Philadelphia purchased the rights to these patents.  Vulcan worked on commercializing the Electric Gear Shift design.  Initially they had some problems, however by 1913 Vulcan had a marketable product.

Pullman Motor Car Company in York, PA, was one of the initial car makers to offer the Vulcan Electric Gear Shift on one of their models; in this case the 1914 Pullman Model 6-46A.  The appeal of these devices created a stampede from other carmakers for the product.  The Vulcan Motor Devices Company had trouble meeting demand and ultimately decided to outsource the manufacturing to The Cutler-Hammer Manufacturing Company of Milwaukee; they held the exclusive license under the Vulcan Patents. 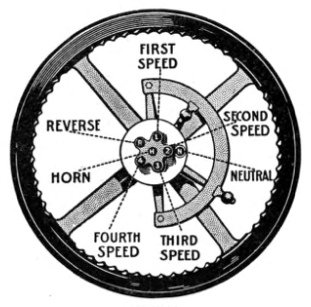 Cutler-Hammer published a manual entitled Gear Shifting by Electricity, written by H. E. Coffin.  This image of the arrangement of the shift buttons in the center of the steering wheel is from that manual (Manual is available digitally at the Hathi Trust Digital Library).  To shift gears, one merely pushed the appropriate button while depressing the clutch petal and the appropriate shifting solenoids responded electrically to shift gears.

Other Pullman related posts include: