The Veterans Memorial Gold Star Healing and Peace Garden is a commemorative arboretum dedicated to all who serve in the United States Armed Forces.  This living memorial is a gathering place to honor all Veterans, and remember the fallen in the war on terror.

This quote from www.goldstargarden.com is reflected through my photos appearing in this YorksPast post.  Several weeks ago, I was searching for new areas to take my daily walk.  One day I parked at Mount Rose Cemetery and looped through neighborhoods to Veterans Memorial Park and back.  That was when I walked by the recently completed Gold Star Healing and Peace Garden for the first time. 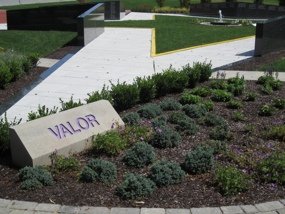 The Veterans Memorial Gold Star Healing and Peace Garden is impressive and very well done.  The granite Walls of Valor at the entrance contain the names of all the York County fallen from those who served from WWI through the current War on Terror.  The four other granite Walls of Valor within the garden contain the names of all the Pennsylvania fallen from those who served during the War on Terror. 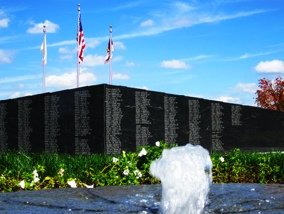 The first time I walked into the garden, I saw the names and messages inscribed in the entrance brick walkways.  I thought about getting a brick inscribed to honor my Dad’s service in WWII.  When I looked at the Wall of Valor for the first time, I saw a name that I had recently been researching for my Historical Novel.  George Ardey Billmeyer was a fallen soldier during WWI.  George is a grandson of Charles Billmeyer; one of the founders of the railcar building company Billmeyer & Small.

Although the garden is complete, I understand about 25% still needs to be raised to pay off all the outstanding costs.  I’m going to get three adjacent bricks inscribed as follows to honor the service of my Dad and my Nephew.  Why not consider doing likewise by inscribing several bricks.  Check the web site www.goldstargarden.com

Upcoming Talks:  On October 2, 2012, at the Lower Windsor Area Historical Society, I’ll be talking about the Dosch Burial Grounds.  This will be a journey back in time from the current Kohr ownership to the initial Onion ownership and will focus on each owners association with the burial ground on the farm.  I’ve already done posts about two of the early property owners, George Dosch and Michael Dosch.  John and Sarah Emig were the property owners the longest; 65-years.  They viewed this farm as their plantation near the river; when they weren’t busy founding Emigsville.  The property was also part of S. Forry Laucks’ Lauxmont Farms.

If you have an interest in the early industrial history of York County, I will be presenting two talks in November focusing on the 19th Century Railcar Builders of York, Pennsylvania.  A talk at the Osher Lifelong Learning Institute (OLLI) at Penn State York is set on November 7, 2012; you’ll learn about the many railcar builders in York and their effect on York County and the nation.

A talk at the Red Lion Area Historical Society is scheduled on November 29, 2012.  I’ll discuss key railcar builders in the York area and the impact these competitors had on influencing the route of the Peach Bottom Railway (predecessor of the Ma & Pa Railroad).  You’ll learn why the initial rail routes bypassed Red Lion and what ultimately resulted in the chosen route.

A Note of Thanks:  To Jim McClure for a nice introduction as a newly minted Yorkblogger.  I can’t believe that I’m already at post Number 25.