Upheaval at the One-Room Schoolhouse

One of the neat things about last week’s Unraveling York County History ‘Heroes and Villains’ event at Wyndridge Farm was meeting more readers who have shared memories appearing in my posts. I got to thank Brenda Knaub, in person, for her memory associated with the Longstown One-Room Schoolhouse,  when she approached me with a related question. Brenda asked, “what ever became of the school director who was arrested for his actions at the Longstown schoolhouse?”

As I researched that question, I discovered the 1912 incident, involving Springettsbury Township Independent School director Solomon Wambaugh, was widely reported. Later in this post, I’ve attached the complete article that appeared in the September 10, 1912, issue of The Philadelphia Inquirer. Quoting a few lines from that article: “Miss Hester Plymer, the school teacher, opened school this morning, and then Wambaugh appeared and ordered the children to leave. Miss Plymer ordered them to remain seated. Then, it is alleged, Wambaugh tipped the occupants from their seats and threw the seats outdoors.” Subsequent articles noted the school desks, such as those shown in the Pinterest photo, had not yet been fastened to the floor; as this was the first day of school in the newly build one-room schoolhouse and the refurbished desks were not placed in the building until the previous evening.

The September 18, 1912, issue of The York Daily reported that C. K. Baumeister, secretary of the Independent School District of Springettsbury Township brought charges of defacing school property against Solomon Wambaugh, a director in that school district. The newspaper was reporting on Alderman W. F. Owen’s decision that Wambaugh must face a court trial and noted the defendant made bail for his appearance.

The trial occurred in the week after New Years Day in 1913. The verdict was reported within an article in the January 7, 1913, issue of The York Daily. The headlines announced, “SCHOOL DIRECTOR FOUND NOT GUILTY;” quoting the whole article:

Solomon Wambaugh, a director of the independent school district of Springettsbury Township, was found not guilty in Judge Wanner’s court, yesterday, of a charge of maliciously defacing school property. The costs were apportioned by the jury between the school board and Mr. Wambaugh, the latter being ordered to pay one-third and the board two-thirds.

The suit was the result of a controversy between the defendant and the remaining members of the board as to the placing of desks in the new Longstown building. The board ordered the old desks formerly used in the [Lefever’s] school, near the Wrightsville Pike, to be put in the Longstown building. Mr. Wambaugh objected to the old desks and when school opened on Sept. 9, he appeared and forcibly carried out into the yard the desks that had been placed in the room. Later in the day they were put back in position and have remained there ever since.

It was stated that the desks were planed and varnished before being put into the Longstown room. Mr. Wambaugh did not cause any damage to the desks or building by his actions. He claimed that he asserted his right as director to take the steps he did in conserving the interests of the Longstown pupils and that he did not act with any malicious intent.

Frank Bortner represented Mr. Wambaugh and Vincent Keesey and District Attorney Sherwood the prosecution. The information upon which the suit was brought was made by Curvin Baumeister, secretary of the board, acting under instructions of the board at a hastily called meeting the night after the demonstration by Mr. Wambaugh took place.

This incident at the Longstown schoolhouse on September 9, 1912, was widely reported. A clipping of the complete article that appeared in the September 10, 1912, issue of The Philadelphia Inquirer follows. 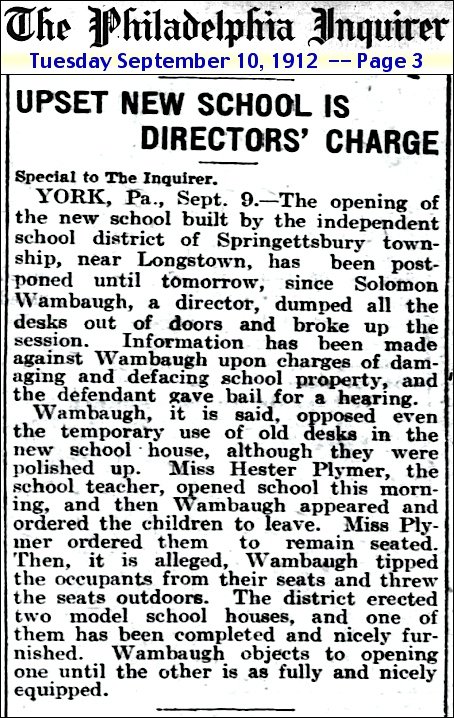 Even though Solomon Wambaugh was found not guilty, I was curious if he remained one of the directors of the Independent School District of Springettsbury Township. The York County History Center houses a collection of “Directories of the Teachers and School Directors of York County and York City.” From these directories, the Springettsbury Independent District school directors for the 1912-1913 school year were: Robert S. Frey, C. K. Baumeister, John S. Hiestand, Charles Lease and Solomon Wambaugh.

From the directories, the Springettsbury Independent District school directors for the 1913-1914 school year were: Robert S. Frey, C. K. Baumeister, John S. Hiestand, Charles Lease and Benjamin F. Horn. Therefore Mr. Wambaugh was replaced by Mr. Horn, another resident from the Longstown area. The new school director, Benjamin F. Horn, is the same individual who provided the lot on which the Longstown One-Room Schoolhouse was constructed.

Through the use of the school directories, plus newspaper articles, I put together a list of the teachers who taught at Longstown One-Room Schoolhouse. Maybe one of their descendents has a photo of the schoolhouse; that they’d like to share.