Continue reading to unlock the mystery of the Baltimore Factory of York Safe & Lock Company.

I wondered if Miller Safe & Lock Company was an offshoot, or successor, of the dominant safe and vault manufacturer in Baltimore at the turn of the century, The L. H. Miller Safe and Iron Works. Luke H. Miller began making safes in Baltimore before the Civil War. The company he founded was incorporated on October 23, 1899. The following page, advertising safes, is from the 1905 Baltimore City Directory. 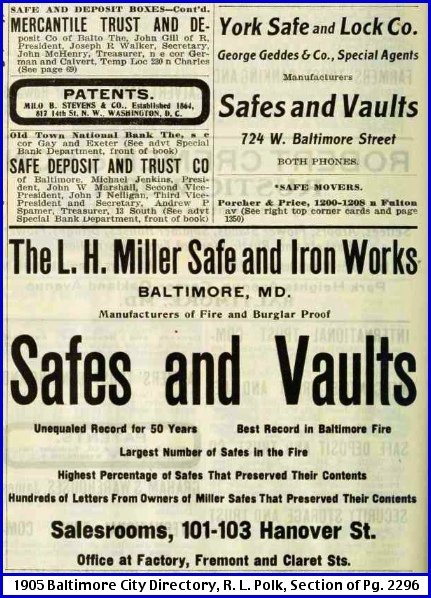 In 1905, the factory of the L. H. Miller Safe and Iron Works is located at Fremont and Claret Streets in Baltimore. Per the upper right, the York Safe and Lock Company had not yet established their direct sales office in Baltimore in 1905; they were using George Geddes & Company as their Special Agents. 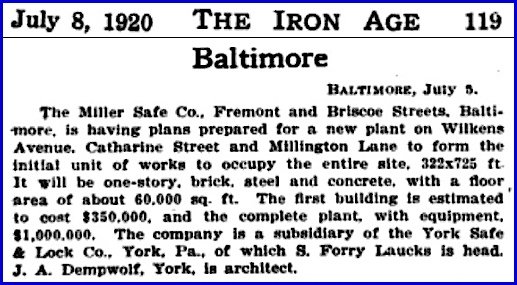 The Iron Age trade journal notes in its July 8, 1920, issue that the factory of The Miller Safe Company is located at Fremont and Briscoe Streets in Baltimore and they are preparing to build a new plant on Wilkens Avenue. Street records in the Baltimore City Archives state that Claret Alley is renamed Briscoe Street in the early 1900s. Therefore The Miller Safe Company is the successor to L. H. Miller Safe and Iron Works and becomes a subsidiary of the York Safe & Lock Company.

I was curious where the original plant of The Miller Safe Company was located. Looking at old Baltimore City maps and comparing to maps of today, at the present time you’ll find remnants of Fremont Avenue however no Briscoe Street. That is because the development of Oriole Park at Camden Yards removed all traces of Briscoe Street and the former Miller Safe Company plant site.

The following ad page from the 1923 Baltimore City Directory, shows the “Baltimore factory,” i.e. Miller Safe Company, of The York Safe and Lock Company is still operating as a completely separate subsidiary. Baltimore’s direct sales office of York Safe & Lock is located on Redwood Street as indicated in this 1923 Baltimore City Directory ad and as indicated in the company catalogs within the collection of York County Heritage Trust. 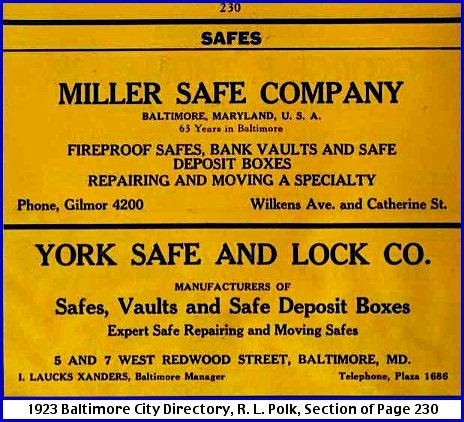 The J. A. Dempwolf designed plant of the Miller Safe Company still stands on the corner of Wilkens Avenue and Catherine Street in Baltimore. The following southward looking 2015 Bing.com Birds Eye View shows the complex of buildings.

This “Baltimore plant” of the York Safe & Lock Company was located about 2-miles west of Inner Harbor. This Miller Safe Company site had a railroad siding branching off the B & O Railroad. In all likelihood, items for the war effort were produced at this plant during WWII. Please comment if you can fill in some of the WWII details; or what happened to the plant after the 1946 Diebold acquisition of the York Safe & Lock Company.