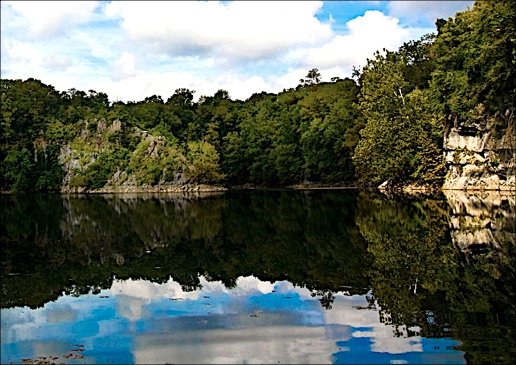 The Diverse Community at Union Stone Quarry near Saginaw

A large diverse community of quarry workers resided at Union Stone Quarry near Saginaw in York County during the early 1900s. The quarry ceased operation in 1936 and has since filled with water; as shown in the 2008 westward view of this quarry, near the Susquehanna River, in East Manchester Township.

Like the diverse community of Billmeyer in Lancaster County, directly across the Susquehanna River; the York County community, housing quarry workers, at the Union Stone Quarry, was multi-racial and multi-ethnic. Both communities consisted of a mix of blacks, largely recruited from the South, and recent European immigrants from a range of countries, plus regional whites.

The Union Stone Quarry was the second major quarry operated by the J. E. Baker Company. The quarry in Saginaw was found to contain a high calcium limestone and also dolomite. The Union Stone Quarry furnished stone, used as railroad ballast, to the Pennsylvania Railroad continuously from 1903 to 1930. The first major J. E. Baker quarry operations were nearby, at Billmeyer, just across the Susquehanna River, in Conoy Township, Lancaster County. The following 2019 Topographic Map shows the relative location of these quarries.

There were several smaller quarries in the early history of the J. E. Baker Company. Here is a brief timeline leading up to the quarries at Billmeyer and at Saginaw:

1887 In York, PA, John E. Baker, a Limeburner, married Mary Billmeyer; she is the daughter of Charles Billmeyer, one of the founders of the rail car manufacturer Billmeyer & Small.

1889 In Wrightsville, York Co., George S. Billmeyer, of Billmeyer & Small Co. and son of Charles Billmeyer, partners with brother-in-law John E. Baker in buying a quarry and lime kilns in Wrightsville; they call their 50/50 partnership the Wrightsville Lime Company.

1896 The Wrightsville Lime Company substantially expands by purchasing all the original Halderman properties in Conoy Township, Lancaster County, with all kilns and quarry included. This is first major quarry operated by the company; with the location named Billmeyer eight years later.

1902 John E. Baker leased a small quarry in East Manchester Township, York County, from John T. Dyer. It was located nearly directly across the Susquehanna River from the Conoy Township, Lancaster County quarry. The lease called for payment of a royalty for every ton of stone shipped.

1903 Union Stone Company is incorporated in 1903. John T. Dyer was President, J. E. Baker was Treasurer and George S. Billmeyer was Secretary. J. E. Baker owns half interest, for managing this quarry near Saginaw; then known as New Holland.

1917 John E. Baker buys out all other interests in the Union Stone Company, and become sole owner of the quarry north of Saginaw.

1923 The Union Stone Company is purchased by the J. E. Baker Company, and was known afterwards as the Union Plant. The plant at this quarry operated until 1936, when it was closed and dismantled.

The book “Through The Windows of Wickersham,” by Mrs. Paul Hiestand, is primarily a book about the Wickersham School, located just up the road from Billmeyer. However since some of the children from Billmeyer attended school there, Esther Hiestand included a history of that community. Quoting a few paragraphs from page 54:

“Billmeyer was not just a huge industrial operation; it was a complete community with homes, a general store, a church, and a school—everything a person needed to sustain body and soul. Between the train tracks and the river was a row of houses in which workers and their families lived. Blacks, Poles, Hungarians, and Italians lived side by side in peace and harmony.”

“A lot of the heavy work at Billmeyer was done by blacks who had been recruited in the South. Chief recruiter of the blacks was a large, well-dressed and generally impressive-looking black man named Harvey Arnett. He would go south, talk to black men there about the opportunities at Billmeyer and if they were interested, he would pay their transportation north.”

Esther Hiestand related, “By contemporary standards, life at Billmeyer in the 1920’s and ‘30’s seems hard, long hours, low pay, and dangerous work. It is remarkable, therefore, how many black people who were born and raised in Billmeyer, look back on their lives there with fond nostalgia. For black people especially, Billmeyer was a most unusual community. When segregation prevailed everywhere else, Billmeyer was an integrated community, where blacks and whites worked together, lived next door to each other, studied, and worshipped together.”

Dale Good wrote a detailed article about Harvey Arnett, which appeared in the January 2016 issue of Pennsylvania Mennonite Heritage. Dale used the 1920 United States Census of Conoy Township to look at the relative diversity of quarry workers at Billmeyer. He discovered: “About 40 percent were white immigrants from Europe; and 34 percent, African Americans (85 percent born in Virginia).”

I did the same type of analysis using the 1920 United States Census of East Manchester Township, near Saginaw. With the largest contingent of blacks being born in Virginia, and with the same scattering of other states, I suspect Harvey Arnett was also the recruiter of blacks for the Union Stone quarry.

The 1920 Census results: the Union Stone community consisted of 174 quarry workers; broken down into these groups: 34 blacks mainly from the South, 75 white recent European immigrants, and 65 white workers from other areas of Pennsylvania and other states. Some of these workers were married and had their families living in the community; the percent married were: 35% of the blacks, 17% of the immigrants, and 60% of the native whites.

The blacks were largely from Virginia; which is where 59% were born. The largest groups of European immigrants were: 31% from Austria, 15% from Russian Poland, 15% from Ireland, and 8% from Croatia.

Not all of the Union Stone Quarry workers lived in the community next to the quarry; it is estimated another 200 quarry workers commuted to and from this quarry. Newspapers list workers, black and white, from places such as York, which worked at Union Stone Quarry. They could have taken the Northern Central Railroad to the Mount Wolf station; which is only 2-miles from the quarry.

This is what the Union Stone Quarry & Saginaw area of East Manchester Township looked like in 1940; the earliest aerial photo available for this area. That is four years after the quarry shut down; with the quarry already filled with water. Saginaw had side-by-side one room schoolhouses since 1890; the Grammar building housing grades 5 to 8 and the Primary building housing grades 1 to 4. These schools were integrated.

The aerial photo is not detailed enough to determine the location of the company store, the four boarding houses, or where the majority of the individual and shared dwellings were located. If any of my readers have insight about these details, send me an E-mail.

The influenza epidemic of 1918 hit the communities at Union Stone Quarry and the Billmeyer Quarries hard. The following November 19, 1918 report from Saginaw is typical: “The influenza epidemic at the J. E. Baker quarries show no signs of abatement, a number of new cases having been reported yesterday. The disease had been on the wane, no new cases having been reported for two weeks. On Saturday four new cases developed.”

The major building surviving from the community at Union Stone Quarry is the community church, primarily constructed by the quarry workers during 1926. The story of this building is told on page 208 of “The History of The J. E. Baker Company,” by William H. Baker: “Mr. J. E. Baker furnished the stone and concrete for the building, along with ornamental glass windows. In addition, he contributed toward the interior furnishings and decorations.”

“The men of the Union Plant erected the building, and the women assisted by carrying in lumber and lime. This work was done in the evenings after working hours, and many in the community helped out. The cornerstone was laid on August 22, 1926 and the Church was dedicated in that following May. Patterned after an English parish church of the thirteenth century with a Norman tower for ornamental purposes, it is one of the loveliest and finest churches to be found in any small community.”

The following photo shows the community church, as it stands today, as “Saginaw Community United Methodist Church,” on the northeast corner of Market and 3rd Streets in Saginaw.

A big thank you to Jenny Brubaker for providing the references, “Through The Windows of Wickersham” and the January 2016 issue of “Pennsylvania Mennonite Heritage,” sourced in this post.