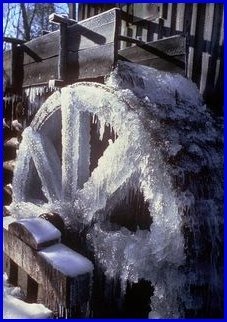 The above illustration shows the type of turbine water wheel installation done at Jacobs Mill in Paradise Township.  With the ice in the background, I’ve simulated freezing conditions in winter.  Being underwater, turbine water wheels required far less ice clearing when operating in the winter.

In the News-Comet article, through conversations and correspondence with Birdes A. Jacobs, Grant Voaden wrote that S. Morgan Smith delivered his first Turbine Water Wheel to Amos G. Jacobs’ grist mill near East Berlin in 1877.  Jacobs Mill was located about a mile southeast of East Berlin, just inside Paradise Township, York County, near the current crossroads of Jacobs Mill Road and Beaver Creek Road.

From the News-Comet, a newspaper published in East Berlin, PA, issue of January 17, 1947; page 1 & 5  (CONTINUED from Link).  This continues Mr. Birdes Jacobs’ own words condensed from six letters to the author; Grant Voadin.

“The first use of water power was to hull clover seed and then they put in a hemp stone and rubbed hemp, then an up and down sawmill to saw logs and then a run of stone choppers to grind feed, 3’-8” in diameter.  Then they built a woolen mill attached to the chopping and sawmill.  In this woolen mill they had carding machines, spinning machines, looms, full stocks for shrinking, all driven by water power.  They then used wooden overshot wheels on the gates of which they had large governors to hold the speed.

“They had dye houses and tenter bar frames and their dyes held.  They did not use tannin for the fixation of dyes but human urine, a French secret today.  They made flannels for women’s dresses and cassinettes (waist coatings) for men’s clothes.

“George II was my father’s grandfather and he died young about 1820.  It was the children of George II who developed the manufacturing end of Jacobs Mill.  At the death of George II his widow Mary Albert harnessed up the family and for 40 years was a sort of Catherine the Great over the whole bunch and just made things hum.

“One of the sons, George III, became an expert woolen miller, got tired of the yoke and built a small woolen mill of his own about a mile down the Beaver Creek.  His brother Isaiah became a homemade engineer, he keeping the dams, races and machinery of the home mill in first class running order.  Isaiah, a bachelor, with his mother reconstructed the mill, added a story and made part of it into a house.  He and his mother lived in it until his and his mother’s death (one month apart) in 1856.

“My father, Amos G., and my Uncle Cornelius (their father George III, too, having lately died) bought the farm and the mill property, renting the woolen mill but operating the sawmill and chopping mill themselves.

“This partnership lasted seven years.  This partnership was dissolved, my father, Amos G., taking the mill property and my Uncle Cornelius the farm property.  My father did not live in the mill but, at first, in an extra house on the mill property for a short time, when he in 1869 built for himself a new stone house.  About this time he remodeled the mill selling all the woolen machinery but the carding machines, putting in, in addition to the feed choppers, a pair of French Buhrs, bolt, smut machine, etc. for the making of wheat flour.  During the winter a great deal of rye flour was made.  This was ground on the chopping stones—French Buhrs no good for that—Jacobs Mill then carded wool, sawed logs into lumber (Up and down saw), ground feed on choppers and made wheat flour on French Buhrs.

“The streams were much stronger than what they are now and Jacobs Mill had almost more work than it could do.

“S. Morgan Smith was, I think, from North Carolina and was a minister in the Moravian Church and was Chaplain of the 200th Regiment Pennsylvania Volunteers in the Civil War.

“About this time, right after the Civil War, power people began tinkering with the idea of turbine water wheels which would eliminate ice cutting from wooden overshots in the winter which was dangerous and risky to life and health.  My father took kindly to the turbine idea and watched the development.  My father had employed an old millwright, Mr. Jesse Krall from near Kralltown, York County, Pa., who said the turbine fellows were too dumb to make water wheels.  If they would close the center of the runner and get the discharge more to the periphery of the runner they would get somewhere.

“Jesse Krall, belonged to the U. B. Church at Redmount near Kralltown and one day Mr. Smith, the Preacher, paid Mr. Krall a visit.

“At that time it was a common thing for ministers to visit parishioners and pillars of the church over a wide area and when they did come the family took the day off and a royal dinner was prepared because the family visited was highly honored.  Today’s religion is more of the push-button kind.  My impression of Mr. Smith is that he was ready to preach in any church that confessed and professed God, The Bible and its Christ.  Smith’s discussion with Krall about turbines was purely accidental my Dad said, with Krall leading off because dams and water wheels were his business (Millwright).  Providence, fate and destiny it seems to me were very busy that day.  In talking together Mr. Krall told the preacher about the dumbness of inventors, etc., and S. Morgan Smith got a brand new idea.  Mr. Smith went back to York and began working on this idea.

“About this time a Mr. Lamotte, whose first name I can’t recall (if I ever heard it), began working along the same idea.  Smith and Lamotte had a fight in the patent office, each claiming the right to the patent on just about the same idea.  The Patent Office decided the patent would go to the one showing priority on practical use and service.  It seems even the patent office was dubious.  Nobody wanted to buy the toy which posed for a water wheel to develop power.  My father had faith in it, and then Smith and Lamotte began to pester my father to build for him a turbine, one or the other was there every day.  He alone was a willing victim.  My father said he thought Smith got the idea from Jesse Krall and Smith should have the order.

Continue to the final installment of the News-Comet article.