TRUCKTOWN and the Truck Town Restaurant 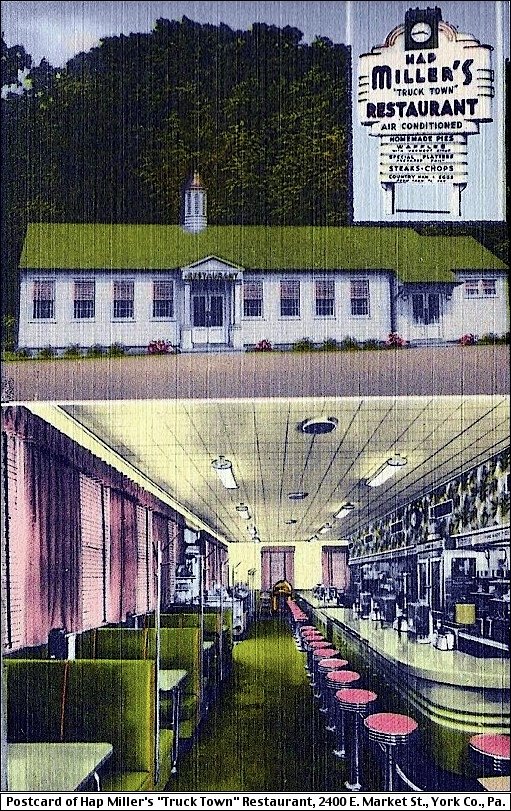 This linen postcard of Hap Miller’s ‘Truck Town’ Restaurant is from my collections. The postcard dates to the early 1950s, because ‘Truck Town’ in the name, was only used for the first few years the restaurant was in business; it opening in 1950.

As shown on the postcard, the sign contained a clock at the top. The smaller lettering included:

Why ‘Truck Town’ in the Restaurant Name?

The restaurant was built on a corner of the lot of Carl Beasley’s TRUCKTOWN. In fact, the restaurant and the truck dealership shared the same address; 2400 East Market Street. In The Gazette and Daily of February 20, 1950, Carl Beasley Company took out a nearly full-page ad inviting everybody to the opening of Hap Miller’s ‘Truck Town’ Restaurant. 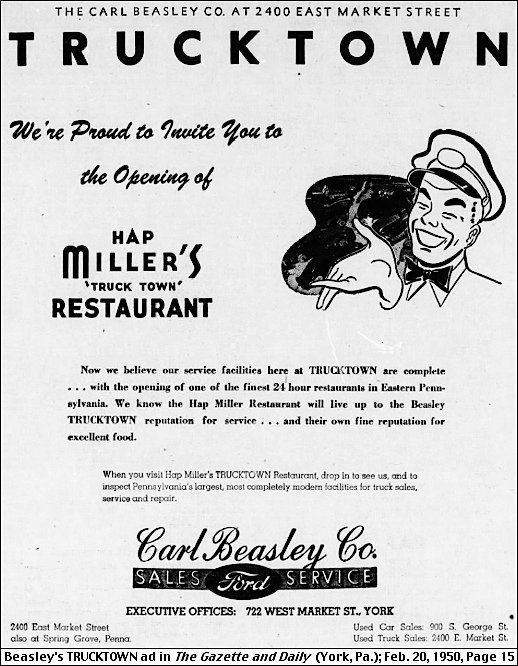 The smaller lettering in this Carl Beasley ad states:

Now we believe our service facilities here at TRUCKTOWN are complete . . . with the opening of one of the finest 24-hour restaurants in Eastern Pennsylvania. We know the Hap Miller Restaurant will live up to the Beasley TRUCKTOWN reputation for service . . . and their own fine reputation for excellent food.

When you visit Hap Miller’s TRUCKTOWN Restaurant, drop in to see us, and to inspect Pennsylvania’s largest, most completely modern facilities for truck sales, service and repair.

Continue reading for more details on TRUCKTOWN and the Truck Town Restaurant.

The following photo detail is from a Dave Allen aerial photo taken on August 10, 1949; which was one month before the Beasley truck dealership opened. Names of property owners from that time and road names have been annotated on this photo from the Collections of the Springettsbury Township Historic Preservation Committee. 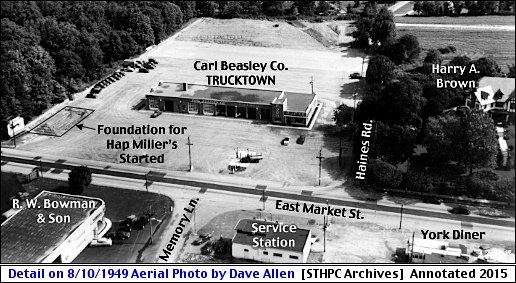 The 1949 photo shows the foundation for Hap Miller’s Restaurant has been started; a little over six months before their opening. The reason Hap Miller ceased using ‘Truck Town’ in the name of his restaurant; TRUCKTOWN was converted to a Lincoln-Mercury dealership in the mid-1950s; i.e. York Lincoln-Mercury.

Later York Lincoln-Mercury moved to a new facility near the South Queen Street exit of I-83. Then the former TRUCKTOWN became primarily a Hertz Car and Truck Rental facility; among several other uses, until the building was demolished when the new Weis Markets was built on the corner of East Market Street and Haines Road.

In The Gazette and Daily of February 20, 1950, Hap Miller announced the gala opening of Hap Miller’s ‘Truck Town’ Restaurant, that evening at 6 P.M. There would be door prizes, with the drawing at Midnight. 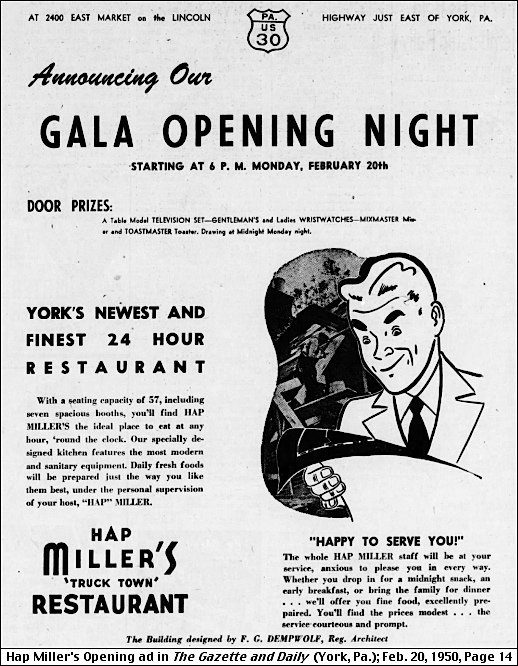 With a seating capacity of 57, including seven spacious booths, you’ll find HAP MILLER’S the ideal place to eat at any hour, ‘round the clock. Our specially designed kitchen features the most modern and sanitary equipment. Daily fresh foods will be prepared just the way you like them best, under the personal supervision of your host, “HAP” MILLER.

The whole HAP MILLER staff will be at your service, anxious to please you in every way. Whether you drop in for a midnight snack, an early breakfast, or bring the family for dinner . . . we’ll offer you fine food, excellently prepared. You’ll find the prices modest . . . the service courteous and prompt.

The last line of the ad states, “The Building designed by F. G. DEMPWOLF, Reg. Architect.” Related posts include: