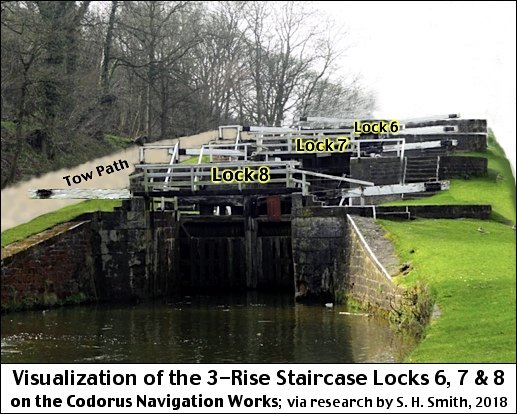 Part eleven explores the 3-Rise Staircase Locks 6, 7 & 8; required to travel by the highest dam on the Codorus Navigation Works.

Recall in part 2 of this series, canal engineer Simeon Guilford’s design for the lower half of the Codorus Navigation Works was quoted in the newspapers of late 1829, as: “In the Narrows, between Brillinger’s mill and Codorus forge, four dams will have to be erected—The first of these will be twenty-one feet high, requiring three locks of seven feet each to overcome a fall.”

After the Codorus Creek passes Brillinger’s Mill (i.e. at Route 24) and heads downstream through the Narrows, the creek bed drops much steeper then upstream. The research for this post was extensive; including everything from the study of several similar early 1800s slackwater navigation works, to more recent Army Corps flood plain data on the Codorus, to very recent Lidar data. The placement of the 21-feet high Dam 6 and the use of 3-Rise Staircase locks are the culmination of that research.

I’ve taken a photograph of a 3-Rise Staircase lock and made a few changes to better represent how Locks 6, 7 & 8 likely appeared around the bend from Dam 6 on the Codorus Creek in 1833. Click on this LINK for a yorkblog.com Full View of the three original illustrations in this post if details are cut off in the cropping of the illustrations, or if any have been removed from the ydr.com site.

Aerial visualizations detailing the placement of the 21-feet high Dam 6 and the 3-Rise Staircase locks are provided following the links and index to the first ten parts of this series: 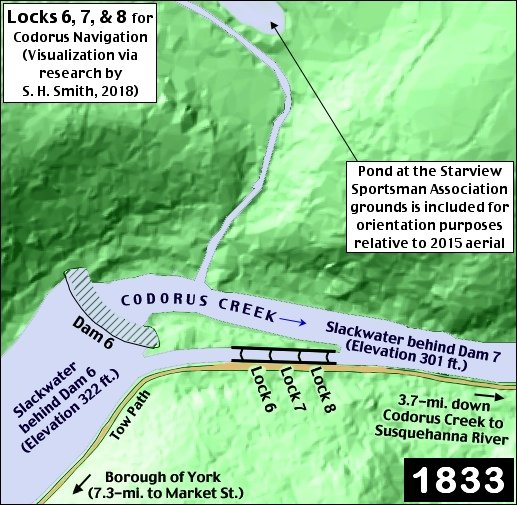 Locks 6, 7 & 8, in the 1833 illustration, are known as staircase locks; each allowing a canal boat to be lowered, or raised, a height of 7-feet. Combined, they allow a canal boat to travel by the 21-feet high Dam 6 and navigate between water elevations of 322-feet and 301-feet; the elevations of the slackwater pools on either side of Dam 6. That dam is located 7.3-miles, via the Codorus Creek, from the West Market Street landing of the Codorus Navigation Company, and located 3.7-miles from the Susquehanna River. 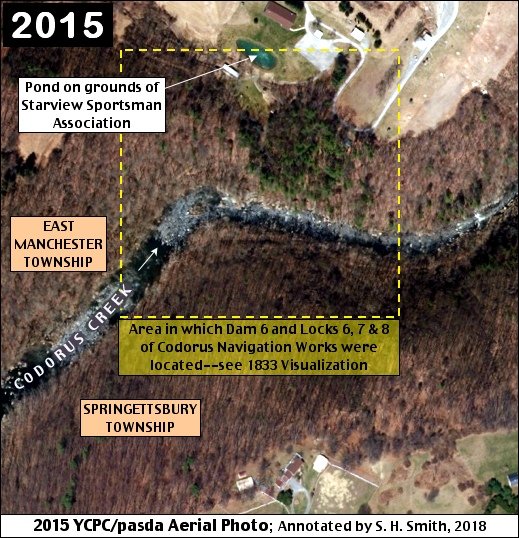